Are extraterrestrials watching what’s going on in Washington these days? It would be nice to know that someone or something is and perhaps that’s why some people believe they saw a UFO buzz past the US Capitol Building on a Fox News broadcast. Has this ever happened before? Yes! It turns out this year is the 65th anniversary of the 1952 UFO sighting that has come to be known as the Washington National Airport Sightings, the Invasion of Washington or the Washington Flap. Flap? Sounds like these sightings might be related. Let’s find out.

The 2017 Washington Flap II started on August 14 when a story about college interns on Capitol Hill showed a clip of the US Capitol Building that appeared to include a yellow saucer-shaped UFO flying in front of it. The blurry object appears to be much closer to the camera than to the Capitol, which prompted speculation that it’s a plastic flying disc (you know the brand), a flying creature or a CGI graphic. Are people REALLY tossing discs that close to Capitol security guards these days? And if it’s CGI, it’s pretty poor. Since there were no reports of any unknown aircraft breaching DC airspace on August 14 (Would we really hear about them? Definitely.) and the witness is one of the thousands of anonymous sources in DC, that’s all we have on this sighting. For now, you’ll have listen very hard to hear any flapping.

On the other hand, the flapping in 1952 was loud and clear.

"Never before or after did Project Blue Book and the Air Force undergo such a tidal wave of (UFO) reports."

Aerospace historian for the Smithsonian Institution and UFO skeptic Curtis Peebles sets the stage for the 1952 sightings – yes, there were more than one. At 11:40 p.m. on July 19, 1952, Washington National Airport (now known as Ronald Reagan Washington National Airport) air traffic controller Edward Nugent saw seven objects on his radar 15 miles (24 km) south-southwest of the city and notified his superior, Harry Barnes, who watched them with him. Upon checking, Nugent found that other controllers in the control tower and controllers at nearby Andrews Air Force Base also saw the UFOs, which had increased in number and were traveling randomly across the sky at an estimated 130 miles per hour. The objects vanished when two Air Force jets arrived and returned again after the jets left to refuel. 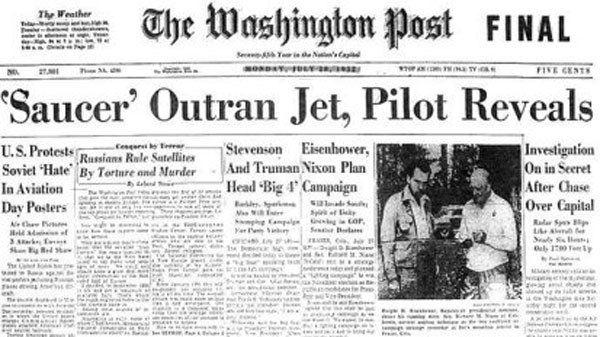 One week later on July 26, UFOs were spotted by a stewardess and a captain on a flight into Washington National Airport. The strange lights were seen by other pilots in the nearby airspace and an officer at Andrews Air Force Base.

Both incidents made national news and President Harry Truman demanded explanations. In what was called the largest Pentagon press conference since World War II, Air Force Major Generals John Samford and Roger Ramsey said the UFOs were “misidentified aerial phenomena” like stars or meteors and the blips on radar screens were caused by temperature inversions. A 1969 scientific report released by the Air Force concluded that a temperature inversion strong enough to create the radar blips was meteorologically impossible, but the theory has joined swamp gas and weather balloons in the annals of non-alien UFO explanations.

It doesn’t look like the 2017 Washington Invasion was a temperature inversion. Was it a toy disc, a bird or a bug? Possibly. CGI? Maybe. Will it go down in history like the 1952 Flap? Highly unlikely.

And whatever happened to those UFOs seen before and after the inauguration? Shouldn’t someone find out why those aliens haven’t done anything for us yet?

Or maybe they have.