We May Soon Be Eating Carbon Dioxide

One common solution to the problem of invasive species is to turn the animal or plant into food. Hence we have nutria burgers, Asian carp tacos and kudzu tea. Mmm. But what about something that’s not exactly invasive but is still a problem and getting worse … something like carbon dioxide? Believe it or not, a Finnish research group has developed a reactor that uses electricity to turn CO2 into edible protein. Are you ready for CO2 fondue? Fried dioxide? Fettuccini carbon-air-a?

"In practice, all the raw materials are available from the air. In the future, the technology can be transported to, for instance, deserts and other areas facing famine. One possible alternative is a home reactor, a type of domestic appliance that the consumer can use to produce the needed protein."

“All raw materials are available from the air.” This sounds like the opening line of a cookbook written by Nikola Tesla but it’s actually from a press release by Juha-Pekka Pitkänen, the principal scientist at VTT Technical Research Centre of Finland, one of the developers (with Lappeenranta University of Technology (LUT)) of the bioreactor that makes food fare from free air. Their Neo-Carbon Energy research project, also called Food from Electricity, has already created a prototype protein power plant they claim is 10 times more efficient than photosynthesis from plants. 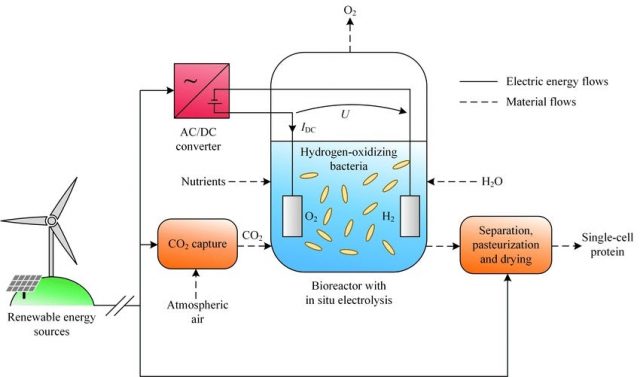 The raw materials in this process are carbon dioxide, water, microbes, and electricity. The first three are placed in a coffee-maker-sized bioreactor which passes an electric current through it. When you unscrew the top, what was once CO2, water and microbes is now a crumbly powder that is 50 percent protein, 25 percent carbohydrates and the rest fats and nucleic acids. And it’s gluten-free!

What’s the catch? There are a few. It took two weeks for the prototype bioreactor to make a gram of protein. That translates to months just to get a teaspoonful. The researchers expect the problem of speed and quantity to be resolved within a decade as it focuses on “reactor concepts, technology, improving efficiency, and controlling the process.” They also plan to incorporate solar power, which would make the entire process self-contained and waste-free.

All of that will be worth the wait … if this CO2 stuff tastes like steak, pizza, chocolate or whatever we want more of for less. Pitkänen has tried it and here’s his review:

“Currently, it has no particular flavor. Basically, if you think of dry yeast, it’s quite similar to that. Maybe even less taste. So it’s quite neutral.”

It’s always a bad sign when a food product is described as being perfect for animal feed. That’s also not the definition of a “this changes everything” product that could solve world hunger. Feeding cows and pigs throws costs and especially wastes right back into the picture. The goal of this project is noble and should be pursued. However, a true world-changing product would turn free air into free edible and tasty food using free sun … scaring the pants off of fossil-fuel companies and agribusinesses.

What would Tesla do?

Are UFO Abductees Being Secretly Watched?