Well, I guess I shouldn't have tempted fate by stating that my third article on nukes, nightmares and Mothman would be the final one. In fact, in no time after the article went live, I was contacted by a friend who suggested that I should read Warday, a 1984 novel written by Whitley Strieber and James Kunetka. I had actually read the book years ago, and it made for grim and disturbing reading. It's an excellently written book which tells the story of a limited nuclear attack on the United States, but which still kills more than sixty million people - from the initial atomic blasts, famine and starvation, radiation, and a wave of out-of-control influenza. Strieber and Kunetka skillfully tell a story that could, one day, become all too real. In Warday, the United States is a shell of its former self, with chaos, death and destruction rampant. Warday makes it very clear that had the confrontation between the United States and the old USSR escalated beyond a limited one, the result would have been unthinkable: complete and utter obliteration in the northern hemisphere. 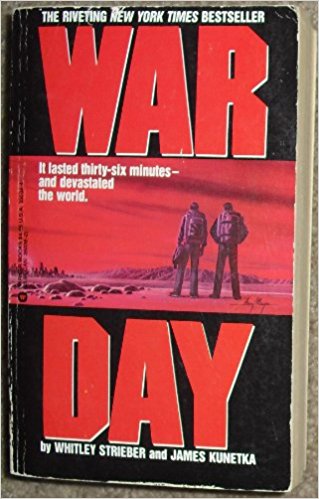 I asked: Why should I go back and read Warday now? I got a one sentence reply: "Check out pages 213-217." Now, admittedly, it was probably in the early 1990s when I read Warday, so I had forgotten many of the specifics of the story - beyond the crux of it. So, I checked out those pages. And, what did I find? Well, I'll tell you what I found: a 5-page chapter on a creature not at all unlike Mothman. This issue of a Mothman-type creature being associated with a devastating attack on the United States in fictional form (Warday, of course) eerily parallels what people are talking about now: dreams of a nuclear event and a tie-in with Mothman.

A couple of quotes from Warday will give you an idea of the nature of this aspect of the story. The title of the chapter is "Rumors: Mutants and Super-Beasts." We're told, under a heading of "Rumor," that, "...There is a gigantic beast with bat wings and red, burning eyes that has attacked adults and carried off children. The creature stands seven feet tall and makes a soft whistling noise. It is often seen on roofs in populated areas, but only at night."

A further extract concerns the testimony of an alleged eyewitness to the flying beast in California: "I had just gotten off the Glendale trolley when I heard this soft sort of cooing noise coming from the roof of a house. The sound was repeated and I turned to look toward the house. Standing on the roof was what looked like a man wrapped in a cloak. Then it spread its wings and whoosh! it was right on top of me."

It's important to note - in light of the Mothman-like references - that Warday is not a piece of wild science-fiction. The story is only included in the book to demonstrate how, in the aftermath of the war, strange and bizarre rumors surface and spread among the survivors. I did, however, find it intriguing that Warday makes a connection between a nuclear war and "a gigantic beast with bat wings and red, burning eyes." This is, of course, what is now being reported today.

Interestingly, in 1995, Strieber himself had a graphic dream of a nuclear explosion which destroys Washington, D.C. in 2036 - something which sees the end of the government as we know it today and the rise, in the wake of the disaster, of a dictatorship. In his 1997 book, The Secret School, Strieber says of this dream (or of a brief view of what is to come via a future self) that: "...Washington, D.C. is in ruins. However, this isn't the center of the memory. The center of the memory is that it was suddenly and completely destroyed by an atomic bomb, and nobody knows who detonated it."

So, on top of the Mothman/nuclear war/nightmares of right now, we have Strieber - way back in 1984 - linking a red-eyed, winged humanoid to nuclear war, and to a dark picture of the United States in just a couple of decades from now. Comments anyone?