Which comes first – the earthquake or the dead oarfish? That depends on who you ask. Coastal-living indigenous people around the world believe that the appearance of a dead oarfish or the killing of a live one are harbingers or possibly even causes of earthquakes and volcanic eruptions. Scientists and seismologists researching the phenomenon suggest the fissures caused by earthquakes at the bottom of the ocean release harmful gases like methane that kill the deep sea fish, causing them to float to the surface as a potential warning of more quakes. While we’re arguing about how Neptune might be involved in all of this (oarfish are believed to be his messengers), a dead one washed ashore in British Columbia, part of the ring of fire that has not been hit by the recent eruptions … yet. Should residents listen to the local Makah people, scientists … or both?

The Surrey Now-Leader, media provider for residents of Surrey in the metro Vancouver area of British Columbia, reported on September 21st that a dead oarfish washed up on Rattenbury Beach in Oak Bay, a seaside village on the southern tip of Vancouver Island. Fish finder Ben Baker said he thought it was an oarfish measuring nearly 3 meters (9.8 feet) in length. With no sign of Neptune in sight, someone got close enough to take photos, which were analyzed by a number of people, including biologist and marine educator Jackie Hildering, who identified the creature as a king-of-the-salmon (Trachiptreus altivelis). Should Vancouver residents, not to mention others living along the Pacific Ring of Fire – home of 90% of the world’s earthquakes – breath a sigh of relief?

Not really. The king-of-the-salmon is a lamprid or lampriforme which – to save you the trouble of Googling it – is a ribbonfish, a type of oarfish. The name comes from the indigenous Makah people who should know something about fish – because of their long history as whalers, they’re the only group allowed by the US government to hunt grew whales, although they’re limited to just one per year. They called Trachipterus altivelis the king of salmon because of their legend that this fish leads salmon up rivers to their spawning grounds. The bad news is, they also believe that killing one would also kill the salmon run for that year, not a good thing for those who depend on salmon for food. The myth is just that – the king-of-the-salmon prefers waters up to 3,000 feet deep along the east Pacific coast from Chile to Alaska.

Can British Columbia breath a sigh of relief now? 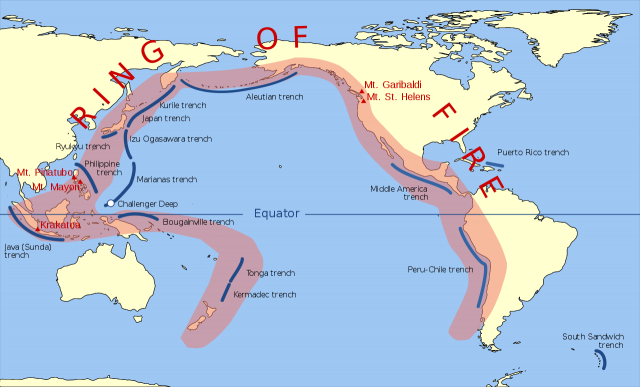 Not really. The king-of-the-salmon is still an oarfish, which makes it an earthquake alarmist, although not exactly a timely one. This oarfish showed up AFTER the recent Mexico quake, the 6.1 magnitude quake in New Zealand, the 6.1 quake off the east coast of Honshu, Japan, and the 6.4 quake on the South Pacific island of Vanuatu. It doesn’t take a dead fish – Neptune-sent or otherwise – to figure that something is going on all around the Ring of Fire.

Should residents of Vancouver or coastal British Columbia be nervous? Well, they do live on the Ring of Fire. Should Oak Bay residents be worried? Definitely. Ben Baker says a biologist told him to take the king-of-the-salmon/oarfish home and keep it in his freezer in case any researchers (or possibly Makah people?) want to examine it further.

"It's a real treat and privilege to have found it. Things like this are why I love living in the Oak Bay area."

At least until the ground starts shaking under the freezer.