She’s Hollywood royalty, an Emmy and Academy Award winning actress and a successful and sometimes controversial business owner. However, she’s not the first person you think of when you think of vampire repellents. (Who DO you think of? Keith Richards?) Yet Gwyneth Paltrow is now making another name for herself as a purveyor of products to protect from pale bloodsuckers. Will her next role be Buffy the Vampire Sprayer?

A spray-able elixir we can all get behind, this protective mist uses a combination of gem healing and deeply aromatic therapeutic oils, reported to banish bad vibes (and shield you from the people who may be causing them). Fans spray generously around their heads to safeguard their auras.

That’s the ad on Goop for Psychic Vampire Repellent ($30 plus tax and shipping for a 3.4 oz./ 100 ml bottle). While garlic, holy water and a crucifix are the primary tools most people would carry to a vampire meeting, none of those are on the list of ingredients. For that matter, those fearing ethnic vampires around the world should note that the little spray bottle doesn’t contain thorns (Malaysia), fat from an impodulu (South Africa – it’s a mythical bird) or sand (Caribbean islands). 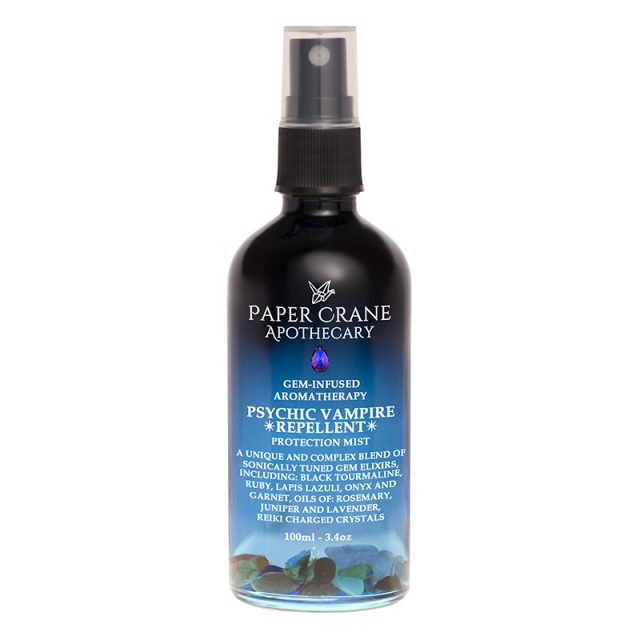 In fact, if you read the label carefully (Is it too late? Did you already order a case to protect from that strange family that just moved in the old house down the street?), you’ll find these ingredients listed:

Sound waves in a bottle? If you hold it to your hear and shake it, will you hear “If I Was a Vampire” by Marilyn Manson? Not a wooden stake or even an essence of wooden stake in the lot. You’ll also notice that the first word in the product name is “Psychic.” That’s a big clue we’re not talking about bloodsuckers but emotion suckers – those psychic vampires who drain your feelings, your energy and your auric life force. Or, in Psychic Vampire Repellent terms, people who cause bad vibes. Holy water and garlic won’t repel them but apparently gem elixers, sounds waves and liquid moonlight do.

Liquid moonlight? That’s a great name for a band but how do you get FDA approval for use on vampires? Unfortunately, Gwyneth hasn’t figured that part out yet. Did you open your bottle already? Too bad. The return policy clearly states (you did read it, didn’t you?) that the repellent can only be returned if it’s “unused, with tags, in its original packaging.”

I’ll bet that sucked the aura right out of you, especially if you still have that creepy family to deal with. Here’s something that might help you banish some bad vibes. Watch Shakespeare in Love and spray the screen when Gwyneth is on. But be careful … it contains liquid rocks.