The infamous ‘Alien Autopsy’ film about the alleged operations performed on the body of a suspected extraterrestrial reportedly recovered from the still-unproven 1947 crash of a purported alien spacecraft near Roswell, New Mexico (is that enough qualifications?) is the movie that wouldn’t die. Released in 1995 as part of a Fox network special called Alien Autopsy: Fact or Fiction, it was revealed in 2006 to be a “restoration” by a filmmaker who claimed to have faithfully recreated the original which he had seen before it deteriorated beyond use. Now, another party in this “restoration” has opened a one-man show on London’s East End giving his version of the story. What’s next – a Broadway musical? (Seriously, if anyone reading this is interested, I’m available to write the book and lyrics.) 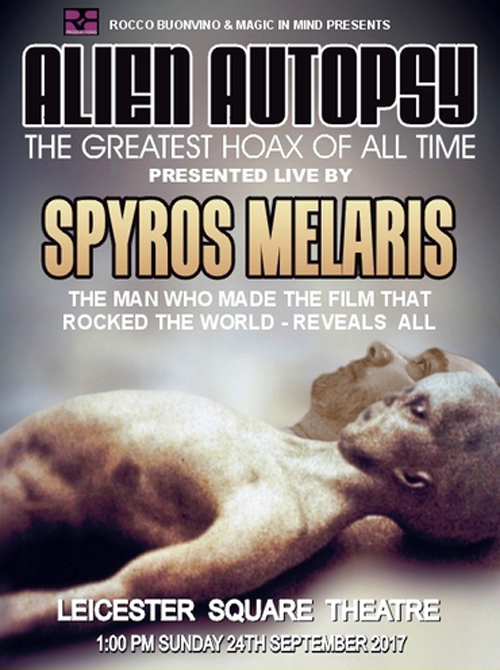 “In 1995, Spyros Melaris created an illusion of global significance. His mission was to create something so unusual, so disturbing that it would rock the world. ‘The Alien Autopsy’ was not just a hoax. It challenged belief systems. It asked, “Do Aliens exist, and are they visiting our planet?” The film fooled NASA, Kodak and every expert who had a say in the subject including the Queens Pathologist. The film maintained its integrity for 15 years until Melaris and his crew revealed the truth. In this show presentation Melaris has prepared slides, film and inside secrets. A truly interactive presentation, where you can ask questions about any aspect of the film and Melaris will reveal all.”

That’s the description from the Leicester Square Theatre in London where the show opened on September 24th. The “one-man” is Spyros Melaris, one of the lesser-known characters in this film’s sordid past. He claims he was the director of the film and the one responsible for creating the fake aliens and other special effects. Melaris says he met Ray Santilli, the producer and name most associated with the autopsy film, in 1995 at a music event in Cannes. Santilli later confided that he had the actual footage of an alien autopsy and wanted Melaris to make a documentary about it.

However, when Santilli showed him a copy of the alleged ‘real’ film, Melaris determined it was a fake shot on video. He says he instead agreed to make a fake version of the autopsy on film, release it as the real thing and them make another documentary on how they pulled off the fake. He hired John Humphreys, a special effects expert who has worked on Dr. Who, to make the alien’s body using his 10-year-old son as a model. Melaris bought 1940s surgical outfits, used cow, sheep, pig and lamb organs (the local butcher must have loved them) for the alien’s internal parts and spliced in footage from a 1947 newsreel. He also claims he built the fake wreckage and hired all of the actors.

As those in ufology know, the ruse worked. Fox television broadcast the “footage” on August 28, 1995, and twice more within a few months, getting huge ratings each time. While a number of people doubted its authenticity, it was not disproven until 2006 when Ray Santilli and fellow producer Gary Shoefield admitted that their film was actually a "reconstruction" but still said the a real film existed and they used a few frames of it, although they wouldn’t say which ones.

While he has admitted to making the fake film before, now Melaris gone to the London stage to declare to the world beyond ufology that there was never a real alien autopsy film that the fake was based on. Why now? He answers in a Metro interview:

"For me, it was just a joke, a bit of fun but I have learnt my lesson. I would like to say now that there is a big part of me that feels remorse. I underestimated the response. The reality is that everybody in the UFO community took this film as the smoking gun, proof of UFOs and aliens."

An act of contrition for one of the biggest hoaxes in history.

Hello ET: The Musical with songs like "There's No Business Like UFO Business," "If I Were a Space Man," "Ignoring Gravity," "The Impossible Scheme" and "You'll Never Fly Alone."