It’s bad news when giant holes open in the middle of neighborhoods, swallowing cars and occasionally people into abysses formed by erosion, abandoned mines or faulty construction. It’s worse news when giant holes open in Siberia, releasing methane gas that was kept in check until climate change changed the permafrost. Now there are reports that massive holes are suddenly appearing in the world's largest glacier. Another sign of the apocalypse? Are we running out of places to move (or hide)?

"There was 100 meters of thick glacier before Now we see it down in a rock that has not been seen before.” 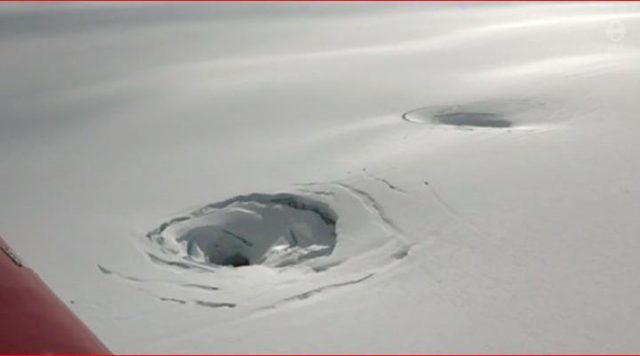 Magnús Tumi Gudmundsson, Professor of Geophysics at the University of Iceland, broke this bad news to his country in an interview (Google translation in English) with RUV, Iceland's national public-service broadcasting organization. He has photographed holes that were up to 400 meters (1300 feet) wide in Vatnajökull, the glacier that covers over 8 percent of Iceland and is considered to be the world’s largest in volume and second-largest in mass. Are those records now in jeopardy?

"If geothermal growth grows considerably, water could accumulate in the box, and there may be a risk of jökulhlaup. But we do not know that it's going to happen yet. "

The ‘geothermal growth’ he refers to is from Bardarbunga, the stratovolcano located under Vatnajökull. It’s the second highest mountain in Iceland (2,009 meters or 6,591 ft) and part of the large volcanic system crossing the country that’s responsible for the earthquakes in 2014 and 2015 that caused glacial depressions and six months of fissure eruptions in the Holuhraun lava field. The ‘jökulhlaup’ is an Icelandic geophysical term referring to a glacial outburst flood or any large and abrupt release of water from a subglacial reservoir.

In simpler terms, Bardarbunga is creating hot spots that are melting the glacial ice at an unprecedented rate, opening large holes that reveal ground that hasn’t seen sunlight in thousands of years and threatening to release floods of melted glacier and trapped glacial lakes. In a sense, these are like the calderas or craters that form when the top of a volcano collapses. The difference in Iceland is that the volcano is hidden deep beneath the worlds largest glacier. That exposes Icelanders to a double whammy of lava and water floods anywhere one of these holes opens up. Yikes!

Being a true geophysicist, Magnús Tumi actually sees a bright side to the dark, icy holes:

“So it can be said that Bárðarbunga in the wake of these events, it only gives us the opportunity to show the country that has been a glacier concealed for centuries if not thousands of years.”

However, it’s hard to get a good look over your shoulder as you’re running away from an impending eruption.