On August 30, I wrote an article here at Mysterious Universe on the subject of the resident lake monster(s) of Bala Lake, Wales. It's a story that is far less well known than that of its Scottish cousin, Nessie, but it's no less intriguing. As I noted in the article: "If you’re into the subject of Cryptozoology, you will probably be familiar with a presently unidentified critter that is alleged to haunt the waters of Bala Lake, in Gwynedd, Wales (you can find one of my articles on the story here). It’s a very weird tale which is filled with intrigue and drama. And even a bit of conspiracy."

There is a very good chance, as I suggested in my article, that the lake's resident monsters may actually be massive pike. After all, most people would likely agree that anyone calling a marauding, ten-foot-long, violent pike a "monster" would be more than justified in doing so. Not as exciting as a plesiosaur, but you can't have everything!

Well, in the wake of the publication of the article, Roland Watson - the author of an excellent book, The Water Horses of Loch Ness - wrote his very own article on the Bala Lake affair. Roland stated: "Having seen Nick Redfern's recent interesting article on the Lake Bala Monster, it brought to my mind an article I had on the creature from years back plus some recent thoughts I had on the phenomenon. The article is from issue 82 of the Fortean Times dated August 1995..."

The Fortean Times article that Roland refers to is titled "Teggie & Other Beasts of Bala." It states, in part: "Early last March, brothers Andrew and Paul Delaney from London were fishing on Lake Bala in Gwynedd, North Wales. 'It was very calm and we were about to finish when we noticed something coming up to the surface about 80 yards from the boat. At first we thought it was a tree trunk. Then it straightened up and towered 10 feet in the air. It had a small head and a long neck, like pictures of the Loch Ness Monster.'" 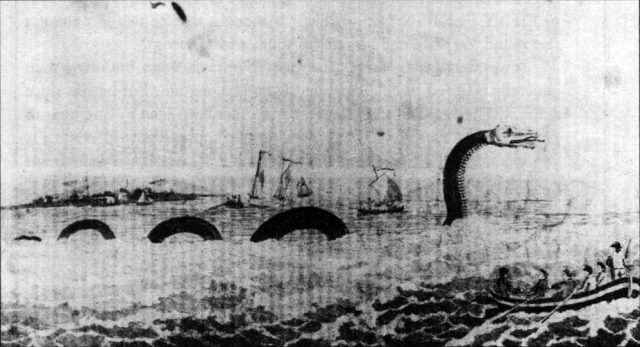 Interestingly, at the time, 1995, the article prompted feedback from one of the readers of Fortean Times. It was feedback concerning a sighting of a large, unidentified animal in Bala Lake "about 12 years ago," which would have put things around 1983 (ish). The letter-writer told Fortean Times: "...the car park attendant at the lake side told me he'd once witnessed an animal swim from one side of the lake to the other. 'It was as long as three dogs swimming together,' he told me, and resembled a hump protruding from the water." Interestingly, the same FT source added that around 1990 he/she was back at Bala Lake and discussed the matter with staff at the local tourist center. One of them said that she suspected what people were seeing was a large pike.

A drawing of the monster was done by Craig Boscombe of the Liverpool Echo newspaper, about which Roland Watson says: "Nick's article about a possible 10 foot pike does in fact make some sense looking at the sketch...done by Craig Boscombe. After all, a crocodile head is not too dissimilar to that of a pike. Having said that, the Delaney brothers' account is distinctly more in line with the traditional long neck ascribed to lake cryptids."

None of this definitively proves that the Bala Lake monster is a pike - and, admittedly, there is the issue of the long-neck to which two witnesses referred. But, that single case aside, the chances are looking more and more likely that the creatures are indeed pike. I say "creatures," rather than "creature," because most pike have a maximum lifespan of around five to ten years - at the very most. But, there are reports of monstrous fish in the lake dating back decades. So, either we are dealing with one, extraordinarily large, and incredibly long-lived pike, or there must be more than a few of them. But, that doesn't explain how or why the pike of Bala Lake might be reaching such incredible lengths of around ten-feet, or, as some have suggested, even longer. I'm as certain as I can be that we are specifically not dealing with unknown animals, but there is definitely a mystery to be solved.