Mysterious Voynich Manuscript May Have Been a Health Manual

In an article in the Times Literary Supplement, Nicholas Gibbs, the aforementioned British expert, claims he solved the Voynich manuscript by comparing its pictures not to words or letters but to Latin ligatures. Ligature is a typographical or writing term used to describe when two or more letters are combined into one glyph or symbol. You may think you’ve never seen one of these & you would be wrong … you just did. The ampersand (&) was created when the letters E and t were merged to form the Latin word "et" which meant ‘and’.

Medieval Latin had many litagures that are no longer in use today. Gibbs believes the author of the Voynich manuscript called upon the technique of the verbal litagure to create pictorial litagures by combining known images into unidentifiable ones. Why would the author do such a thing? Gibbs thinks it was to hide the fact the manuscript is actually a health manual written for a “well-to-do lady” to help treat gynecological problems.

Well, there ARE all of those pictures of naked women in the codex. Gibbs spent three years staring at them -- along with the plants, zodiac charts and other strange images – and concluded that the paintings are visual shortcuts depicting treatments and cures for various medieval “lady” problems. He believes the combination of naked women and flowers is a prescription for aromatherapy, and the naked women-flowers-water combo is recommending soaking in herb-infused baths for gynecological issues. 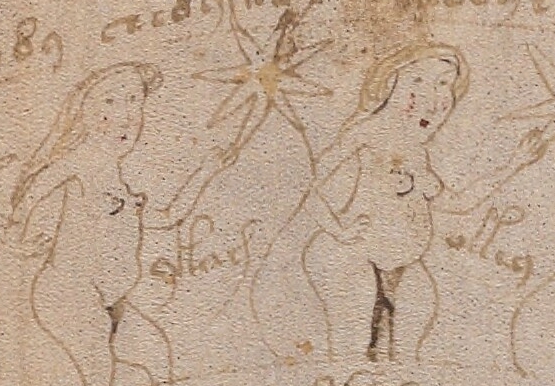 OK, that’s two. What about the rest? Gibbs admits he can’t figure out all of the pictures yet and he blames this on a missing index.

“For the sake of brevity, the name of both plant and malaise were superfluous in the text so long as they could be found in the indexes matched with a page number.”

You know, if the Voynich manuscript had an index, we wouldn’t need Mr. Gibbs either.

Still, it’s an interesting theory and one worth pursuing, especially since no one – in fact, no computer either – has been able to solve the Voynich manuscript. That includes the Russian mathematicians who earlier this year claimed it can be decoded by removing all of the vowels and spaces and comparing it to English, German and Spanish. They have a long way to go, although they may work a little harder if they know it’s a gynecological health manual.

In fact, that should help sales of the 898 clones of the Voynich manuscript currently being printed. Who knew it came with a centerfold?