Take the Beef Tongue and cut a slit in it … cover with more of the peppers, salt, hot sauce and chilies … take tongue, whiskey, black candle, green candle, and lighter or matches to a deserted or quiet railroad crossing … ask the God of Iron, Ogun, to take care of this person for you, who keeps “wagging their tongue” in malicious gossip about you.

Does it work? Not for one person who tried a version of this Hoodoo Beef Tongue “Shut Mouth” Spell to avoid an FBI investigation into a $20 million Ponzi scheme. Was it an old beef tongue? The wrong whisky? 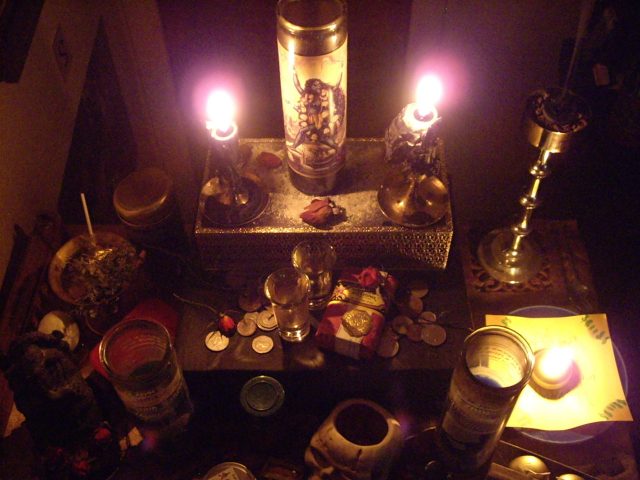 The investigation concerns Dawn Bennett, the former host of "Financial Myth Busting with Dawn Bennett," who was accused of diverted about half of what she raised in a 2-1/2 year Ponzi scheme (promising a 15 percent return on investments) to repay earlier investors, buy dozens of pairs of shoes and other luxuries and pay rent on a luxury suite at AT&T Stadium, home of the Dallas Cowboys.

After a bank in Maryland questioned why an 80-year-old client was making a large wire-transfer payment, the Securites and Exchange Commission initiated an investigation into Bennett’s DJB Holding LLC and found evidence to contend that it fraudulently raised about $20 million between December 2014 and July 2017 targeting elderly and “financially unsophisticated” investors.

In addition to hiring the best lawyers ill-gotten money could buy, Bennett apparently also went to a hoodoo spell shop for some magic assistance. In a raid on her penthouse in Maryland, FBI agents found two freezers filled with sealed Mason jars bearing the initials of U.S. Securities and Exchange Commission lawyers and instructions for casting a Beef Tongue Shut Up Hoodoo Spell on them.

A what? Here’s a definition from conjuredoctor.com:

Hoodoo (also known as rootwork) is Southern folk magic grounded in centuries of African American heritage within the southern United States. Hoodoo is often known by other names including: conjure, rootwork, root doctoring, laying tricks, working roots or doing the "work". It is important to note, that contrary to what some authors may write in their books, Hoodoo is NOT Voodoo (Vodou).

FBI Special Agent Keith Custer detailed in an affidavit what the agents found:

“ … instructions for a “Beef Tongue Shut Up Hoodoo Spell.” Custer said these called for a spell-caster to say the name of the individual targeted by the “hoodoo spell,” synonymous with a “voodoo spell,” followed by “I cross and cover you[,] come under my command[.] I command you to hold your tongue.” Consistent with those instructions, Custer said agents also found the Mason jars, “suggesting that Bennett had many times cast a ‘hoodoo spell’ in hopes of paranormally silencing the SEC attorneys investigating Bennett.”

Before you go running to the butcher shop to take care of the troll besmirching your name on Facebook, note that the lawyers named on the jars filed a federal criminal complaint in U.S. District Court against Bennett for wire fraud, bank fraud and false statements in relation to loan and credit applications and she was arrested on Aug. 25 in Santa Fe, N.M.

For more on hoodoo and a recipe for the Beef Tongue Shut Up Hoodoo Spell (caveat emptor), check out the conjuredoctor.com website.