If you know anything about Zombies (specifically the fictional, virus-driven, and always-hungry kind), you'll know that the most dangerous parts of these rampaging monsters are their heads. Or, to be completely accurate, their mouths. You don't have to be a fan of the risen dead to be aware that it's the bites which turn a regular person into an almost-unstoppable monster. And, usually, in just a matter of hours. Or, in the case of 28 Days Later (in which the infected are not, technically-speaking, zombies) in no more than a handful of seconds. There is another reason why the head of the zombie is such a hazard to the characters on the likes of The Walking Dead. If you decapitate a zombie, the head still "lives," snapping and staring at the tasty meal it sees before it. That's us, by the way. Only by piercing the brain can the head no longer be considered dangerous.

Of course, zombies of the kind seen on countless TV shows and in big-bucks Hollywood movies are strictly fictional. Perhaps, one day, a lethal virus really will decimate the human race. But, even if such a nightmarish thing occurs, we won't see the infected and the dead rising from the grave. Why not? Because it's not possible, that's why! Zombies are great fun, and I love The Walking Dead (although I gave up on Fear the Walking Dead quite a while back). But, it's just entertainment. No-one needs to worry about ever becoming one of the "less than the living." And, no, you won't have to stress about a decapitated head ending your life in horrific fashion. But, centuries ago, that really was a legitimate fear - and even a reality, too. Huh??? Yep. Read on...

The 14th century was filled with dangerous days. It was in this long-gone era that the powerful and ruthless Mongol Empire flexed its collective muscles in a very strange and alternative way. At the time in question, the siege of Kaffa was afoot. It so happens that at the very same time, the much-feared Black Death was spreading like wildfire.

As evidence of this, million of people, in Europe, lost their lives to the deadly plague. And in just a two year period: 1348 to 1350. As for the infamous name of the Black Death, it was derived from the widespread skin-blackening caused by rampant hemorrhages. Not a nice way to shuffle off, to be sure. It was at the height of the chaos and the apocalyptic atmosphere that the Mongols came up with a decidedly alternative way to defeat their foes. 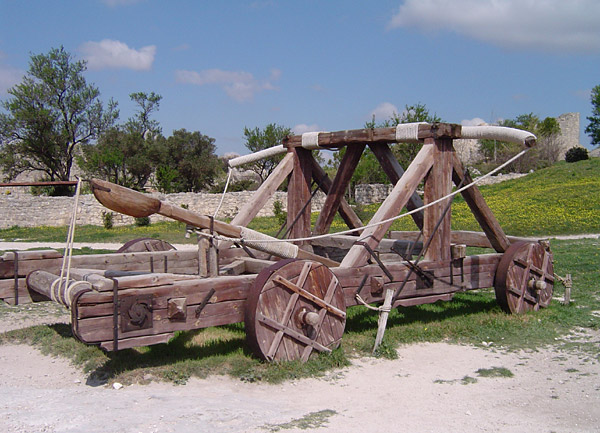 The Mongols, who were going down with the Black Death, quickly took hold of their newly dead and did something decidedly unusual: they chopped off the heads of some of the dead. The heads were then placed into massive catapults, which propelled the heads high above the landscape and over the well-guarded walls of Kaffa. Corpses, too, sailed through the air and hit their targets. In scarcely no time at all, infection from the plague - rained down from the skies above - set in and caused chaos throughout Kaffa. And it was all down to those heads. There have been suggestions that the outbreak in Kaffa had more to do with the local rat population. Yet, the tales of the attacks by catapult still endure.

So, yes, in a way there have been examples in the past of how the heads of the dead have posed a very real threat to the human race. No, it's not exactly a zombie apocalypse, but it's probably the closest, real thing we have ever seen to the scenarios that play out in The Walking Dead. And ever will see.