Zombies – In The Flesh

With the new season of The Walking Dead not too far away, I thought it would be a good time to profile a now-defunct BBC show that ran for a couple of years and which took a very different approach to the angle of a zombie apocalypse. The show was called In the Flesh and it ran from 2013 to 2014. It's a fact that most productions of the zombie kind focus on the outbreak of the disaster and the rapid collapse of society, as the survivors do their utmost to fight off the onslaught. In the Flesh, however, takes us down a highly alternative pathway.

Dominic Mitchell's In the Flesh begins specifically after the rise of the zombies began and at a time when the outbreak has been successfully contained. The undead have been reeled in and placed in secure facilities - for the safety of everyone. Not only that, the U.K. Government has managed to find an antidote to the virus that brought the dead back to some form of violent, marauding life. The not quite dead are given daily injections of the serum - something which sees the minds of the zombies return to their normal, human states. The problem, though, is that the dead remain dead - of course! The minds and characters of the zombies are restored, but they remain pale and sickly-looking, and their eyes are eerie, milk-white in color. And they can no longer eat food. The government, however, embarks on a huge program to try and reinsert the dead into regular society - in the hope that the country and its people can move on and put the turbulent times behind them. If only it was that easy.

Tens of millions of Brits cannot rid their minds of the zombie outbreak and they remain deeply suspicious of the dead - who are quickly known by one and all as the "Rotters." The people also have concerns about the fact that, unless they get their daily shots, the dead begin to revert back to their monstrous, killer ways. The government comes up with what it considers is a good idea. The dead - who the government now claim are not zombies, but people with "Partially Deceased Syndrome," or PDS - are given human-looking contact lenses to make their eyes look normal. And, they are all issued with make-up kits so that they can make their faces and hands look healthy and human. If they look human, they will be treated like regular people, right? In theory? Yes. In the show? Nope. 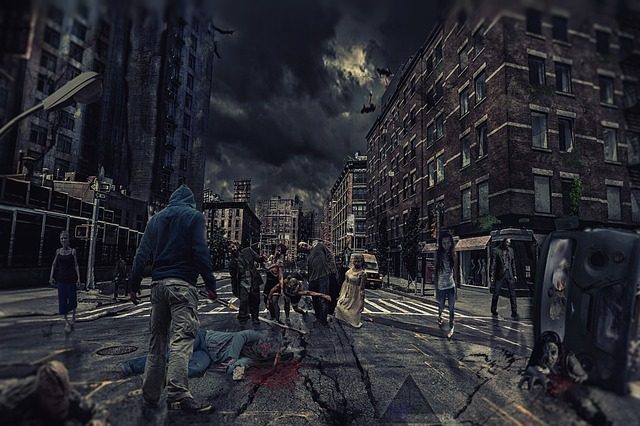 The primary character in the show is Kieren Walker, a young man who - after having his mind restored to normality - returns to the family home in the English town of Roarton. The locals don't like Walker at all: some want him gone. And not just ejected from the town, but terminated permanently. On top of that, before the apocalypse began, Walker was living a secretly gay life. So, in at least some respects, the prejudice exhibited by the locals in Roarton is an allegory to homophobia.

All in all, In the Flesh is far less a saga about zombies, but far more about the dark side of human nature, the mob mentality, and how fear-mongering can take hold when hysteria and fear are just about everywhere. It is the humans of In the Flesh who are the violent ones, ready to wipe out the "partially deceased" at any given moment. The zombies, meanwhile, just want to be left alone to get on with their admittedly strange and even grim lives. If you're into zombie productions, and you haven't seen In the Flesh, you really should: it provides a thought-provoking twist on regular zombie lore.