In the excitement that often accompanies big archeological discoveries, it’s usually pointed out how difficult it was to get to the place where they were found. However, it’s rarely noted that the artifacts belonged to ancient cultures who actually lived in that remote place and under the same harsh conditions without a problem. Such a place is the Himalayas, where a recent combined Russian-Indian expedition that has been searching the mountain area bordering India and Pakistan for three years found two unusual caches of stone figures dating back to the early Middle Ages (5th century CE) showing anywhere from one to four people riding sitting on a single horse. Who carved these sculptures and why? Was this area the first to develop public transportation?

According to the Russian news agency RIA Novosti, the expedition was led by Corresponding Member of the Russian Academy of Sciences Natalia Poslomak, who seems to have a knack for fantastic finds in frigid fields. In 1993, Polosmak, a specialist in ancient Siberian cultures, was digging on the Ukok Plateau when she found what has come to be known as the Ice Maiden – a mummy preserved in the frozen permafrost wearing the beautiful clothing of a woman with a high social status whose attire and tattoos associate her with the Pazyryk people dating back to the Iron Age, around the 5th century BCE. The location on the Russia-China border, the uproar by indigenous peoples over disturbing the dead, and the fear of a curse – the area was hit by an earthquake in 2003 – made the Ice Maiden both archeologically and politically controversial.

Will the strange stone horse riders bring Poslomak similar problems? The sculptures were discovered in the Kashmir Province of India on the Pakistani border by an expedition led by a Russian and funded by Russian and German backers – no potential for controversies there, right? Vyacheslav Molodin, deputy director of the Institute of Archeology and Ethnography of the Siberian Branch of the Russian Academy of Sciences, announced the find to journalists last week. He said the approximately 200 statues were of the same style – people on horses – but each was unique in design and “richly decorated with carvings.” 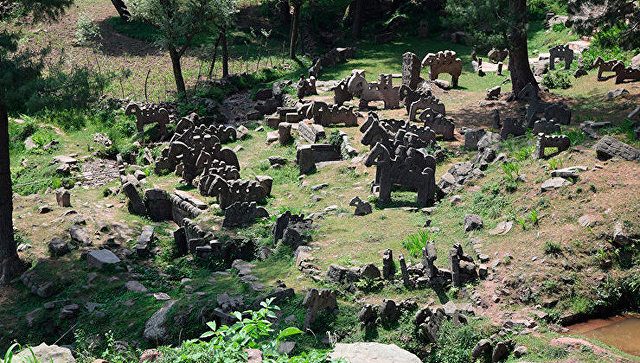 Other than that, Molodin says very little seems to be known about the two ritual complexes where the statues were found and nothing is known about the people who carved them.

"But what kind of population is this is a big problem, because there was nothing like it in the iconography in India before, it's some kind of population that suddenly appeared in the Himalayas, settled in hard-to-reach areas and left such a trace."

Natalia Poslomak will likely stay and search for more artifacts and potential remains – frozen or otherwise – since so many questions are unanswered. Who were the mysterious stone carvers? Why four people on one horse? What kind of culture would need to do that? What kind of horse would be strong enough and long enough in the early Middle Ages to do that? (Insert “Aliens!” exclamation here.)

Historians Claim to Have Found the Twin of the Great Sphinx