Humans Are Born With a Natural Fear of Spiders and Snakes

Gather up those people who incessantly ridicule you for your fears of spiders and snakes and get ready to say “I told you so!” A new study found that the human brain is preprogrammed to get nervous or worse around spiders and snakes, and that hard-wiring occurred millions of years ago when there was probably a good reason to to be afraid of them – they were big, bad and dangerous. OK, all together now: “I TOLD YOU SO!”

"When we showed pictures of a snake or a spider to the babies instead of a flower or a fish of the same size and color, they reacted with significantly bigger pupils."

Neuroscientist Stefanie Hoehl of the Max Planck Institute and the University of Vienna in Austria is one of the co-authors of the study published this week in Frontiers in Psychology. Its simple yet fascinating purpose was to determine if arachnophobia (fear of spiders) and ophidiophobia (fear of snakes) are learned from other humans or are traits we are born with. The researchers recruited 32 babies (around six months in age – too young to have learned fears of spiders or snakes) and their parents as volunteers. The babies sat comfortably and stresslessly on the laps of their parents for the test. 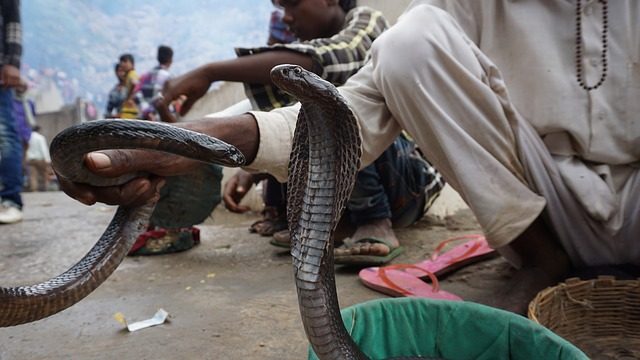 To measure fear, infrared eye trackers (scary, but not as much as spiders) were pointed at each baby’s face to measure pupil dilation, which is caused by changes in levels of norepinephrine, the brain chemical whose primary function is to activate the brain and body rapidly in response to stress or danger – the so-called flight-or-fight response. The parents wore blindfold so they wouldn’t influence the babies’ responses.

In one experiment, the babies were shows pictures of spiders and flowers. Their eyes dilated an average of 0.14 millimeters for the spiders and 0.03 millimeters for the flowers. When shown snakes and fish, the pupil dilations surprisingly showed no differences. The researchers then showed the babies snakes and flowers and saw an average pupil dilation of 0.29 mm for the snakes and 0.17 mm for the fish.

"We conclude that fear of snakes and spiders is of evolutionary origin. Similar to primates, mechanisms in our brains enable us to identify objects as 'spider’ or 'snake’ and to react to them very fast. This obviously inherited stress reaction in turn predisposes us to learn these animals as dangerous or disgusting.”

The researchers point out that this inherited automatic stress reaction gets stronger as it is reinforced by children seeing their parents or older siblings react in horror to spiders and snakes. What’s interesting is that other studies show that babies are not born with innate fears of truly dangerous animals like bears or big cats, so this imbedded arachnophobia and ophidiophobia must go back 40 to 60 million years ago when snakes and spiders were bigger dangers to humans. This means most fears – of big animals, fire, electricity, other people – must be taught.

This is such big news, it’s worth shouting again: