In Madagascar, dancing with corpses is actually an annual religious ritual known as “famadihana” (Didn’t she win Season 3 of American Idol?). Practiced by the Malagasy people, it means “turning of the bones” and involves taking remains from family crypts, rewrapping the bodies in fresh burial cloths and then honoring the dead by dancing with the corpses around the tomb to traditional music played by live musicians. It’s actually a recent practice for the Malagasy that resembles practices honoring the dead in other cultures and is based on the belief that a person doesn’t enter the afterlife until their body has decomposed completely.

However, this year’s famadihana may also be adding to the corpse total. According to the New Straits Times, a dramatic increase in what is already the worst outbreak of the plague (in this case, the pneumonic plague – a severe lung infection caused by the bacterium Yersinia pestis that some experts believe is harder to control that the bubonic plague) ever in Madagascar is being blamed on famadihana ceremonies which are held from July to October.

“If a person dies of pneumonic plague and is then interred in a tomb that is subsequently opened for a famadihana, the bacteria can still be transmitted and contaminate whoever handles the body.”

Madagascar’s Health Ministry chief of staff Willy Randriamarotia says the country has seen more than 1,100 cases of the plague since August, resulting in at least 124 deaths. In an attempt to combat its spread by famadihana, plague victims are required to be buried in unmarked unopenable crypts. 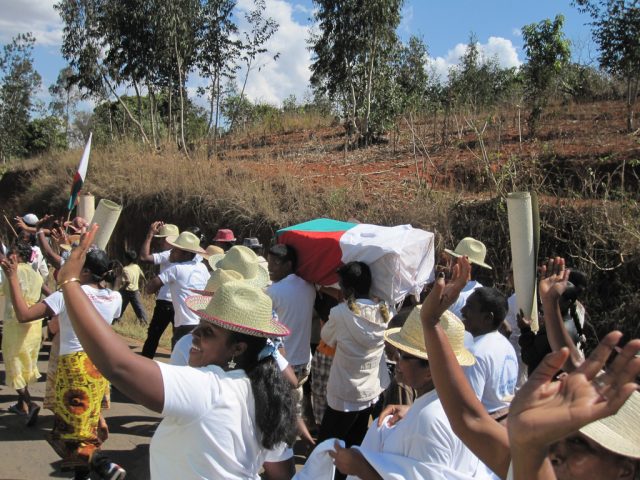 Needless to say, that hasn’t deterred grieving families. Helene Raveloharisoa was a participant again this year:

“I don’t want to imagine the dead like forgotten objects. They gave us life. I will always practice the turning of the bones of my ancestors – plague or no plague. The plague is a lie.”

“The government in power is short of money for the next presidential poll (in 2018), so they invent things to get cash from lenders. I have participated in at least 15 famadihana ceremonies in my life. And I’ve never caught the plague.”

She may have reason to be suspicious. While the United Nations has budgeted $9.5 million in plague aid, a local official claims only 26 percent of it has been received.

Is this a conspiracy based on the classic conflict between government and religion? Is it sacred, ironic or just plain foolish to risk death to honor the dead?

While pondering those questions, enjoy a selection from one of my favorite bands, Dead Can Dance.

A Catalog Of Lesser-Known Mysterious Apes