Dubai has an indoor ski resort, an artificial archipelago and the world's largest flower garden. It should come as no surprise that this cutting edge city in the United Arab Emirates also has cutting edge crime fighters with the latest in high-tech equipment – even though the crime rate for a city of its size is actually quite low. Nonetheless, it has to spend that oil and tourism money on something, so this week the Dubai Police unveiled their new criminal-chasing manned hoverbikes. They’re so cool, people may want to speed just to get pulled over (or hovered over) by one. 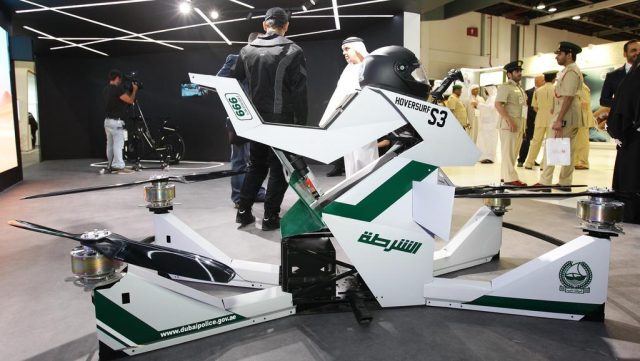 RT reports that the police hoverbikes were unveiled this week at the GITEX (Gulf Information Technology Exhibition) Technology Week held in Dubai. They're made by the Russian drone manufacturer Hoversurf and are based on the company’s Scorpion 1 single-seat aircraft platform. The electric-power craft has four propellers that can lift it to 5 meters (16 feet) in altitude while carrying an armed police officer weighing up to 300kg (662 lbs.) who can chase down getaway cars and speeders at up to 70 kph (43 mph) for 25 minutes on a full charge. (A gas-powered option will keep it aloft for up to an hour). That may not seem fast enough, but the hoverbike never gets stuck in traffic jams. It can also be operated remotely without a driver onboard.

Not surprisingly, the Hoversurf was designed for extreme sports enthusiasts and gets its name from its two modes – hovering motionless in place or surfing on waves of air. The website also shows its two-seat craft, drone taxi and cargo drone, but no information on pricing for these nor the Hoversurf in dollars, rubles or Arab Emirate Dirhams. Not that price matters to Dubai – the city earlier this year put Robocops on the streets, has expensive sports cars for police cars, and police representatives at the convention were reportedly also looking at electric smart motorcycles and self-driving police vehicles that can carry and release a drone for surveillance and pursuit. 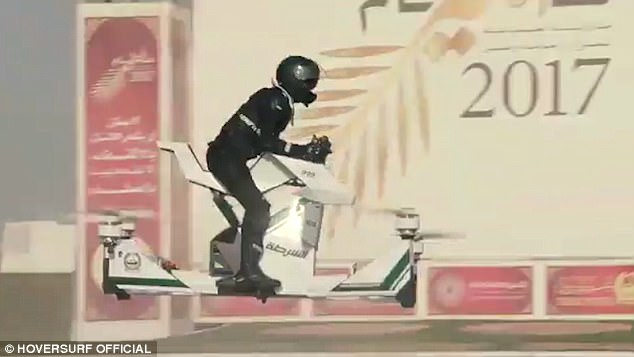 If Dubai can equip its police with hoverbikes, why can’t some rich American city? Nothing is stopping them but money. What about driverless police cars and autonomous drones? That would require getting past the powerful donut shop lobbyists. (You knew there would be a donut joke eventually.)