Encounter In The Desert – Reviewed

Available now is the new book from Kevin Randle. Its title: Encounter In The Desert. The subtitle: The Case For Alien Contact At Socorro. If you know your UFO history, you'll know exactly what the title of the book refers to. Namely, an incident that went down on April 24, 1964 and which, for many, has become a UFO classic. It was on the afternoon of the day in question that local police-officer Lonnie Zamora broke off from pursuing a teenager in a speeding car and headed to a nearby dynamite shack. The reason? A sudden roaring sound coming roughly from the area where the shack was positioned. Quite naturally, Zamora thought that there may have been an explosion at the site. He was wrong. What Zamora came across - many UFO researchers believe - was nothing less than a landed UFO, piloted by two smallish humanoids dressed in white. A close encounter? For many, yes. But not for all.

Those who are skeptical of the Socorro affair suggest that what came down may have been a vehicle of the military. Others suggest that an ingenious prank was the cause of all the fuss. The story was told extensively in Ray Stanford's 1976 book, Socorro "Saucer" In A Pentagon Pantry. Now, more than forty years after Stanford's book was published, we have Kevin Randle's take on Socorro. It's clear from very early on that Randle is of the opinion that what landed at - and soon took off from - Socorro was an alien spacecraft. To his credit, though, Randle tackles just about every theory under the Sun.

That something happened is not a matter for debate. Something clearly did. The big question is: what, exactly, happened? We know that the local police, the Air Force and the FBI all took a deep interest in the case. In part, surely, because the primary witness was a then-serving police officer. I say "primary" because, as Randle notes, there is evidence of other witnesses having seen something too.

Randle takes us on a real-life detective story as he seeks to uncover the truth of the weird event. We are treated to a good, solid study of the case, of the craft that Zamora encountered, and of the diminutive pilots. Randle also demonstrates that the Air Force's Project Blue Book undertook an in-depth investigation of the controversy. It was an investigation handled seriously and carefully by the USAF.

Personally, I have no firm conclusion regarding what happened on that April 24, 1964 day. And, having read Randle's book, I'm still not sure what to think of it. Yes, Randle does indeed make a good case that the claims of the craft being one of ours doesn't really hold water. He cites, for example, the words of Hector Quintanilla, who was in charge of the USAF's operation, Project Blue Book, at the time. Quintanilla followed a theory that perhaps what Zamora had seen had military origins. Randle refers to "...some special tests being conducted at White Sands involving a Lunar Surveyor and helicopters." While this looks promising - in terms of an answer - we learn that Quintanilla, having addressed this theory, came away "dejected" and convinced that "the answer to Zamora's experience" was not to be found in military experiments, after all. 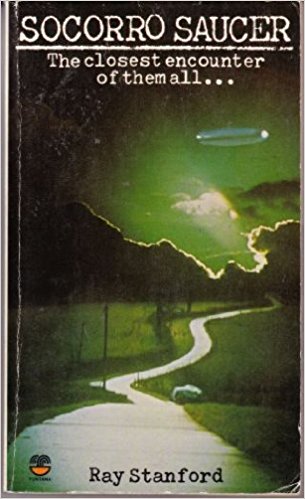 Randle also has a 17-page chapter on the hoax theory. Philip Klass - a real piece of work who I crossed swords with in the 1990s - crops up in this chapter, as one would expect. A definitive debunker - rather than an open-minded skeptic - Klass pursued various clues and data to try and make a case for a hoax. His conclusions were not particularly persuasive. Far more interesting, though, is a relatively recent claim which suggests the whole thing was concocted by a bunch of local students, and who had grievances against Zamora. Randle says: "Zamora harassed the students for seemingly no reason, and at every possible opportunity. Many of the college kids did not like him." This is a very intriguing chapter which, I suspect, will make some conclude that a hoax is indeed what it was. Randle offers his thoughts, however, as to why he disagrees with this scenario.

While Randle does make a good argument for something unknown having touched down, there is one thing that I found seriously distracting. The book runs to 284 pages, which is enough for a solid conclusion to be reached. But, here's the problem I have: There is a lot of material in the book which has zero to do with the Socorro case. For example, Randle notes carefully that beings - whether human or alien - were seen around the craft. So, as a result of this, we have an entire chapter (Chapter 6, titled "Other 'Unidentified' Occupant Sightings") on this aspect of Ufology. We're told of a landing with entities in Kansas in 1952, of an Oklahoma-based incident in 1966, and of one in Berlin, Germany in 1950. Of course, there is nothing wrong with noting this. But, a 12-page chapter, which has nothing to do with Socorro? Randle could have made his point - that there are good, other landing/occupant cases on record - in a couple of paragraphs. As I see it, this chapter comes across as filler, as padding, to make the book longer.

I felt exactly the same about Chapter 7, "Psychological Solutions." This chapter includes nothing less than a 10-page section on the 1952 "Flatwoods Monster" saga. It also includes a 13-page study of the famous Kelly-Hopkinsville, Kentucky "Goblin" incident of 1955. Combined, that's 23-pages. Yes, Randle makes valid points concerning various parallels to the Socorro incident. But, just as I said in the paragraph immediately above, this chapter too comes across as filler. Chapter 11 is 24-pages long and it deals with other landing cases. Yes, again, Randle makes connections between Socorro and these other landing-themed ones. But - also again - Randle could have made his point in a page or two. Or even less. The material I have issues with amounts to almost 60 pages of the book, and which really has very little to do with Socorro at all. It could all have been condensed and wrapped up in a few pages. Or combined into one chapter. The text of the book is 249 pages (minus the Bibliography, Index etc), so roughly a quarter of the book veers away from Socorro.

That said, I do recommend people read Randle's book, as it's high time that a new study of the Socorro case surfaced. And, now, it has. The padding aside, this is a good study of the April 1964 incident and will almost certainly provoke lively debates among ufologists.