Although generally a night of parties and laughter, Halloween has its dangerous side. The holiday began as the festival of Samhain during which ancient Celts would dress in costumes and light bonfires to ward off evil spirits. The Catholic Church incorporated the celebration into All Saints’ Day in the eighth century, and Americans later transformed it into a night to get drunk and eat lots of sugar. However, tragedy has struck on All Hallows’ Eve. From natural disasters, to fatal accidents, to the violent acts of serial killers, 31 October has left behind it a trail of death and destruction. Here are a few cases of Halloween turned deadly:

After delivering a lecture against spiritualism at McGill University in Montreal, famed stage magician and escape artist Harry Houdini invited a few students back to his dressing room. One student, Joselyn Gordon Whitehead, asked Houdini if it were true that he could not be hurt by punches to the stomach. Whitehead suddenly began striking Houdini’s abdomen even though the magician was relaxing on a couch and hadn’t had time to prepare himself for the attack. Houdini winced at the blows and held up a hand to stop Whitehead.

The blows did more than hurt Houdini, they ruptured the magician’s appendix. Houdini died of an infection caused by the rupture at 1:26 p.m. 31 October 1926, in Room 401 at Grace Hospital in Detroit. He was 52.

When Ronald Sisman, 39, and Elizabeth Platzman, 20, were found murdered in their New York apartment near Greenwich, police initially suspected the murder was drug related. Actress Melonie Haller had accused Sisman of trying to force her to take drugs in May 1980, although the case was soon dropped.

The bodies of Sisman and Platzman were found on Halloween “beaten severely and shot once in the back of their heads at close range,” per The New York Times. The apartment had been ransacked, “apparently by the killer or killers in a search for something.” Sisman and Platzman’s identification were missing.

Then things got weird.

Sisman ran two photography businesses out of that apartment, which may have also meant the break-in began as a simple robbery. However, a prison snitch leaked information that caused investigators to consider another possibility.

The informant had overheard a fellow inmate describe the crime weeks before it happened. The inmate was David Berkowitz, the Son of Sam killer. Police had arrested Berkowitz in 1977, charging him with several murders. Berkowitz confessed, claiming his neighbour Sam's dog, Harvey, was a demon who coerced him to kill.

Berkowitz told the informant he belonged to a satanic cult that planned to perform a ritual murder in a photographer’s apartment near Greenwich. Cult members were going to beat the couple living there, shoot them in the back of the head, then ransack the apartment. Berkowitz said the man who lived in the apartment had photographic evidence of one of the Son of Sam murders and cult members were afraid he would turn it over to the police to get out of a drug charge.

Although Berkowitz accurately described Sisman and Platzman’s apartment, there was not enough evidence to corroborate his claim. The murders of Sisman and Platzman are still unsolved. He is serving six consecutive life sentences.

Between January 1918 and December 1920, Spanish influenza infected more than 500 million people worldwide. The virus was so virulent it hit such faraway populations as those in the Arctic and on isolated Pacific islands. During those two years, it killed around 100 million people, which was close to five percent of the world’s population. Although influenza is usually only fatal to the young, old and people with a weakened immune system, the Spanish Flu was not selective. It also killed healthy adults.

However, the deadliest month in that time was October 1918 when 200,000 people died of the flu. After Halloween, this “death spike” was over. 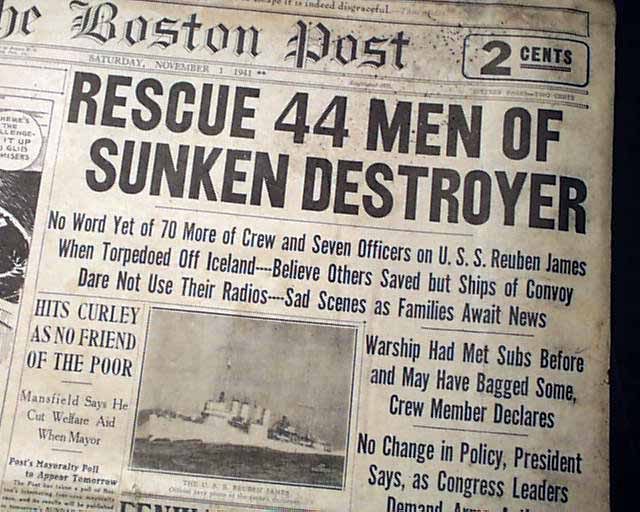 During the early years of World War II, before the United States entered the fray, the Navy destroyer USS Reuben James was one of the many ships assigned to guard the Atlantic coast of the United States. The ship was later reassigned to escort convoys to England from North America. The American ships escorted the convoys to Iceland where the British Royal Navy would take over.

It was in Iceland on Halloween night the Reuben James’ voyages ended.

While escorting Convoy HX-156 from Halifax, Nova Scotia, the Reuben James positioned itself between an ammunition ship in the convoy and the known location of German submarines. The submarine U-552 blew off the Reuben James’ bow, which immediately sank. The rest of the ship stayed afloat for five minutes before sinking. Out of 160 officers and men on board the destroyer, only 45 survived. 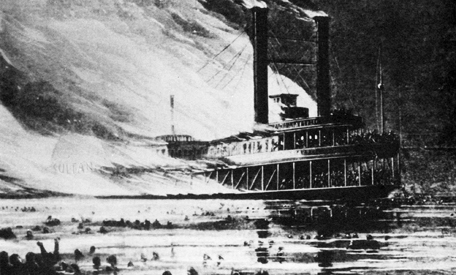 After United States forces defeated the Creek Indian Nation in the Creek Indian War of 1836, the government began moving the Indians westward from their homes in the states of Georgia and Alabama.

In 1937, three steamboats, the Monmouth, the Yazoo and the John Newton were hired to move the Creeks north and west. On 27 October, about 700 Creek were crowded aboard the Monmouth as the three steamboats began chugging their way up the Mississippi River.

On the night of Halloween, the steamboat Warren, pulling the sailboat Trenton, struck the Monmouth at Prophet Island Bend in Louisiana. Hundreds of Creek were thrown into the river. The Monmouth sank almost immediately. Nearly 400 Creek Indians drown in the muddy waters of the Mississippi River. It was the worst pre-Civil War disaster on the Mississippi.

When Benito Mussolini, the founder of Italian Fascism, was called to Rome by Italian King Victor Emmanuel III in 1922, he came on the heels of nearly 30,000 Fascist blackshirts. The blackshirts marched on the city demanding the resignation of Prime Minister Luigi Facta. Facta soon resigned, and the king appointed Mussolini prime minister. The day was Halloween.

It didn’t take long for the Italian strongman turn his office into a dictatorship, and when he pushed Italy into WWII, he chose to ally with Adolf Hitler. During the war, Mussolini was responsible for nearly half a million deaths, making him one of the most notorious mass murders in history.

1941: A smoker’s pipe put inside the pocket of a raincoat caught the H. Booth and Son clothing factory on fire, destroying the building and killing 49 people, mostly women and young girls, in Huddersfield, West Yorkshire.

1963: A leaky propane valve caused an explosion in the Indiana State Fairgrounds Coliseum during a “Holiday on Ice” skating program. The blast killed 74 people, and inured 400.

1984: The body guards of Indian Prime Minister Indira Gandhi assassinated her in her home in New Delhi.