“Magic Mirrors” of the Ancients: Were Telescopes Used in Ancient Times?

In the 1930s, a small glass cylinder of ancient provenance was discovered in Baghdad. Simple and of otherwise inconsequential design, the strange little object did convey a message: that in ancient times, and at least as early as 2,700 BC, artificial glass was being produced for various purposes.

Similar discoveries in the way of these mysterious ancient glassmakers turned up 12 miles from Haifa, Israel, within a large cave, when a bulldozer on site struck a large 6 by 10 foot glass slab, first believed by archaeologists on site to have been a large piece of vitreous stone. Upon closer examination, the slab was indeed found to be glass, as confirmed in 1964 by a group of American glass experts who visited the site.

While the early production of such materials is fascinating unto itself, at least in terms of the engineering skill it displays, there are more unusual allusions to glasswork that appear in history, which might suggest more technical use of glass in the creation of mirrors, lenses, and even sighting devices.

Among the most famous examples is the "famous" mirror attributed to Ptolemy Euergetes, under whose reign the item was purportedly placed in the Pharos lighthouse off the coast of Alexandria. In his aptly-titled 1860 book, Stories of Inventors and Discoveries in Science and the Useful Arts: A Book for Old and Young, the antiquarian John Timbs (who also used the name Horace Welby) wrote of this strange "mirror," described as being capable of sighting objects at great distance:

This mirror is stated by ancient authors to have represented accurately every thing which was transacted throughout all Egypt, both on water and on land. Some writers affirm that upon its surface an enemy's fleet could be seen at the distance of 600,000 paces; others say, more than 100 leagues! Albulfeda, in his description of Egypt, states this mirror to have been of “Chinese Iron” which Buffon considers to mean polished steel; but a writer in the Philosophical Magazine, 1805, supposes the metal to have been tutenag, a Chinese metallic compound, capable of receiving the highest polish. The existence of Ptolemy's mirror has, however, been generally treated aa a fiction; but Father Abbat, in his Amusemems Philosophiques, first published at Marseilles in 1763, considers that it may have been at the time the only mirror of its kind, and, being a great wonder, its effects may have been greatly exaggerated; making allowance for which, nothing remains “but that at some distance, provided nothing was interposed between the objects and the mirror, those objects were seen more distinctly than with the naked eye; and that with the mirror many objects were seen which, because of their distance, were imperceptible without it.”

"It is certain that, under some circumstances, objects may be seen at a much greater distance than is generally supposed," Timbs concluded. "Thus it is stated that the Isle of Man is clearly visible from the summit of Ben Lomond, in Scotland, or 120 miles distant. Brydone states, that from the summit of Etna mountains 200 miles off may be distinguished; and, during his visit to Tenerife in 1856, Mn Piazzi Smyth saw objects at a much greater distance." 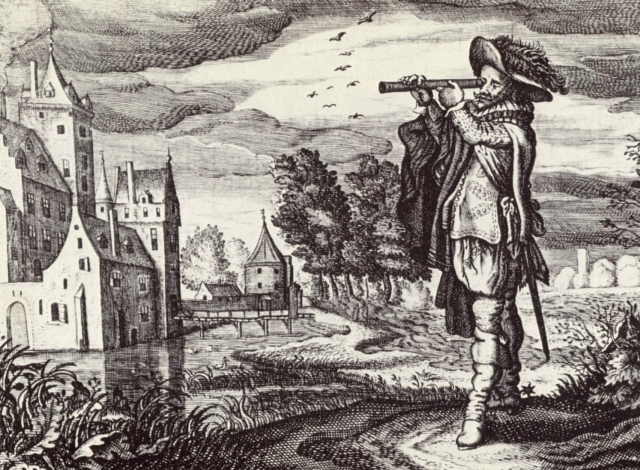 The implication here, of course, is that perspective may have had more to do with claims of sight over great distances with the use of this "mirror," rather than the unique qualities imbued by its formation in "Chinese Iron." The description of the device, and its attribution to metal obtained from the Orient, does bear a passing similarity to the "Chinese Magic Mirror," a device with the perceived capability of becoming transparent, and/or projecting designs when bright sunlight was cast upon it (more on these devices can be read about on page 16 of the PDF found here).

Strange though the description may seem, many scholars have noted its apparent similarity, at least in terms of its function, to modern telescopes. For some time, the creation of the telescope was credited to the 17th century astronomer Galileo. However, a patent for such a device was later found to have been filed in 1608 by the Flemish maker of eyeglasses, Hans Lippershey, at least one year before Galileo improved upon the design and built his own.

Centuries before this, it is known that the ancient Norse seafarers possessed lenses made of polished crystalline rock, which would have been of enough quality for use in a telescope; whether or not they actually created such devices remains unclear. However, claims of similar devices in antiquity have turned up elsewhere over the years, which include the Chinese Emperor Chan, who around 2283 BC was alleged have paired two magnifying lenses together, allowing him “to magnify planets." Pliny the Elder also wrote of Roman Emperor Nero employing some variety of magnifying device, which he used to observe the Colosseum games from a distance.

In 2016, The Royal Astronomical Society reported on the discovery of a series of megalithic tombs in Portugal, whose long, narrow entrances might have functioned as early sorts of telescopes, although sans any lenses. “These structures could therefore have been the first astronomical tools to support the watching of the skies, millennia before telescopes were invented,” the RAS reported.

If nothing else, such historical accounts lend some credence to the idea that telescopic devices may have been in use in some parts of the ancient world. Perhaps they were widely regarded as novelties at the time, and hence, we don't see anything akin to mass production related in the archaeological record today. And, when considered alongside items like the famous Antikythera mechanism, the notion that such "high technology" might have been implemented in some parts of the ancient world, at least on a small scale, really isn't that farfetched.

Even Galileo is said to have believed that people in ancient times discovered and used telescopes. Whether or not they were on par with the instruments he helped craft and improve, at least he could have been right that similar technologies had been used well in advance of his era of astronomical discovery.

Humans Are Born With a Natural Fear of Spiders and Snakes