If you were on a quest to find living mermaids in the U.S., the last place you might look would be in Minnesota. Sure, it has 10,000 lakes (actually 11,842, but there’s apparently no extra points for accuracy in state slogans) but they’re frozen or at least freezing most of the year and, while a Minnesota mermaid's tail may be muskie and able to survive Minnesota winters, her top is human and would likely prefer Miami. Yet a video making the rounds last week claims to show a mermaid being removed from a Minnesota lake by workers in hazmat suits. Will the state have to change its slogan to “Minnesota is For Mermaids”? “Swim Free or Die”?

Is there any chance this is an actual mermaid sighting? Let’s see what we have to work with. A video (link here) shows up on the Internet showing what appears to be two men in bright yellow hazardous material-handling suits. They walk down to the water on an unidentified beach on a body of water that appears to be used for recreational activities. They pull something out of the water that appears to be about the size of a human body and even looks like one … except for what seems to be a big blue fin at one end. The men put the thing on a tarp and look like they’re going to drag it back up the hill they came down. They don’t seem to be afraid of the thing – they don’t even wrap the tarp – and seem oblivious to the person recording them – a man with an Australian accent. Based on that, this is obviously a mermaid recovery. 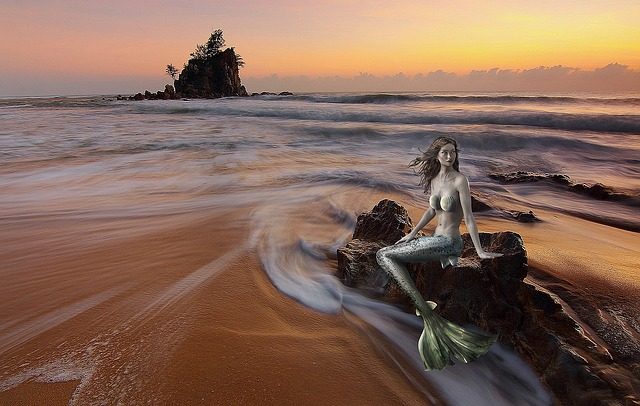 Just kidding. This video has more alarms than a chili shop. It was presented by a YouTube channel which has many questionable or seemingly fake videos. Maybe this is finally a real one? The video was first picked up by those infamous British tabloids. Well, everyone knows the mainstream media hides this kind of stuff from us, right? It’s broad daylight but the owners of the lake, nearby residents, tourists, swimmers, anglers, hikers, etc. are nowhere to be found. Wouldn’t the owners want to publicize this to maximize boat rentals and T-shirt sales? Why would they hide it? Is it a religious thing? For those who follow mermaid sightings, this looks suspiciously like one reported in Poland in 2015 that looked suspiciously like someone was shooting a movie or TV show. Is that what this was? Where was the rest of the crew?

Let’s say it’s not a mermaid but the scene is still real. What is it? If it’s a body, that makes it a crime scene and there should be police around. If these people were called in by a witness, where’s the witness? Why did they wear hazmat suits? What if it’s a giant dead fish? There’s something Minnesota lakes are known for – its record lake sturgeon weighed 94 pounds and was 5’10” (1.75 meters) in length. Are dead sturgeons hazardous materials?

How about a real fake mermaid? The Minnesota Mermaid LLC provides a live fake mermaid to liven up your pool parties and fish fries. The local news had no reports of any fake mermaid accidents. Publicity stunt? Is a fake dead mermaid really good for a fake live mermaid business?

This is why it’s so hard to report on news of any kind these days, let alone mermaid sightings. What do YOU think it is?

Real Witch Camps are Found in Ghana and Zambia