For the last few days, journalists and researchers around the world have been pouring over the files recently released at the website of the National Archives in Washington, which relate new details about the JFK assassination. Long kept from public view, these files--as many had hoped--do appear to offer some new details about one of the darkest days in American history.

Among these details, many had hoped that further information about a strange phone call made by Kennedy's assassin, Lee Harvey Oswald, would emerge. Instead, new details about an entirely separate call halfway across the world, which seemingly tipped off one news service about some "big news" that was about to occur in the United States... 25 minutes before Kennedy's assassination.

The call, according to one of the newly released documents at the National Archives, was received by a senior reporter at the East Anglia-based Cambridge News. It occurred at approximately 6:05 PM on November 22, 1963, London time, just 25 minutes before Kennedy was shot at the Dallas Motorcade in Texas.

According to the memorandum, penned by James Angleton of the CIA to then FBI director J. Edgar Hoover, “The caller said only that the Cambridge News reporter should call the American Embassy in London for some big news and then hung up.”

No further information was given which might indicate the identity of the caller in question, despite the chilling accuracy of the warning that was issued. Thus, it raises questions about who might have known about Oswald's plans in advance of the assassination, and to what degree they might have been involved.

“The important point is that the call was made,” Angleton wrote, “according to the MI-5 calculations, about 25 minutes before the President was shot. The Cambridge reported never received a call of this kind before and MI-5 state that he is known to them as a sound and loyal person with no security record.”

The memo goes on to say that, “MI-5 noted that similar anonymous phone calls of a strangely coincidental nature have been reviewed by persons in the U.K. over the past year, particularly in connection with the case of Dr. Ward," presumably in reference to osteopath Stephen Ward, one of the central figures in a British scandal occurring at the time known as the Profumo affair.

The late Michael Eddowes, a lawyer you investigated circumstances surrounding the assassination, became convinced that the secret informant that called Cambridge News had likely been Albert Osborne, a British-born Soviet agent. His reason for calling, Eddowes surmised, had been due to the fact that, "the Soviet Union was eager that the assassination should be seen as a conspiracy.” Eddowes also believed that Osborne may have befriended Lee Harvey Oswald, hence learning details of his plan to assassinate Kennedy.

This was not the only strange phone call that occurred on the day that Kennedy was assassinated. In fact, one of the strangest "loose threads" relating to the affair involves a phone call made by Lee Harvey Oswald that evening, while in custody and under supervision of law enforcement.

According to the Raleigh News and Observer, "In August 1977, the House Select Committee on Assassinations, created to do a new investigation, received information that Oswald allegedly tried to place a call from jail to a man named John Hurt in Raleigh, according to an internal report written by Surell Brady, a senior staff counsel to the committee."

When Oswald was allowed to make the call, two police officers were present in the room with him. Additionally, a call slip was produced as a record of the call, a copy of which had been kept by Alveeta Treon, the switchboard operator who had been working that night at Dallas City Hall. 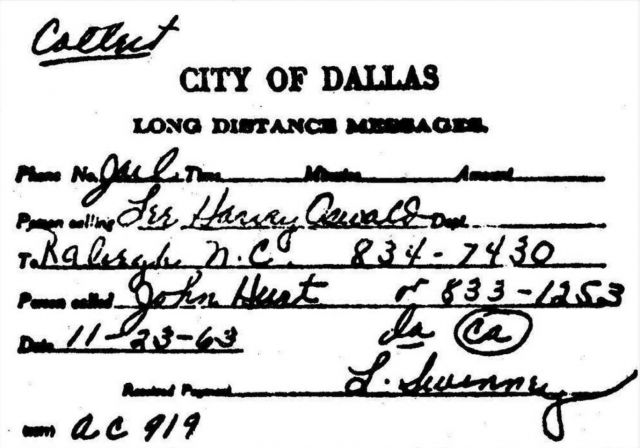 According to the News and Observer, “As Mrs. Treon watched, Mrs. Swinney did not place the call for Oswald. Instead [Swinney] opened the key on Oswald’s line and told him, ‘I am sorry the number doesn’t answer," this according to Surell Brady's report of the incident.

John Hurt, the man Oswald attempted to call, was a resident of Raleigh, North Carolina at the time, had formerly worked in U.S. Army counterintelligence. He had recently attempted to seek therapy at Duke University Hospital, but was turned away. His relationship with Oswald prior to the assassination remains unclear, and no details of this incident appeared before the House Select Committee on Assassinations.

Why two seemingly pertinent threads of information relating to JFK's assassination would remain undisclosed, and largely overlooked for so long is baffling indeed. In light of public knowledge of the Cambridge call, as well as the potential for new information about Oswald's cryptic call to Raleigh, one can only guess whether new clues about what happened that infamous day in Dallas will indeed emerge.