Viking Burial Clothing May Have Been Woven With Muslim Words

If you’re a fan of the Vikings, whether you think this is interesting news will most likely depend on WHY you’re a fan of the Vikings. Researchers at a Swedish university were reexamining clothing found at Viking burial sites in Sweden and found something they hadn't  noticed before that they described as “staggering” – it appears that letters woven in some of the fabrics spells out the word “Allah” in a reverse mirror image. Is it true? If so, what does this mean?

"I couldn't quite make sense of them and then I remembered where I had seen similar designs — in Spain, on Moorish textiles."

In an interview with the BBC, textile archaeology researcher Annika Larsson of Uppsala University says she and other researchers were studying garments from Viking burial sites in Birka and Gamla Uppsala when she noticed unusual geometric patterns made with silver and silk threads. The geometry of the designs reminded her of Arabic Kufic script she had seen in Moorish textiles, and that clue caused the name “Ali” (the fourth caliph of Islam) to be visible on the front, and “Allah” when the garments were observed from the back – giving the mirror-image similar to what you can see on the inside of a monogrammed shirt.

“Perhaps this was an attempt to write prayers so that they could be read from left to right, but with the Arabic characters they should have. That we so often maintain that Eastern objects in Viking Age graves could only be the result of plundering and eastward trade doesn’t hold up as an explanatory model because the inscriptions appear in typical Viking Age clothing that have their counterparts in preserved images of Valkyries.”

In an Uppsala University press release announcing her findings, Larsson theorized that the apparent assimilation of Islam was evidence of more than just plundering and trade because the garments were used only for the sacred act of burial. She thinks the mirror-image may have been from Viking weavers trying to copy an unfamiliar writing style.

As expected, the shouts and murmurs began as soon as the press release hit the Internet. Amir De Martino from the Islamic College in London found it unusual that Ali and Allah appeared to be on equal footage in the weaving and speculated that, if it wasn’t an error as Larsson suggests, the garments could have been influenced by an early fringe movement in Islam.

“(This) basically makes no sense in Arabic."

Stephennie Mulder, an associate professor of Islamic art and architecture at the University of Texas at Austin, had stronger words for Larsson’s interpretation of the characters on Twitter. In addition to pointing out that the text says something she thinks is gibberish, the textile itself is from the 10th century while square Arabic Kufic script would not be developed for another three centuries.

Annika Larsson is sticking to her interpretation and plans to look for more Arabic patterns in Viking clothing and non-textile artifacts. She has an answer for her critics:

"The negative reactions have come from xenophobes, without any exceptions. It's the Muslim connection that they find particularly disturbing."

Meanwhile, the controversy over connections between the Vikings and Arabic Muslims continues. Could they have been closer than mere trading partners? If it were proven to be true, will it be accepted? 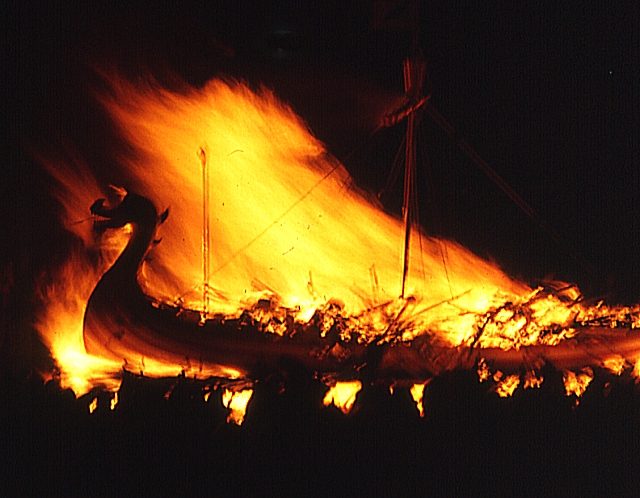