A Guide To The Abominable Snowman

Bigfoot is certainly the most famous of the world’s many and varied hairy man-beasts. Running a close second, however, is the Yeti, also known as the Abominable Snowman. The specific region in which the legendary beast is said to roam is the Himalayas, a vast, mountainous expanse that dominates Nepal, Tibet. In the same way that the United States appears to be the home of several distinctly different creatures – such as the huge, lumbering apes of the Pacific Northwest and the somewhat smaller skunk-apes of Florida – so there appears to be more than one kind of Yeti. Reportedly, they range from man-sized creatures to enormous giants. Of course, claims of such extreme and extraordinary heights must be treated cautiously. They may well be distorted accounts of encounters with animals of smaller stature, but no less impressive, perhaps around 12 to 13 feet tall.

There is another Bigfoot parallel, too. Native American tradition tells of ancient awareness of the hairy beasts of the United States. Likewise, tales of hair-covered giants roaming the Himalayas also extend back into the fog of time. Take, for example, the stories of the Lepcha people. They are among the oldest of the various tribes that inhabit Sikkim, situated in northeast India. Their presence, however, extends to Tibet – and specifically to the heart of Nepal. It’s not surprising, then, that they may have encountered Yetis during the course of their travels and expansions. Indeed, Lepcha lore tells of Goliath-sized, hairy humanoids that lived high on the Himalayas and that used rocks to kill their prey, such as goats.

It was in the 1800s that matters became particularly intriguing. In the early 1830s an expedition was launched to the Himalayas by a skilled mountain-climber, Brian Houghton Hodgson. According to Hodgson: “My shooters were once alarmed in the Kachár by the apparition of a ‘wild man,’ possibly an ourang, but I doubt their accuracy. They mistook the creature for a càcodemon or rakshas (demons), and fled from it instead of shooting it. It moved, they said, erectly: was covered with long dark hair, and had no tail.” None of the team expected to encounter giant, hair-covered hominids on the Himalayas, but that was exactly what they encountered. Particularly baffling to the team, the creatures they saw – typically at a distance – walked solely on its hind limbs.

Just one year before the turn of the 20th Century, Laurence Waddell’s book, Among the Himalayas, was published. In the book, Waddell described how a number of Tibetans had told him of huge, hairy, ape-like animals that moved like people and which lived in the mountains. Waddell put little faith in the accounts, despite having personally come across some intriguing, large footprints in the snow. The reports from Hodgson’s team, coupled with that of Waddell, provoked short waves of interest; it wasn’t, however, until the 1920s that matters heated up. 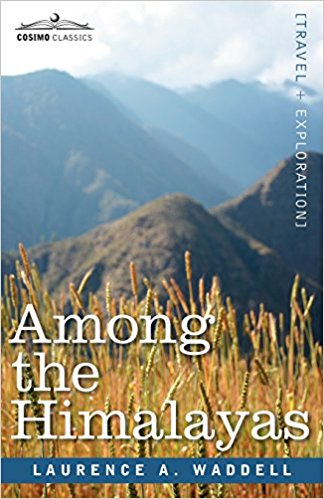 The Everest Reconnaissance Expedition was launched in 1921, under the leadership of Lieutenant-Colonel Charles Howard-Bury, of the British military. No-one on the expedition anticipated coming across anything unusual, but that was exactly what they found, in the form of huge, human-like footprints, thousands of feet up in the snow-covered mountains. When word of the strange discoveries began to spread, a newspaper reporter, Henry Newman, decided to look into the matter for himself. It didn’t take long, at all, before Newman had collated a respectably-sized body of material on the legendary mountain roamer, which he famously dubbed the Abominable Snowman – somewhat of a mistaken distortion of the term used by the locals, metoh, meaning “filthy.”

Without doubt, it was the decade of the 1950s that really caught the imagination of the media and the scientific community. Britain’s media was hot on the trail of the creature, as were respected mountaineers, including Sir Edmund Hilary and Eric Shipton. Although interest in, and reports of, the Yeti dipped in subsequent years, the controversy was revived in 2014, when a professor of genetics at Oxford University, England - Bryan Sykes - revealed his findings, which suggested the Yeti was actually nothing stranger than a bear, possibly one that was part-polar bear and part-brown bear.

For many researchers within the field of cryptozoology, the most likely candidate for the Yeti is Gigantopithecus, a truly gigantic ape that science tells us has been extinct for tens of thousands of years. That the immense beast roamed the very areas where Yetis are seen to this day suggests a distinct, but astounding, possibility that Gigantopithecus just might still be with us.

It May Be Time to Fear Swarms of Autonomous Slaughterbots