A bold project in Mexico has brought archaeologists, biologists, underwater photographers and cave divers to the Yucatán Peninsula to study the network of sinkholes known as cenotes that make up the Mayan Aquifer. These natural openings formed by the collapse of the underlying limestone bedrock led the ancient Mayans to what became their primary sources of water, since the peninsula has few lakes and rivers.

As a result, it’s no surprise that they were used for sacred ceremonies and sacrificial offerings and became starting points for the building of temples. A cenote was detected in 2015 underneath the El Castillo (The Castle) pyramid, also known as the Temple of Kukulkán at the Chichen Itzá archeological site using the round-penetrating electrical resistance survey technique. Those 3-D images and further underground exploration led the Great Mayan Aquifer (GAM) team to a never-before-seen blocked passageway from the Chichén Itzá ossuary (bone vault) to the Kukulkán temple … a passageway they believe was sealed by the ancient Mayans and has never been opened.

“We will enter again and, this time, we will try to open it to see if the passageway leads us to the entrance of the cenote beneath the Castle.” 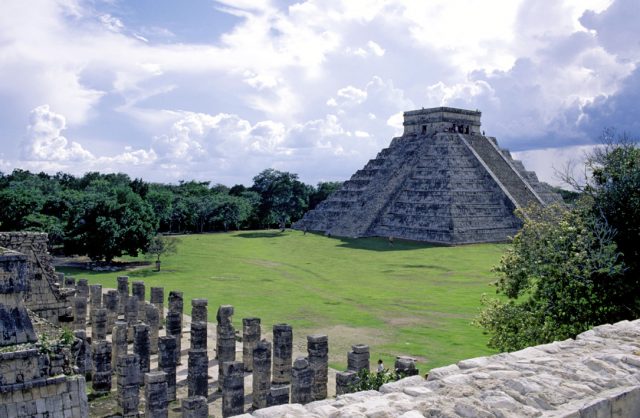 El Universal reports that team leader Guillermo de Anda is ready to break the seal and open the passageway to the temple’s cenote, despite the legends that these sinkholes were gateways to the underworld of the afterlife and the fact that these were places where human sacrifices were made to the rain god Chaac – the GAM team has already found hundreds of human bones in the Sacred Cenote (Well of Sacrifice) at Chichén Itzá.

The underworld of Chichén Itzá is not the only area that’s well-protected by both ancient seals and the government. A tourist recently got into trouble for shooting some fantastic photos of the pyramid using a drone without permission and outside normal hours. While some archeologists and protectors of the site would prefer to send a message by tossing the drone (but not the owner – they not barbarians) into the Sacred Cenote, he’ll probably end up getting a 10,227 pesos ($536) fine.

While the Great Mayan Aquifer team has all of the proper paperwork to break into the passageway to avoid a fine, will they find something far more painful or terrifying?

Unidentified Aircraft Incident Over Oregon Confirmed by FAA and NORAD