First Recorded Eclipse Sheds Light on Pharaohs and the Bible

It doesn’t take a rocket scientist, historian or astronomer to figure out that solar eclipses on Earth have been happening for as long as there’s been a Sun, an Earth and a Moon. The recent total eclipse in the U.S. shows just how excited, scared and sometimes wacky humans can be when they occur – spending money, traveling to strange lands, wearing odd headgear and holding celebrations. So it should come as no surprise that the discovery of the date of the first recorded solar eclipse coincides with a strange occurrence in the Old Testament and in Egyptian history.

The study, Solar eclipse of 1207 BCE, helps to date pharaohs, published in the journal Astronomy & Geophysics, shows how researchers Professor Sir Colin Humphreys from the University of Cambridge's Department of Materials Science & Metallurgy and Graeme Waddington began with a biblical event – Joshua leading the Israelites into Canaan – and paired it with a different interpretation of this passage:

“Sun, stand still at Gibeon, and Moon, in the Valley of Aijalon. And the Sun stood still, and the Moon stopped, until the nation took vengeance on their enemies.”

Using the original Hebrew text, they speculated that the reference to ‘stopping’ may not mean ‘moving’ (a miracle) but could be interpreted that the sun and moon stopped shining … an eclipse. In fact, the Hebrew word for ‘stand still’ has the same root as a word used by Babylonian astronomers to describe an eclipse. 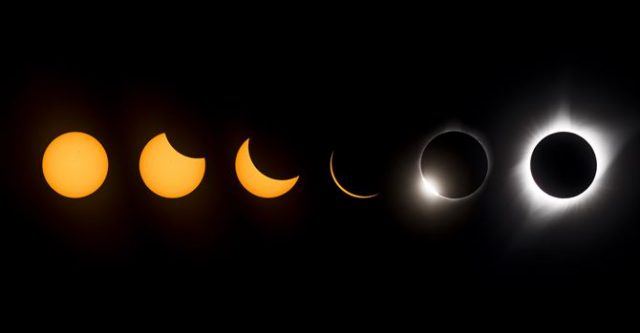 Moving from the biblical to the scientific, Humphreys and Waddington then developed what they called an “eclipse code” which used data on the Earth’s rotation (and periodic changes to it) to back-date all of the eclipses that could have been seen in the Canaan area. One in particular jumped out – 1207 BCE. That’s the only eclipse that would have been seen there between 1500 and 1050 BCE. Why those dates?

It’s time to bring in the Egyptologists and the Merneptah Stele. The script on this stone carving – also known as the Victory Stele of Merneptah or the Israel Stele (don’t say “Aha!” just yet) dates to the Egyptian king Merneptah who reigned from 1213 to 1203 BCE (not yet) – and describes Merneptah’s Defeat of the people of Israel in Canaan. Doing the math, that puts Joshua and the Israelites in Canaan somewhere around the time they could have seen the puzzling (to a people without special glasses and TV astronomers) eclipse. All together now … Aha!

Egyptologists have never been firm on the dates of Merneptah’s reign and that of his more famous father, Ramesses the Great. Using the ‘eclipse code’ of Humphreys and Waddington which factor in minor changes in planetary rotation, they can now more accurately put his reign at 1276–1210 BCE ±1 year, putting Merneptah at 1210 to 1200 BCE.

All of this makes the biblical book of Joshua the first known recording of an eclipse. Once again, an event described in the Old Testament stands up to historical scrutiny. If only Noah had stuck his head out to notice an eclipse when he docked his ark.

Monster Planet That Should Not Exist Discovered