Many people were disappointed when the presidential candidate who expressed interest in releasing classified UFO files did not get elected and the current Oval Office occupier showed no interest in doing it. That may change with the nomination of a federal judge who has been a paranormal investigator and popular horror novel author. Will he finally help us find out what Abraham Lincoln’s ghost is really thinking?

Brett J. Talley was nominated this week to the Montgomery (Alabama) Federal District Court and, while most of the mainstream media was focusing on the minor fact that he failed to disclose in his Senate Judiciary Committee questionnaire forms that he’s married to a White House lawyer, the Daily Beast reported the big news that Talley was a member of the Tuscaloosa Paranormal Research Group from 2009-2010. According to its website:

“Tuscaloosa Paranormal Research Group is a group of ethically minded people searching for the truth of the paranormal existence. We help those who may be living with paranormal activity that can be disruptive and/or traumatic. Our team uses a strictly scientific approach to determine the extent of the Paranormal Activity. Supporting evidence may be in the form of video, audio and/or photographs. We respect your privacy. We Do Not Charge for an Investigation. All services are free.” 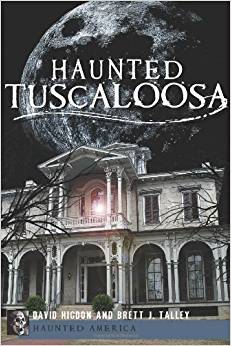 Wow. Not only was (and possibly still is) Talley a paranormal investigator, he supports using a “strictly scientific approach,” respects privacy and perform services for free. Where was this guy when his party was looking for a presidential nominee? If that part about doing things for free turned them off, his intro to Haunted Tuscaloosa, written with Tuscaloosa Paranormal Research Group founder David Higdon, would turn them back on:

"In the pages of this book, you will hear tales of haunted houses and shadows moving through university buildings. We will enter abandoned insane asylums, antebellum homes and ancient cemeteries. We will review stories of long-dead Civil War soldiers, of women driven insane by the death of loves and of some leading lights of Tuscaloosa who still walk in the massive homes they constructed."

They also co-authored Haunted Alabama Black Belt and Talley says his solo horror novels are inspired by H.P. Lovecraft. Besides paranormal investigations, novel writing and lawyering (he says that’s what puts food on the table), Talley was a speechwriter for Ohio’s Republican senator, Rob Portman. In a 2014 Washington Post interview about his work for Portman, Talley takes the reporter to the Holy Rood Cemetery in Washington DC where his motive was to find graves that seem interesting and ask questions out loud in case a spirit wants to answer.” He did and they didn’t.

Is the judicial nomination of paranormal researcher and horror novelist Brett Talley an indication that the White House is taking an interest in ghost hunting and other paranormal activities? Who knows? But it’s definitely a start.

Now if we could get someone looking for those UFO files.