Are there giant catfish swimming around in the depths of certain American lakes and rivers?

For years, stories have been in circulation that involve sightings of large fish, most popularly of the order Siluriformes (i.e. catfish, some of which also fall into the order Nematognathi). These fish, according to such stories, are said to be as large as automobiles, often drawing comparisons to Volkswagens for their shape and overall appearance.

Interestingly, the "giant catfish" theme is prevalent enough in American folklore that it even shares some elements with other popular urban legends, namely that of the classic "Lover's Lane" horrors, and the motif of an individual's hair turning white in response to such experiences. In his Encyclopedia of American Folklife, author Simon J. Bronner writes about this unusual comparison:

"Several popular American legends concern hair turning prematurely white as a result of experiencing some horror. A classic teenage parking legend is about the death of a boyfriend who is found hanging from a tree limb above the car after he leaves the girl alone to get gasoline. A common motif in the story is that the girl's hair turns white after seeing the boy. The same motif shows up in legends about divers who encounter a giant catfish or carp. The symbol of the absence of color—white—suggests being "scared to death," and conveys an association of whitening hair with aging, inferring a ghostly or lifeless appearance."

While categorized generally as urban legends, some of the stories have been presented as quite literal retellings of events, and in some cases, have been accompanied by photoshopped images that appear to detail such creatures (an example of a pretty badly doctored image, and the corresponding story of its alleged origins, can be found here, reposted from the now defunct www.catfishgumbo.blogs site). In some cases, strange spin-offs have also appeared, which alleged such things as the discovery of Nazi remains found in the stomach of a giant catfish.

I initially came across certain regional variations of the "monster catfish" story in relation to accounts from Lake Norman, near Charlotte, North Carolina (for more on this, see my earlier MU article, Not Quite Nessie: News Sites Claim a “Dinosaur” Lives in This North Carolina Lake). While a variety of "big fish" stories have been related about Lake Norman, they all bear remarkable similarity to the broader American mythos of the "monster catfish." 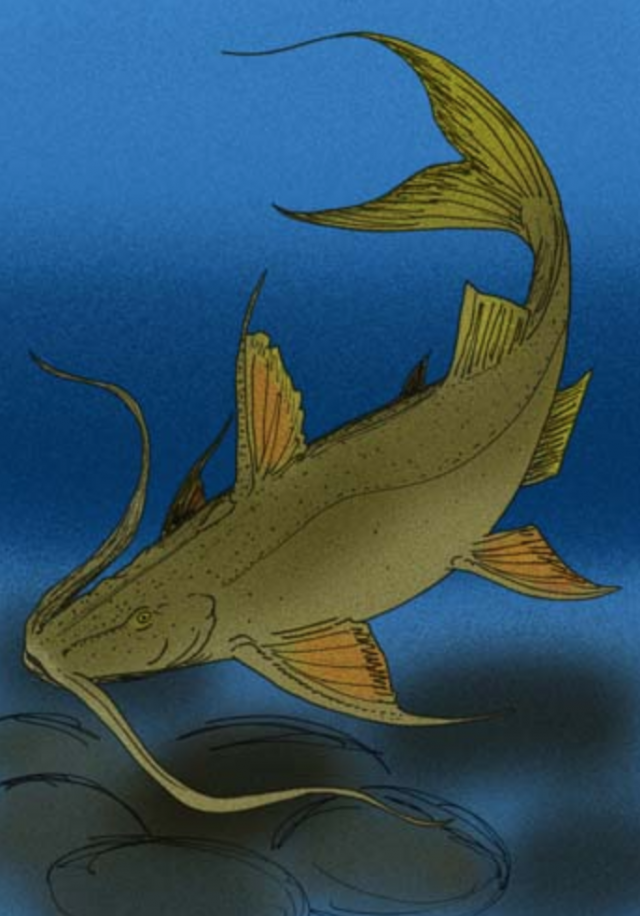 The general legend goes something like this, and is most often located near a dam or similar structure: a group of divers, often said to have been with the Army Corps of Engineers, descends into the depths as part of a routine repair operation. However, upon resurfacing, the excited divers tell of seeing giant catfish at the base of the dam, apparently "large enough to swallow a man." Some variations hold that the divers wisely refuse to reenter the the lake after this, and upon sending a second group down, the new batch of divers quickly returns with the same story. This results in a worker's strike, since the divers all refuse to complete the job, out of fear of the massive creatures.

Recently, a friend of mine named Dave Butler of Kennesaw, Georgia, wrote to me about a remarkably similar story associated with the Allatoona Dam near his community:

During the construction of this dam the Army Corps of Engineers has a team of underwater welders performing work on the base of the dam.  One day in the middle of a shift the team of divers surfaced in a panic.  The reported seeing a monster.  A monster in the form of a catfish.  A catfish they say that was big enough to swallow a man.  The team was ordered back to work but they refused and walked off the job.  A second team submerged and surfaced telling the same story as relayed by the first team of divers. With the underwater welding at a standstill construction on the dam could not continue.

Dave's story, while notably similar to existing accounts of "monster catfish," gets even more interesting at this point. In this variation of the story, one of the large fish was purportedly caught, and photographs of it were even taken with a small car backed up beside the creature's mouth for a size comparison:

This is where there is a gap in the story.  I don’t know who or how but someone caught that catfish.  To this day if you hike to the top of the Laurel Ridge Trail inside of the Coopers Furnace day use area you can visit a small museum and visitors center.  On display in this museum are examples of local wildlife, historical artifacts, and many different photographs documenting the construction of Allatoona Dam.  One of the photographs is a picture of a crowd of men standing around a giant catfish!  A catfish so huge that it had an automobile backed into its mouth, An MG midget to be precise... This area is close to my home and the next time I hike to the top I will snap you a photo and pass it along.

Admittedly, I would love to see this photograph, and if anyone out there may have a copy on hand, you're welcome to email me about it here. Worst case scenario, the location is question is just four hours away, so maybe it would be worth a trip down at some point.

Of course, the likely explanation here is that the story of the Allatoona Dam is merely one of the popular retellings of this existing urban legend, and that the photograph my friend Dave describes could have been doctored, like similar images appearing online. Then again, if indeed such an image exists, I would at least prefer to suspend judgement until I've seen it, rather than ruling things entirely out of hand.

Nonetheless, the similarity between the "monster catfish" stories from various locales is enough to raise red flags. A number of these stories from different places around the country (including the Allatoona Dam) can be read at this link to the Georgia Outdoor News forum. In particular, one account, shared by the user "boohoo222" offers a unique origin story for the giant catfish mythos:

"[T]hat story actually started at silver springs florida (sic). when looking through the glass bottom boats , catfish app. 40- 60 feet down , their size actually was magnified and they looked the size of small cars."

For years, glass-bottom boats were used at Silver Springs, Florida, so that tourists could observe various fish in the unusually clear waters at the location. In this case, the species of catfish that might have been seen was the armored catfish (Pterygoplicththys multiradiatus), a tropical variety of catfish that is considered an invasive species since its introduction in Florida and other areas. 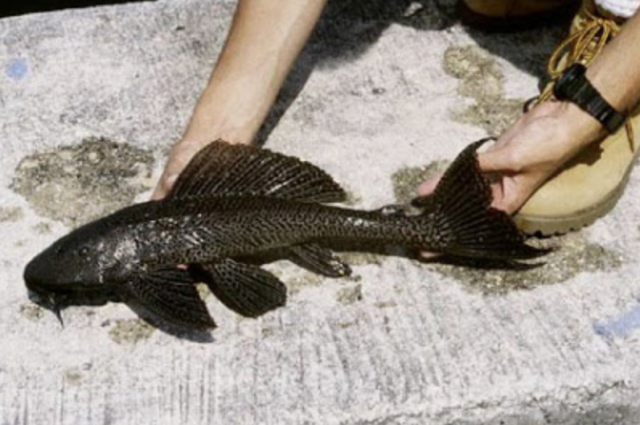 Whether this is indeed where the stories of giant "monster catfish" really began is anybody's guess. However, the consistency between the stories from various places across the U.S. obviously seems to show that the stories were borrowed from a common earlier source, and applied to the local legends of numerous other locales.

While entertaining, they do appear to have themes in common with other urban legends about American monsters: individuals who come upon something extraordinary, and even monstrous, under unexpected (and often fear inducing) circumstances... whether it be in a secluded forest, or a lonely lover's lane in the middle of the night... or as we see here, perhaps even the base of a dam in some deep, dark lake or river.

In lieu of all this, we'll have to resolve that these popular legends of monster catfish must remain the "big fish tales" that they are likely to be.