Mystery in the Far North: The Strange Case of the Missing Tourist

At some point in our lives we all seek some sort of adventure, perhaps some escape from our usual lives to shuck off our day to day identities and go off somewhere far away to do and experience new things. For some people who actually go through with this plan of escaping unfettered from the mundane they know, this is an enlightening experience, yet other have gone off to just keep on going to become unsolved mysteries. One such case is that of a brave Japanese woman who made a journey to a faraway land only to vanish and proceed to weave a web of strange mysteries and vault into the pantheon of great unsolved crimes.

On October 17, 2014, a 45-year-old psychiatrist from Japan by the name of Atsumi Yoshikubo found her way across the ocean to the cold, icy landscape of Yellowknife, in the Northwest Territories, Canada. The brave woman had booked the trip by herself through a tour company and come here to this remote, faraway world on her own, perhaps seeing it as the adventure of a lifetime and a chance to see the Northern Lights, as many Japanese tourists to the rugged region did.

Upon her arrival, Yoshikubo checked into the Explorer Hotel and spent the next few days visiting the gift shop and asking around about seeing the aurora borealis. During this time she was described as being friendly, cheerful, and in rather high spirits, despite the fact that she must have been somewhat disappointed about the fact that she had come in the off season for the aurora, and CCTV footage would later show that she was smiling and personable to everyone she met. Indeed, Atsumi seemed to be rather exhilarated to be there and although she tended to keep to herself nothing seemed particularly amiss at the time. She was just another of the many Japanese tourists passing through the scenic region looking to see the picturesque natural vistas and their ethereal northern lights.

On October 22, 2014, Yoshikubo was seen by a motorist walking near the side of a road on the outskirts of town, and the woman was described as being well dressed for winter, wearing a pink parka and carrying a camera as many tourists do, so nothing much was thought of it at the time. However, This would turn out to be the last time anyone saw Atsumi alive. The hotel realized that she was in fact missing when her checkout date came and went with no word from her. Two days later, when the room was checked, it was found to contain all of the missing woman’s luggage and belongings, including souvenirs she had bought for friends and family back home, all packed away and ready to go, as well as her passport, wallet, cash, and a return ticket back to Japan for a flight she turned out to have also missed.

A look at security camera footage showed her leaving the hotel but not returning, and since it seemed from the state of her room that she had planned to come back it was initially thought that he had gotten lost out in the wilds. An extensive land and air search was carried out by the Royal Canadian Mounted Police (RCMP), using thermal imaging equipment and tracker dogs as well, in addition to various local volunteers who launched their own excursions to look for the possibly lost tourist, but no sign of her was found. There was a sense of urgency at this time, because Yoshikubo would have been completely unfamiliar with the vast stretches of taiga covering the area, and the area’s famously harsh winter was inexorably approaching, yet despite covering large expanses of the terrain she could not be found.

At the time the mysterious disappearance generated a huge amount of media coverage in both the United States and Japan, and was seen to be rather baffling as Yellowknife was a safe, pretty tight-knit community that looked after and took good care of its tourists, and it was highly unusual that one should go missing. Indeed, out of all of the numerous Japanese tourists who came pouring through Yellowknife every year Yoshikubo was the first to ever vanish like that. Besides domestic reporters, Japanese journalists came to the area in droves until it seemed that the area was virtually crawling with news reporters, all clamoring about trying to find out what in the world was going on.

In addition to all of the Japanese reporters flowing into the area were Japanese law enforcement personnel, who helped with the investigation and offered insights into Yoshikubo’s past, and they increasingly suspected that she had probably intentionally vanished or committed suicide. It turned out that she had been estranged from her family for years, and it was considered unusual that she would come all the way to Yellowknife on her own and keep to herself when the vast majority of Japanese tourists come as groups or stick together. It was also reported that Yoshikubo’s brother had been told by Japan’s Ministry of Foreign Affairs that she had left a note to a friend that held hints that she was perhaps suicidal, although this has not been confirmed and he was given no further details as to the nature of the note or what exactly it said. Another alleged red flag for authorities was that Yoshikubo came during Yellowknife’s off season, when the aurora would have been faint or obscured by clouds, if visible at all, and that she would have surely known this before booking her expensive travels. Indeed, at that time of year Japanese tourists were extremely rare.

Despite the rather flimsy evidence, after 9 days of pursuing the case investigators announced that they had come to the conclusion that they believed that Yoshikubo had come to Canada with the premeditated plan to disappear off the face of the earth, and that she had even taken measures to conceal her intentions and movements, although no further details about this were forthcoming. The opaqueness of these official statements and the lack of strong reasons for reaching this grim conclusion raised some eyebrows at the time, especially considering all of the evidence that showed that, to the contrary, she seemed to have fully planned to go back home. Why else would she have bought a return ticket to Japan and then bought souvenirs and packed her bag at the hotel? Her estranged family also doubted that she was suicidal in nature, and even if she was why go all the way to Canada to do it? None of it made any sense.

Conspiracy theories began to swirl around the mysterious case, with ideas thrown around that she had been the victim of a serial killer or come across some other sort of foul play and that the authorities were trying to cover it up for some reason. This idea of a cover-up was exacerbated by the fact that the RCMP and Japanese were unusually tight-lipped and evasive about the details of the case and people felt like they were not getting the whole picture. To their credit, authorities searched the wilderness for Yoshikubo for a further 10 months, ultimately to no avail, and it was thought that with every passing day her chances of being alive dropped dramatically until searchers were expecting to find a frozen corpse rather than a living person. Without a body it was hard to know just what was going on, what had happened to her, or who to believe, and the case of Atsumi Yoshikubo became one of the biggest unsolved mysteries to ever hit Canada or Japan.

On August 31, 2015, a major breakthrough would come on the steadily cooling case when a hiker came across some discarded woman’s belongings and some bone fragments scattered about in a remote area to the north of Yellowknife. Upon being tested and analyzed for months the remains and belongings were discovered to be those of the missing woman, finally answering the question of whether she was still alive or dead but answering little else. The remains, what few there were, were just pieces of bone, and so badly damaged by the elements and the work of scavengers that it was impossible to tell the cause of death or how they had ended up there.

It was unknown if she had died in that spot or had been dragged there by an animal or dumped there by a killer. She could have walked out there by herself and died of exposure, been attacked by a wild animal, or murdered. She could have been killed by Bigfoot for all anyone knew, and the scant remains and their location did little to bring any answers. Incredibly, even with this grim discovery authorities have not been particularly forthcoming with new information, which some have seen as suspicious. 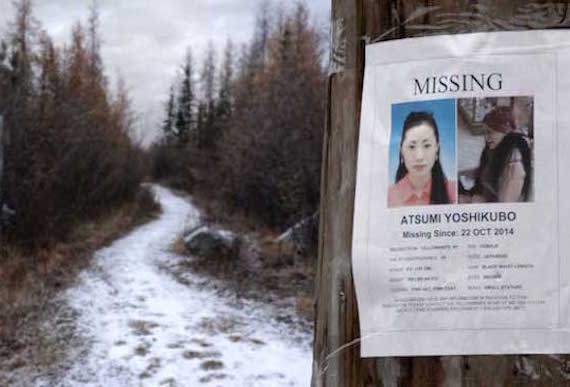 The case of Atsumi Yoshikubo, while officially closed with the finding of the remains, still continues to baffle. No one really knows why she came to Yellowknife alone or what happened to her after that. No one knows why she went out on that walk and or why she did not return. No one has been able to track down the mysterious note that she supposedly wrote to her friend before leaving. It is unknown whether she simply got lost, killed herself as was originally presumed, or was the victim of an animal attack, foul play, or whatever.

Although the details have been murky, one CBS documentary directed by Geoff Morrison and titled The Missing Tourist has gone into great depth trying to uncover the whole story from beginning to end, including interviews with family members, friends, and colleagues of Yoshikubo, as well as Japanese police on the case and residents of Yellowknife who were there at the time, but although the film provides an incredible amount of detailed information and insight it often runs into frustrating dead ends and even it is not able to solve the shadowy mystery once and for all, only managing to scratch the surface somewhat and put a human face on the whole sensational case. For now, the strange case of Atsumi Yoshikubo retains its cloud of mystery, and we may never know just what exactly happened to her in that cold land far from home.