Some Speculations that Interstellar Asteroid was a Spaceship

“I will never say this lightly, but we are, swear to God, actually discussing with some seriousness right now what are the odds that this was actually a spaceship. Which I 100% assure you has never happened before in my memory with seriousness.”

Well, that didn’t take long. Shortly after the announcement that the interstellar object, now named ‘Oumuamua, which visited our solar system last month was oddly cylindrical in shape, speculation arose on reddit and other places that it could have actually been a spaceship, possibly one traveling for millions of years and not necessarily occupied anymore. The above comment was from a reddit commentator Andromeda321 who was identified as an astronomer and it stimulated many interesting and well-thought-out comments on the possibility, as well as more than a few expressing incredulity.

Also on reddit, Eyusmaximus brings up the possibility that “An interstellar ship could maybe possibly be using an Alcubierre drive” (a theoretical faster-than-light idea using negative mass) and others speculated that its shape resembles a booster drive discarded after usage.

Over at Science Fiction & Fantasy Stack Exchange, someone compared the shape and spinning of ‘Oumuamua to that of Rama, the spaceship in Arthur C. Clarke’s sci-fi novel, Rendezvous with Rama, which was 50 km long by 16 km wide (31 by 10 miles – much bigger that the 400 meter long ‘Oumuamua) which had a 0.25 rpm spin to provide artificial gravity. 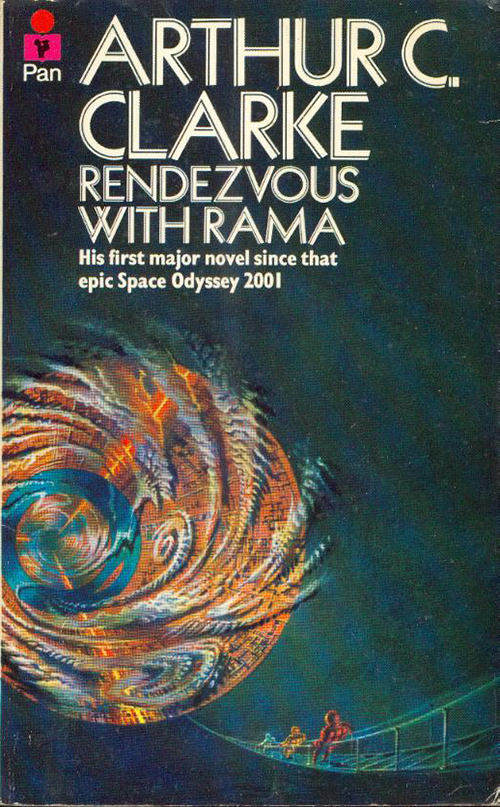 On Twitter at #Oumuamua, AndersonatAberdeen‏ (@AndersAberdeen) said “#Oumuamua rather reminds me of the probe from Star Trek IV The Voyage Home.” That’s the whale probe, which had a similar shape.

An interesting comment by A.C. Charania (@ac_charania) refers to a paper he wrote in 2008 called “Dyson Asteroid Shells: Hollow Worlds from the Outside-In” which proposes creating “a human asteroid habitat” by “enclosing a small body such as an asteroid (potentially focused on rubble pile compositions) in a rigid or semi-rigid shell” he calls a “Dyson Asteroid Shell.” His drawings suggest a cylindrical shape might be better for space travel. Did some alien civilization beat him to it? Is this more plausible than Tabby's star and the Dyson sphere?

Unfortunately, our measly Earth rockets couldn’t catch up to ‘Oumuamua to do a landing, intercept or visual inspection. In fact, the main  ‘visual’ we have of it so far is an artist’s rendition which makes it look like a long pointed rock. A conspiracy theorist might wonder if it was intentionally drawn that way to hide its real identity from the public.

Will we ever know if ‘Oumuamua was a spaceship? Probably not. Our best bet, now that we know these oddly-shaped intergalactic asteroids exist, is to watch for more and get better pictures instead of relying on drawings. And, while 'weird space rock' is still leading in the polls, it's always nice to have an opportunity to bring up Arthur C. Clarke and his fascinating and prescient novels.

While we wait, what do YOU think ‘Oumuamua is?