The Bizarre Mystery of the Unidentified Human Head from Nowhere

There have been many mysterious people who have turned up dead whose identities have remained concealed in the shadows from us even in this modern age of cutting edge forensic science. Most often at least we have a whole body to go on, even if this sometimes provides us with no real clues of who these people were, but on occasion there are presented for our bafflement merely anomalous body parts disembodied from their hosts and which leave us further scratching our heads. I have recently covered this topic here at Mysterious Universe, but there is yet another case that I have come across which is every bit as creepy and wreathed in mystery; that of an enigmatic human head whose identity has remained elusive.

In December of 2014 a grim discovery was made in the middle of a field in Economy, Pennsylvania, which lies about 30 miles from Pittsburgh, and just about a dozen yards off a rarely traveled rural road called Mason Road. The person who stumbled upon it, a middle school student, had been walking through the field when he spied what he at first thought to be deer guts but which would prove to be something much more startling indeed. There lying in the grass was a severed human head staring up at nothing, and the terrified young man promptly ran home to contact authorities.

Police enacted an intensive search of the area using aircraft and tracker dogs, yet no other signs of the rest of the body or who had dropped the head off could be located. A look at the mysterious head showed that it was that of a woman who appeared to be perhaps in her 50s or 60s, and which seemed to be remarkably smooth and fresh for having been sitting out in the wilds as it had been. This was mostly due to the fact that it had been embalmed, and it had all of its teeth as well as silver hair that had rather creepily been styled and set either before or after death. The cut that had removed the head from the body seemed to be precise and professional, with the careful removal of a piece of the cervical spine, indicating that whoever had removed it had known what they were doing. All of this led police to at first suspect that this was a lost part from some medical school, a piece of a cadaver, or a case of grave robbing, but no one really knew.

A quest to identify the dead woman through dental records turned up nothing, and when sketches and clay sculptures of what she must have looked like in life were released there were several tips and leads that ultimately went nowhere. Since the head was professionally embalmed it was suspected that the woman had originated from a funeral home or mortuary, yet none in the area reported having any missing corpses, and neither were there any desecrations of local graves. The cause of the woman’s death, the reason why just her head had ended up out in that field, and who she even was were all seemingly impenetrable mysteries.

An official autopsy would uncover more strangeness and mysteries to add to everything else, when the fact that someone had bothered to embalm it was already strange enough. The woman was found to have had extensive, almost obsessive dental work done, and there were signs that she had received medication for a heart ailment, specifically the trace amounts of Lidocaine and Atropine. It was even speculated that she may have originally died of heart disease, and there were signs that she may have received CPR, but this is totally unknown.

There were also found to be eye caps inserted under the lids, which are a tool used by morticians to keep a cadaver’s eyes open, in each of her eyes, and weirder still there were discovered to be small red rubber balls under these set within empty eye sockets where her actual eyes should have been. This was completely baffling, as there was no discernible reason for why anyone should want to replace eyeballs with rubber balls. It was thought that the eyes had been perhaps removed to be given as donor organs to an “eye bank,” but these typically only require the removal of the corneas, not the entire eyeball, and it certainly is not common procedure to stuff red rubber balls in there. It would be more common to perhaps put cotton in there, which is cheaper, so why the rubber balls? Why would anyone do this? No one knew. Kevin Moran, an embalming instructor at the American Academy McAllister Institute of Funeral Service in New York said of this oddity:

In my 40 years of doing this, I have never seen that. The use of caps in Jane Doe’s eye sockets was very professional. And yet part of it is the rubber balls you get with a ball-and-jacks set. It doesn’t make sense. 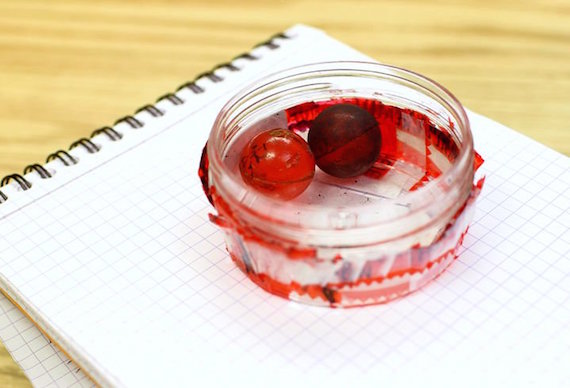 A look at the cut that had actually removed the entire head showed some interesting clues as well. Although the outer skin seemed quite rough and ragged, the inner tissue had been cleanly severed in a professional way, and someone had gone through the trouble of removing the spine. It was meticulously deliberate and careful, and this, plus the embalming, the state of the eyes, and the fact that absolutely no medical school, mortuary, graveyard, or organ donation organization had reported a missing body or body part, led authorities to suspect that this poor woman had been a victim of the illegal black market body parts trade, which sadly is rampant. The eyes might have been sold whole to a medical school or research facility, and the professional quality state of the decapitating cut also gave hints that it was perhaps done for this purpose, with an anatomy professor and forensic artist who was called in on the case named Michelle Vitali saying:

When we lifted the flap at the back of the neck, we could see that the whole purpose of that was to access the key joint that would preserve both the head and the vertebral column, thereby maximizing the profitability of both. This is not anybody going with a kitchen knife or anything remotely like that. It was well done, and it was placed perfectly. She was dismembered professionally. It’s part of the body parts trade.

On this tip, investigators then went about trying to actually purchase a human head on the black market, which they suspected might give them clues as to whether this is what had become of the mystery woman, such as whether the cuts and condition of the head were the same, but police eventually abandoned this macabre idea. A Reuters reporter by the name of Brian Grow then launched his own investigation into this matter and located a body parts broker that claimed to sell human heads for $300 a pop, which Grow bought two of. The cuts made on all of the heads were then compared with photos of the mystery head, and it was found that they were remarkably similar, practically identical, further supporting the dark theory that this Jane Doe had been butchered for the body parts trade, although considering the embalmed state of the head it was thought that she hadn’t been murdered to do so, with her corpse probably stolen post mortem.

Of course there have been investigations into the chance that she may very well have been murdered, but a detailed review of missing persons reports from 14 states turned up no viable match, and there were no bodies that had turned up without a head. In the meantime, all forensic efforts to track down just who the woman was have hit dead ends. DNA testing has proven to be fairly useless, as the embalming process did great damage to such evidence, and the little usable DNA that could be gleaned from the head has not matched with anyone in any database. Analysis of the woman’s dental work and efforts to find out her identity that way have also met with failure, even though considering the considerable amount of work she had had done it should be relatively easy to get at least some clues from this. Nothing.

Pleas to medical institutions and official body brokers (yes, this is a thing) didn’t get very far either, as there is actually a disturbing number of human cadavers that have been donated to science, where they end up in medical schools, research facilities, and even in NASA, crash test or military simulations, and these bodies and body parts are regularly donated and sold or leased all over the country with shocking ease and little in the way of tracking them. The sheer number of these corpses and the lack of much effort made to mark or identify them make it well nigh impossible to trace the woman’s identity that way. One frustrated Andrew Gall, chief of detectives for the Beaver County district attorney’s office, lamented in 2016:

Two and half years plugging away at this thing. Got nowhere. It drives me crazy. I’ve been doing this job for a long time. I hadn’t had anything where I had a body part like this turn up.

The case of the mysterious unidentified head has been widely discussed and debated by both police investigators and amateur sleuths, and an interesting podcast talking about the case can be heard here, yet it all remains unsolved. No one knows who this woman was, how she died, who cut her head off or why, or why that head should end up abandoned in some random rural field. It is also unknown why the head was embalmed or just what the meaning is behind those weird red rubber balls that had replaced her eyes. It is sad because somewhere out there this mystery woman had friends and family, people who cared for her and who may not even realize that the head of their loved one was found decapitated and forgotten in a field somewhere, and her final resting place is beneath a headstone that reads "Jane Doe." It is a tragic ending to be forgotten and nameless after such a full life, one's fate and history unknown. Hopefully at some point the mystery of this woman's head and identity will be solved but for now it remains a conundrum that taunts and beckons.

Interstellar Object Named but Shape and Source Still a Mystery