When A Dragon Isn’t Really A Dragon

In 1916, explorer Irwin J. O'Malley told a fascinating story of his discovery of the fossilized remains of a massive animal in China. That the creature was never formally identified has led to rumors that what O'Malley came upon were the remains of nothing less than an example of a Chinese dragon - as in a real one! Such is the lure of old tales driven by folklore, mythology, and legend. Nevertheless, his story is a very interesting one, even though it obviously takes us away from the realm of mythical monsters. O'Malley wrote:

“During the latter part of a holiday trip to the Yangtze Gorges undertaken by my wife and self in November, 1915, we met Mr. M. Hewlett, British Consul at Ichang, and his wife, and in their company spent a day in the Ichang Gorge, landing at various points to climb the cliffs and explore some of the numerous caves. While exploring a large cave on the right of the bank of the river, and about one mile above the Customs Station at Ping Shon Pa, we discovered the fossils about to be described. The cave is reputed by the Chinese to extend some twenty miles to a point near Ichang.

“It is reported that a party from H.M.S. Snipe spent three days in the cave some years ago and that they failed to reach the end. Evidence that the party penetrated beyond the point where the discovery was made exists in the name of their ship painted on the cave walls at a point considerably further in.

“The Chinese name of the cave is Shen K’an Tzu, which means ‘The Holy Shrine,’ and one of the characters forming the word K’an is the Chinese character for dragon.’ A large rock is seen at the entrance, and some eight to ten yards behind this there is a peculiar piece of curved rock bearing some slight resemblance to a portion of a dragon’s body; the resemblance is possibly suggestive enough to impress the Chinese mind, but altogether fails to impress the foreigner. 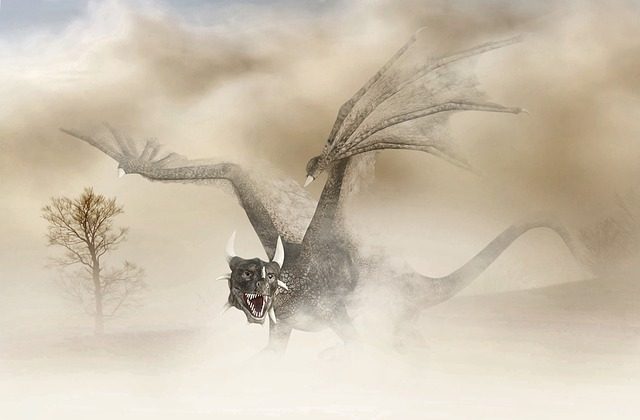 “After proceeding some hundreds of yards inside the cave we found ourselves walking on a peculiar ridge in order to avoid the surrounding pool of water. The ridge curved backward and forward across the width of the cave like the curves of a large serpent, the suggestion being so strong we lowered our lamps in order to examine the ridge more closely. To our astonishment and delight, we found that we were in very truth walking along a perfect fossil of some huge reptile. Further inspection revealed the presence of six or eight of these enormous monsters. Having taken a few small specimens of loose portions of scale for examination in a better light, we left, to return the following morning for the purpose of measurement.

“On our return the following morning we selected one of the largest fossils lying for a great part of its length isolated from the others, the coils of the remainder being rather entangled. The isolated portion measured seventy feet, so that is absolutely certain that the length is at least seventy feet, and as far as we could ascertain, this same specimen extended for another sixty or seventy feet. However, I admit that error is possible here, owing to the interlacing coils of the reptiles. The depth of the body seen in the foreground is two feet. The head is partially buried in the cave wall and appears to be a large, flat head similar to that of Morosaurus comperi.

“About twelve or fourteen feet from the head two legs are seen partially uncovered, and again to more about fifty feet from the head. The fact that several persons have penetrated this cave in former years beyond the point where the discovery was made seems to indicate the fossils have been but recently uncovered; by a heavy discharge of water through the cave. It seems probable that these reptiles were trapped by some volcanic disturbance and starved to death; the size of the bodies compared to their length would indicate this.

“A point of peculiar interest is the resemblance to the Chinese dragon of these fossils. I believe that it has therefore been supposed that the Chinese borrowed their idea of the dragons from Western mythology. The discovery has created a great stir among the local Chinese and foreigners, who are daily flocking to view the fossils. I am attempting to interest the Chinese authorities in Pekin and also the Chinese Monuments Society in order that the specimens may be preserved from damage.”

Richard Freeman - Cryptozoologist and former keeper at England's Twycross Zoo - has suggested that what O’Malley really examined were the fossilized remains of a huge sauropod named Mamenchisaurus. In all probability Freeman is correct.

The Hair-Braiding Bigfoot and More!