A couple of nights ago, I watched a recently made movie, The Rendezvous. It's an entertaining adventure-comedy production which comes across like a slightly darker version of Raiders of the Lost Ark mixed in with a bit of Romancing the Stone - and set in the "Age of Terror." The movie stars Stana Katic, whose character Rachel - an American-Jewish doctor - is central to the story that unfolds, and Raza Jaffrey as Jake (an American Muslim who works for the U.S. Government's Department of State).

Jake has the job of informing Rachel that her brother - David - has been killed. And, although she has not seen her brother for a number of years, Rachel is understandably devastated. We quickly learn that David was somewhat of an Indiana Jones-type, fascinated by ancient artifacts and treasure hunting. In pursuit of the truth of how David came to die, Rachel and Jake are soon airborne for Jordan and its ancient city of Petra.

As the story develops, however, and as conspiracy-theorizing, mystery and distrust start to take a hold of Rachel, she begins to suspect that Jake is more than he appears to be. Maybe he's not just someone who is out to help Rachel find the truth surrounding her brother's death. It turns out that Rachel is right on target. Jake has a hidden, secret agenda. It's an agenda run by secret elements of the U.S. Government. It all revolves around the fact that David had discovered a hitherto unknown Dead Sea Scroll.

A crazy bunch of fanatics - the Armageddonites - are determined to get their hands on the scroll, believing that possession of it will hasten their plans to bring to an end none other than us, the human race. So, we see our heroes on a mission to solve David's death, to get their hands on the scroll before the Armageddonites can, and to save us all. In the process, we are treated to a lot of witty banter, car chases, dangerous assassins, bullets flying here, there and everywhere, and much more. It's a fun movie that I recommend. But, there's something else.

In the same way that Raiders of the Lost Ark had a slight amount of truth to it (in the sense that certain Nazis did have an obsession with ancient artifacts), so there is some truth to conspiracies of the Dead Sea Scrolls kind. It's a story that came from a man named Miles Copeland (the late father of Stewart Copeland, the drummer with The Police).

During the Second World War, Copeland was attached to the United States' Strategic Services Unit, moving onto the Counter-Intelligence Corps and, in 1947, to the CIA. It was in that same year that Copeland took on the position of CIA Station-Officer in Damascus, Syria; an office that was housed within the American Embassy. According to Copeland, one morning in the fall of 1947 his office received a visit from a mysterious Bedouin man who was acting in a near-cloak-and-dagger-fashion. He presented the puzzled Copeland with something amazing: an old parchment that was clearly extensive, and which had been carefully rolled up and tied together with string. 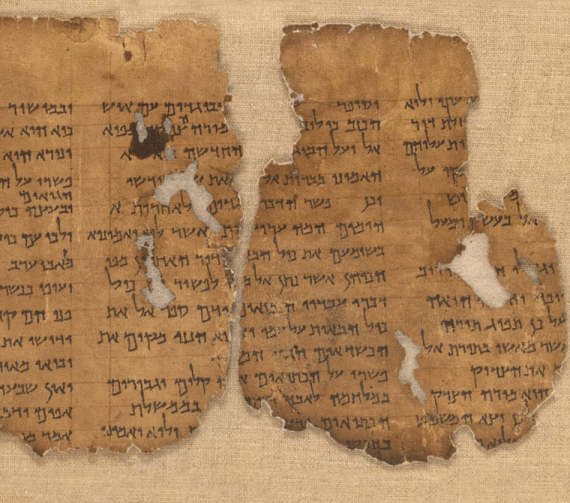 Realizing that what had fallen into his lap was of profound, archaeological significance, Copeland had a mountain of questions for the shadowy man who turned up so mysteriously. The man was having none of it, however, and left the building, vanishing into the midday throng. But, that was only the beginning of the puzzle. With two colleagues, Copeland headed to the roof of the Embassy, unrolled the parchment, and carefully photographed every section of it. Unfortunately, some of the scroll was lost, as a wind blew in, carrying fragmented portions off the roof. According to Copeland, close to three dozen photos were taken. Copeland was convinced that what he had seen was a Dead Sea Scroll; a previously unknown one. Then, when he told CIA headquarters of what had just gone down, something very intriguing occurred.

Copeland was ordered to have the scroll dispatched to the American Embassy in Beirut, after which it was flown to the United States, and handed over to senior personnel at CIA headquarters. It has never been seen again – at least, not outside of officialdom. And why was the scroll never seen again? Well, that's the mystery that still remains to be resolved...