A Strange Encounter with Angels. In Space.

Space is often touted as the last frontier, the final wilderness that we have yet to tame or understand, and in many ways this is very true. We have only within the last century really begun to comprehend some of its secrets to any appreciable degree, and there are certainly wonders beyond our imagination for us yet to behold. Yet some mysteries that have been encountered out there in the cold dark of space go well beyond conventional understanding, to propel out into the world of the paranormal and the universe of the truly bizarre. Certainly ranking among these mysteries is a curious close encounter between some of the first people in space and, well, something else.

In April of 1982, the Soviet Union launched its ambitious Salyut 7 space station as part of the Soviet Salyut Programme, which started in 1971 and had the aim of eventually sending up a total of four crewed scientific research space stations and two crewed military reconnaissance space stations. The last to be launched in the program and a precursor to the Mir space station, the Salyut 7 was the 10th space station ever put into orbit by mankind, and was designed to serve as a sort of test of a new system of modular space stations, which entailed the ability to attach new modules to expand the station or adapt it to whatever functions were required, as well as an outpost for various off-planet experiments. The Salyut 7 would end up staying in orbit for a total of 8 years and 10 months, which up until that time was the longest such a station had ever remained in continuous orbit. It is also known for a very bizarre series of bizarre, unexplained events witnessed by the crew.

In July of 1984, the Salyut 7 was on the 155th day of its mission and things were going in a routine fashion until there was a sudden transmission from cosmonauts Commander Oleg Atkov, Vladmir Solovyov, and Leonid Kizim in which they claimed that the space station had suddenly been surrounded by an oppressive, blinding orange light. The crew of three aboard the Salyut 7 all then allegedly looked out of the portals to try and see what was causing this inexplicable brilliant glow. At this point they would witness probably the last thing they had expected to see out there.

There hovering in space in front of the space station were what the crew would describe as seven enormous winged humanoid beings estimated as being around 90 feet in height and with calm, smiling faces, and it was from these bizarre entities that the ethereal light was apparently emanating. They were also claimed to exude a feeling of calm and peacefulness, and oddly the cosmonauts felt no fear during the encounter, merely wonderment. According to the witnesses, the colossal apparitions, which they described as “angels,” matched the speed of the space station, remaining in the same position for around 10 minutes before fading away. Baffled by what they had all just seen, the three cosmonauts had a heated discussion on what the beings were and what rational explanation could account for it, but they could come up with nothing. In the end, although they had all seen exactly the same thing, they chalked it up to the stresses and rigors of being in space for so long, resigning themselves to the explanation that their minds had simply been playing tricks on them.

They may have gone on forever convinced that this was some sort of mass hallucination and a bout of temporary insanity, but it would not be their last encounter with these otherworldly beings. On Day 167 of the mission, the Salyut gained an additional three cosmonauts in the form of Svetlana Savitskaya, Igor Volk and Vladimir Dzhanibekov. Not long after these new crew members boarded, the station was once again bathed in that potent, bedazzling light, and this time all six of the crew looked out of the portholes to see several of the massive angelic beings swimming through the blackness of space outside, again with their benevolent smiling faces. Considering that this time they had again all seen the same thing, it appeared that there was perhaps something more going on beyond simple hallucinations. 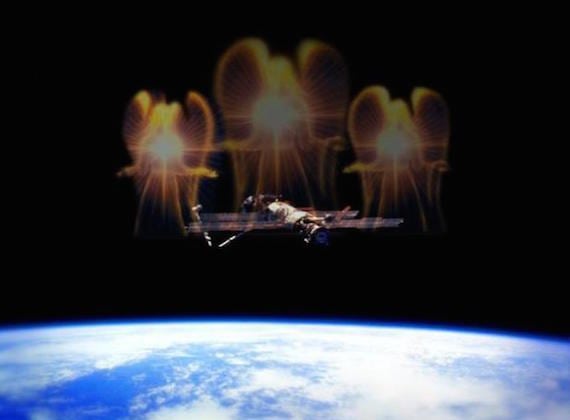 When the Salyut mission was concluded and the cosmonauts returned to Earth, their strange experiences were allegedly covered up and swept under the carpet by the Soviet government, and the witnesses told in no uncertain terms that they were never to discuss what they had seen up there. Interestingly, intensive rounds of physical and psychological tests performed on the space station crew supposedly showed nothing out of the ordinary whatsoever. They were perfectly sound of body and mind.

Considering the thick secrecy surrounding the odd events, the story did not really get any wider coverage until after the Cold War, but when it did get out it immediately ignited a firestorm of debate and speculation as to what the cosmonauts had really seen. The most rational and scientific answer is that these cosmonauts experienced what they had suspected in the beginning, which is some sort of mass hallucination or madness brought on by the demanding stresses, fatigue, and the harsh conditions of space. After all, no one had ever really spent this much time continuously in space before, and so it should be only natural that they should have such visions.

Indeed, such surreal visual phenomena have been reported by other astronauts and cosmonauts who have been in space for long periods of time, and even earthbound pilots on long, demanding flights. The problem with this explanation is that six seasoned, experienced cosmonauts all saw the same thing at the same time, and all of them were given clean bills of mental and physical health afterward, making it seem rather unlikely that this could all be in their heads. It also seems rather implausible that a group of six highly trained, well-respected cosmonauts would get together and make up such a story as a hoax.

Another fairly rational explanation is that they witnessed some strange, unexplained natural phenomenon and simply misidentified what they were seeing, but even if this were true, why would they all give the exact same description of winged, angelic entities with smiling faces? Getting into more fringe ideas is that these were actual, literal angels, and that their appearance heralded some sort of prophetic information, or that it was even a portent of the Biblical end of the world. There have also been all sorts of claims that everyone from NASA to world governments, to the Illuminati and even the Vatican itself know the truth about the existence of these “space angels,” and that it is all being covered up and kept from the public, with conspiracy theorists routinely producing photographs from space stations and the Hubble Telescope that purportedly show photographic evidence of such entities.

So what in the world did the cosmonauts of the Salyut 7 see? Unbelievably, there have been other accounts of being visited by similar apparitions in space, with some cases coming even before the Salyut 7 sightings. Supposedly the very first human to go into space, cosmonaut Yuri Gagarin, had his own encounter with such a creature in April of 1961. At two points during his spaceflight aboard the Vostok-1, Gagarin inexplicably went silent and lost contact, and when he was asked about it later he was not sure what had happened, thinking he may have just briefly lost consciousness. During hypnotic regression, Gagarin claimed that he could remember seeing an enormous, mysterious figure floating in space in front of him, and that he had heard a voice in his head saying, “Do not worry, everything will be fine. You’ll come back to Earth,” before the apparition vanished into thin air right before his eyes. Hallucination or not?

More recently, in 2008 a former member of the Space Shuttle Fleet named Clark C. McClelland came forward to claim that he had years earlier observed a similar being while looking over some monitors of a space shuttle mission at the Kennedy Space Center while on duty at the Launch Control Center (LCC). He claims that over one of the 27-inch monitors he not only observed an enormous entity between 8 to 9 feet tall in the space shuttle’s payload bay, but also that it was actually interacting with the astronauts. He would say of what he saw thus:

The ET was standing upright in the Space Shuttle Payload Bay having a discussion with TWO tethered US NASA Astronauts. I also observed on my monitors, the spacecraft of the ET as it was in a stabilized, safe orbit to the rear of the Space Shuttle main engine pods. I observed this incident for about one minute and seven seconds. Plenty of time to memorize all that I was observing. 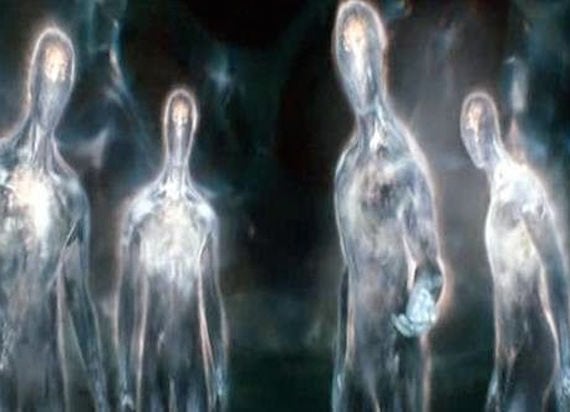 McClelland claimed that others had seen the incident too, and that they had been told to keep quiet about what they had seen, meaning that he had sat on this hauntingly bizarre experience until after he retired. He also claims that the government has regular dealings with these creatures and that it is all kept top secret. In this case the entity mentioned is certainly described as an alien of some type, but its sheer size makes it interesting in relation to the space angel phenomenon, and makes one wonder just what it really was this man saw, if anything. Does this story have any credibility at all or is he just a loon?

So there you have it. Angels. In space. This last frontier has a lot of strange stuff in it, but perhaps not much that is as strange as this. Just what is going on here? Was this hallucinations seen by all of these crew members? Was it something else? Who knows? Considering the original news reports of the phenomenon have been quietly relegated to the background and are only really discussed on Internet forums by people who have noticed just how outlandish the story is, we may never know for sure. It remains just one more anomaly on perhaps a whole road of anomalies just waiting for us as we delve ever deeper into the reaches of our universe.

‘Time Traveler’ to Run for President and Reveal the Technology