If it looks like a flying saucer and it’s in a photograph, does it matter that the owners of the picture don’t remember seeing it? This is an age-old dilemma in the ufology world and it’s playing out again in Slovakia, where a father and son are claiming that the strange thing in a nature photo they took on a recent trip is none other than a flying saucer. Is it of alien origin, a hoax or something else? Will it help business at the UFO restaurant in Bratislava? Have you tried the smoked teeth? Wait, what?

First things first. The photograph and story first appeared on December 4th on the Topky.sk news portal (photos and original Slovak report here) in Bratislava. The father, identified only by his first name – Miroslav, was said to be in Banská Štiavnica, a town in central Slovakia located in the middle of the caldera of an ancient volcano now called the Štiavnica Mountains. That may be significant in identifying the object since the area has been mined for metals, especially silver, ever since it was founded by Celts in the 3rd century BCE.

It was shortly after the father and son left Banská Štiavnica that they took the mysterious photo.

"It was beautiful weather, we went to Banská Štiavnica, the photo was created for the rides between Píla and Horné Hamre in the direction of Žarnovice."

Upon returning home, they were viewing their photographs when they spotted the UFO over the Kľakovská valley, a beautiful and historic location in central Slovakia. Unable to identify it, they “turned to an expert” -- Miroslav Karlik, who is introduced as the head of a UFO club in Trnava in western Slovakia, northeast of Bratislava. He is quoted as saying:

"The photo is definitely right, it has not been electronically modified, it is about 12 meters long and about three meters wide, an unidentifiable flying object. "

Well, that settles it … not. The 40-by-10-foot object has nothing to distinguish it as something other than a thrown pie pan, which is the general consensus of commenters on many websites, despite the analysis of the UFO expert. One suggested it looked more like the roof of a house hidden in the trees, which is definite possibility since there’s only one photograph of the UFO, making it difficult to determine if it was moving or if the blur was from the moving car.

If it IS an alien spacecraft, it could be looking for silver for fuel or parts, which is often the explanation for the frequency of UFOs seen around silver mines in South America. Or it might be checking on the Bohunice Nuclear Power Plant or the Mochovce Nuclear Power Plant, which Bratislava sits approximately in-between. 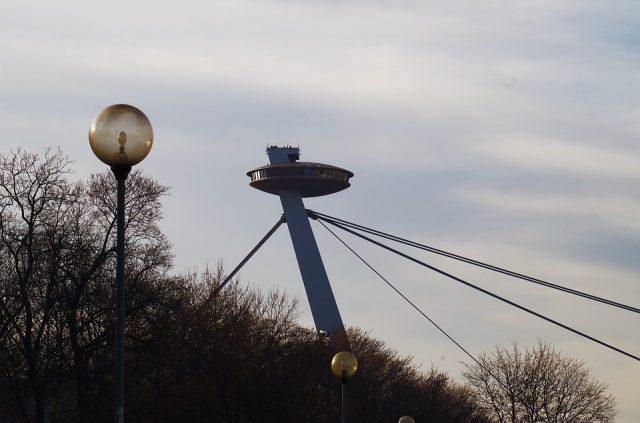 Could it be a publicity stunt for the UFO restaurant in Bratislava? This popular Slovak and nouveau cuisine establishment shaped like a UFO-on-a-stick probably doesn’t need any help, although Google’s translation of one dish on the Slovak menu comes out as “smooth smoked teeth,” not smoked fish. Is this scaring tourists away and forcing a UFO ad campaign for UFO?

While it seems like the area could be attractive for ET visitors, ‘flying pie pan’ is leading in the polls. 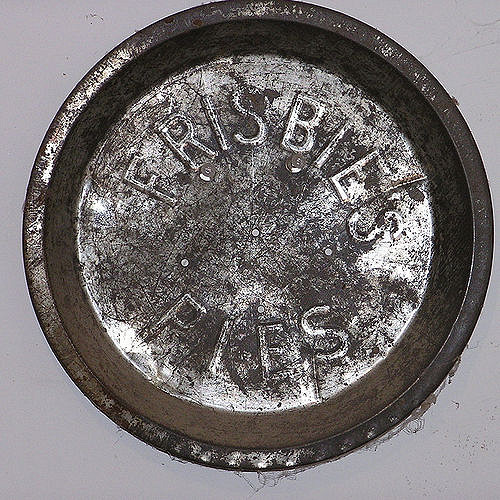