Ghosts on the Loose after Old Canadian Orphanage is Torn Down

Where do ghosts go after the building they’ve haunted for years, perhaps even centuries, is torn down? The residents of St. John’s, Newfoundland and Labrador, are about to find out. The Belvedere Orphanage, which dated back to the 1850s, was demolished earlier this month after being severely damaged by a fire in April, 2017. The building had not been used as an orphanage for decades and had been vacated by the living for a few years, but the ghosts of residents, particularly teenage girls rumored to have been abused, must now find peace or a new home.

Historical accounts date the property and the first large home on it back to 1826, making it the third-oldest building in the city prior to the fire and demolition. The property was purchased by the influential and controversial Catholic Bishop Michael Anthony Fleming, who died in the house in 1850, although it doesn’t appear he was one of the ghosts. In 1859, a convent on the property became an orphanage for girls run by the Sister of Mercy. Either the place was popular or St. John’s had a lot of orphans because a bigger building replaced it in 1885 and that became known as the Belvedere Orphanage.

The orphanage closed in 1967 and the building became a school house, school board offices and a home for the local Catholic newspaper. News of abuses at the orphanage finally came out in the 90s and, while no charges were ever filed, the Sisters of Mercy abandoned the old building in 1999. While there was talk of turning the property into a residential condominium complex (a controversial move because it was a heritage site), nothing was done. The fire may have solved that problem.

But what about the ghosts? Lorraine Michael, the interim NDP leader for Newfoundland and Labrador, was a nun at the school and principal of the Belvedere Junior High School from 1971 to 1976. She told the Times Colonist about her many experiences there while living in the convent.

“It consisted of walking noises, somebody walking, and always on the top floor of the building.”

A janitor frequently found classroom doors opened after he had closed them. Employees occasionally refused to come into the building alone because they heard footsteps. A visitor from Argentina felt the “suffering of young girls” and believed the incidents were caused by the ghost of one. A paranormal expert who visited the orphanage while Michael was there agreed. 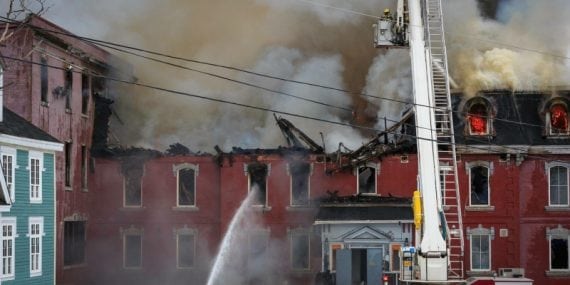 “If the poltergeist was connected to the experience in the building — and I’m not an expert — but I assume now the spirit will be at rest.”

Will it? If the girl was buried there, secretly or otherwise, she could move on to the condos or whatever takes the place of the orphanage.

Whether you believe in ghosts or not, abuse continues to haunt us every day.

The Origins of a Monster-Hunter