Archaeologists excavating a series of sand dunes on the California coast made the discovery of a lifetime - well, almost. It’s certainly one that will make for great conversation starters at those post-conference wine receptions. You know, the ones with the terrible cheese and cracker trays and all the preening academics all trying to be the smartest one in the room. When combing through the deep sands of the Guadalupe-Nipomo Dunes, the archaeologists came across an intact sphinx head measuring 5.5 feet by 3 feet by 8 feet (1.6m by 1m by 2.4m) and weighing around 300 pounds (136 kilogram). While the discovery of a sphinx in California would normally be cause for the re-writing of many history books, unfortunately the story of this sphinx has less to do with an unknown chapter of North American history and more to do with California’s cinematic legacy.

It turns out the sphinx head is actually a set piece left over from the set of the 1923 epic silent film The Ten Commandments directed by Cecil B. DeMille, one of the “founding fathers” of American cinema. The Guadalupe-Nipomo Dunes Center says DeMille built the largest movie set ever constructed in the middle of the California desert for The Ten Commandments then had it torn down and purposefully buried among the desolate sand dunes so that future filmmakers couldn’t use it. DeMille’s posthumous autobiography contained a few clues which led archaeologists to this “City of the Pharaohs.”

Still, the find is remarkable in its own right. According to archaeologist Doug Jenzen, executive director of the Guadalupe-Nipomo Dunes Center who led the excavation, the find was incredible. “The piece is unlike anything found on previous digs," Jenzen said in a press release, "The majority of it is preserved by sand with the original paint still intact." The Dunes Center plans to display the piece alongside other artifacts from DeMille’s productions, including prohibition-era liquor bottles and tobacco tins. 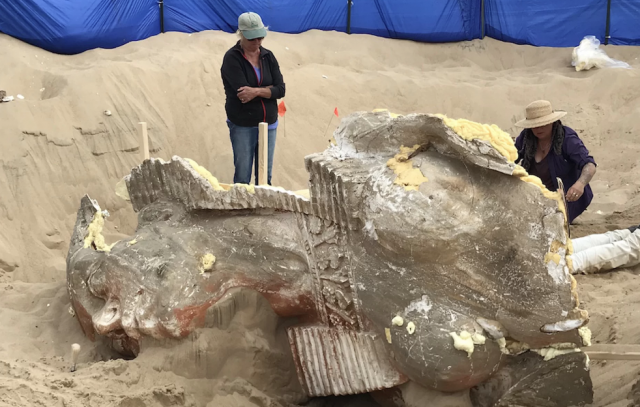 I love stories like these; they really make you wonder what future civilizations will think of all the stuff of ours they find lying around - that is, if we leave anything but a wasteland of radioactive glass behind.  Think about all the replica architecture being built in China, or all of the weirdness found at theme parks. Will future archaeologists be able to deduce what they were? Think just how wrong they might get it when excavating the ruins of, say, The Wizarding World of Harry Potter at Universal Studios. Will they think an ancient race of wizards lived in Orlando, Florida? Now, just consider how much of our historical knowledge we likewise base on deductions made of stuff we find in the ground. Who knows how far off we could be?

A Creepy Critter and a Great Snake