Micro-Blimp Drone to Explore Inside the Great Pyramid

This is the job I want. The researchers who recently used cosmic rays to find a massive previously-unknown “void” inside the Great Pyramid are now planning to drill a hole, shove a deflated micro-blimp drone through it, inflate it and send it around the insides of the pyramid. Can a blimp outrun a mummy with a dagger?

The idea for this great movie plot comes from the folks at ScanPyramids, a group of engineers from the Heritage Innovation Preservation (HIP) Institute in Florida and the University of Cairo. They’re the researchers who used “cosmic ray imaging” to measure subatomic particles from space as they passed through the Great Pyramid to map its insides and possibly find unknown voids and chambers. As revolutionary as that is, all it gives is a type of x-ray image of the insides. Since Egypt’s government blocks humans from entering the pyramid, there has to be another way to see inside the real thing. 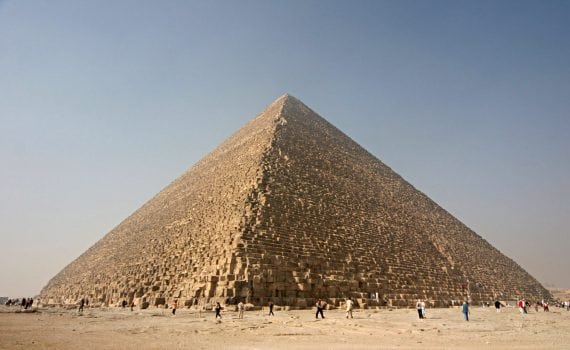 Enter Dr. Jean-Baptiste Mouret (a perfect movie name for a pyramid explorer). A senior researcher at Inria (“Inventors for the Digital World”), Mouret studies “machine learning and evolutionary computation as a means to design highly adaptive robots.” In a recent interview with Digital Trends, he first describes how he would get a robot inside the pyramid.

“The main challenge is to insert a complete exploration robot in a hole that is as small as possible. It is important to use a hole as small as possible because we want to leave as few traces as we can. This what we call ‘minimally invasive robotics.’ We chose a diameter of 1.5 inches because it is a good trade-off between the size of the hole, the kind of machines that can bore holes, and the current robotics technologies.”

Assuming he or the people at ScanPyramids can get permission to drill a 1.5 inch (3.5 cm) hole into the pyramid (two monumental tasks), Mouret would then send in his specially-designed micro-blimp drone through the hole and self-inflate it once inside.

“[These robots] can touch obstacles without crashing and without risking damage to the monument. They are, moreover, intrinsically stable, which is important for taking pictures in low-light conditions, and they are more energy-efficient than multi-rotors.”

The blimp-bot would be remotely-controlled, but it will have autonomous capabilities to find its way back to its docking port and entry/exit hole should it lose communications.

Why would it lose communications? Can robots be affected by mummy curses? Would the curse be passed on to the robot’s inventor, owner or operator? Would the movie based on this be a thriller or a comedy?

Those are points to ponder while Dr. Jean-Baptiste Mouret waits for the proper permits to be approved by Egypt’s Ministry of Antiquity. Meanwhile, he plans to use the technology at other buildings or archaeological sites that can’t be explored by humans.