Allison Jornlin has been investigating hauntings and other strange phenomena for more than 20 years and is the recipient of the 2016 Wisconsin Researcher of the Year Award from the Milwaukee Paranormal Conference. Allison was inspired by Chicago’s Richard Crowe, who kickstarted U.S. ghost tourism in 1973, and she developed Milwaukee’s first haunted history tour in 2008. Since then, she has led numerous haunted history tours and presented talks on a variety of Fortean topics; poltergeists, UFOs, cryptids, and demonic possession. Allison is also involved in planning the Hawaii ParaCon, the first paranormal conference in Hawaii, coming up in Honolulu in July 2018. Currently, Allison is investigating the 2017 Mothman sightings in Chicagoland. 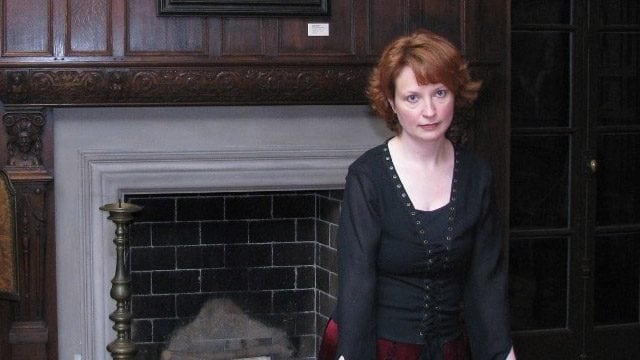 To my mind, Allison is one of the most thorough, level-headed, and --crucially in this field-- good-humored paranormal researchers working today. She believes it’s always best to think for yourself. Suspicious of the unsubstantiated claims of both believers and self-described skeptics, Allison suspects the truth lies somewhere in-between these two extremes.

Here, Allison discusses recent developments relating to the cryptid popularly known as Mothman and shares her own considered perspective on what may or may not be behind the Mothman flap of 2017...

When did the recent Mothman flap of Chicago sightings begin?

AJ: Almost all these reports come from Lon Strickler’s Phantoms & Monsters blog. He also created an interactive map of all the 59 original sightings.

There were three reports in 2011. In 2017, the first sighting to come to light was in Oz Park near the eastern part of Chicago near Lake Shore Drive on April 7th. The account features a 7-foot-creature described as resembling “the character Birdperson from the show Rick and Morty” standing on the ground which stared at the witness with “ruby red” glowing eyes. The creature screeched, “unfurled” its wings and “jetted” into the sky.

However, earlier accounts surfaced later, the earliest report coming from February 4th in which a driver on I-294 (Tri-State Tollway) after midnight claimed to see what he thought was a person running across the highway until the figure “shapeshifted into a giant blackbird” and flew away.

What else have the witnesses reported?

AJ: The description of the creature varies wildly in some of the accounts, but most of the reports describe a dark 7-foot-tall creature with a 10-foot-wingspan. According to witnesses, it does have a distinct, but small head that is almost tear-drop shaped or crested. The 1966 Mothman was sometimes described as having no visible head, but large red eyes that seemed to be glowing out from the torso. The Chicago Mothman has also been described with red or orange glowing eyes. Many accounts also refer to an overwhelming feeling of dread conveyed by the creature as did the Point Pleasant Mothman sightings. 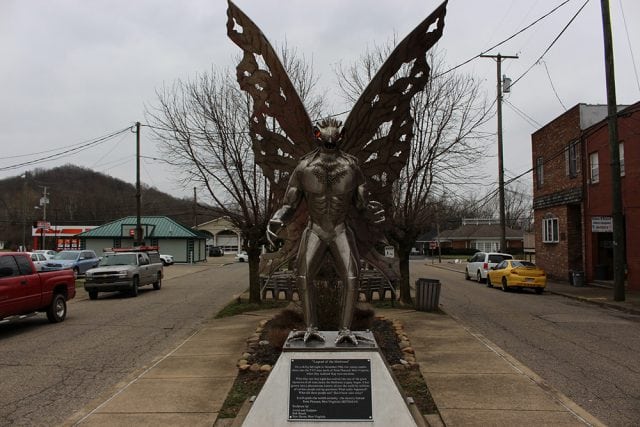 Where has he been sighted in Chicago?

AJ: Reports have come from all over Chicagoland from the East on Lakeshore Drive all the way out to the Western suburbs near Naperville and from the North to the suburb of Elgin and to the South all the way to Tinley Park and even one report from just over the border in Indiana. Most sightings reportedly occurred in densely populated very busy areas, so what is really unusual is that more people haven’t reported seeing the creature. Especially in the very touristy locations along Lake Shore Drive, you’d expect multiple witnesses, just crowds of people to have seen the creature simultaneously.

How do these recent sightings differ from those in Point Pleasant, West Virginia?

AJ: Unlike the 1963 case in Kent in the UK and the most well-known cases from 1966-1967 in Point Pleasant, West Virginia which often featured UFO sightings, there doesn’t seem to be any UFO sightings associated with the Chicago Mothman reports.

How many of the Mothman sighting locations have you visited?

AJ: I’ve visited all 59 of the original Chicago Mothman sighting locations, although Lon Strickler has since removed 4 of the locations from his sightings map for unknown reasons.

What have you found?

AJ: Unfortunately, my opinion is that most of the reports are fraudulent (which is so disappointing because I love monster-hunting). I say this because there are many suspicious elements in the accounts: colorful, short story format; implausible, lofty word choices; repeating movie-like tropes (the creature majestically silhouetted against the full moon or the night sky, or ascending straight up without flapping its wings or swiping at a car windshield). MUFON’s Sam Maranto has also revealed to me that a significant amount of reports came from the same IP address and cited weather conditions or moon phases in the accounts do not line up with the facts. I’ve also discovered inconsistencies in witness statements compared to what I saw at the locations.

So, there are multiple inconsistencies in many of the reports, could you give us some examples?

AJ: In the account from Melrose Park on 7/29/17, which occurred in the parking lot of a very busy strip mall. 2017’s only Mothman photo does not match with what the witness reported. The witness stated that as soon as she came out of Best Buy this winged humanoid fly swooped down in front of her and fly off. She was able to find her phone and quickly snap a photo. I spent way too much time in that parking lot, lining up landmarks to take a matching photo. As result, I found the exact location where the photo was taken, mid-parking lot, quite far away from the Best Buy. I also matched up the snap in the photo. It closely resembled a plane, which there are plenty of since the area is right in the flight path of O’Hare airport. I saw and took photos of way too many jets flying overhead.

In the account from Miller Park from 9/30/11, the area does not match up with what’s reported. There is no basketball hoop in the tiny toddler playground reference for the Mothman to perch on. A five-story apartment building is also the scene of Mothman-induced terror in this report, but, unfortunately, there are no building meeting this description nearby, only 3 story structures are in the area.

On 6/29/17, there were two accounts, one purportedly from a police officer, who says he filed a police report. Unfortunately, no such report exists. 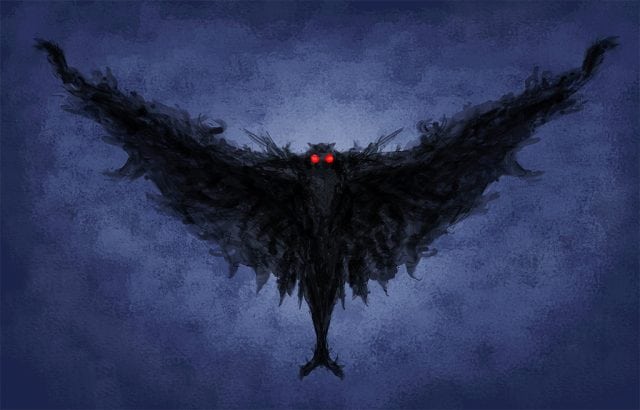 Which of the witness accounts do you find most credible?

AJ: There is only one I find credible because I’ve only been able to talk to one witness. State director of MUFON for Illinois, Sam Maranto shared this witness.

Other investigators have refused to share witnesses with anyone and, so far, very few have come forward publicly.

On 3/22/17 truck driver Billy Bantz reported watching a strange flying object the size of a “large automobile” with what looked like on bat-wing shaped protrusion. Straight from the witness this sounds more like a UFO sighting over Cicero Ave. than an encounter with the Mothman.

What did you think is going on? What are the possible explanations for the Chicago flap?

AJ: Perhaps a very motivated hoaxer or a government disinfo campaign to distract us from something else. It could also be some kind of performance art project, or an elaborate ruse perpetrated by cynics who hope to expose shoddy investigative methods used by paranormal investigators and discredit believers. In any case, we need to be careful as investigators and not just take witness testimony at face value without due diligence to make sure the stories add up.

Why would the government launch a disinformation campaign of this magnitude?

AJ: One or two of the sightings is authentic and government agents are hiding that fact by muddying the waters with a lot of bogus cases. Or perhaps they are trying to distract us from something else.

What can this social phenomenon teach us about research into the paranormal?

AJ: Well, unfortunately, it has taught me that, at least in the case of the Chicago Mothman, there is an over-reliance on witness reports that have not been corroborated with location, weather, or other factual data that is easy to verify. The problem is then that anyone could make something up and waste investigator time while there are real mysteries out there that remain unexplored.

Has the Mothman been reported in other countries?

AJ: Yes, even before the most famous sightings in Point Pleasant, there was an eerily similar case in 1963 in Sandling Park, Hythe, Kent on November 16, 1963. A group of teenagers spotted a UFO and then moments later watched a dark winged humanoid emerge from the nearby woods. In 1978, The Freiburg Shrieker, a large winged screeching creature, terrorized a group of German miners obstructing their path and preventing them from entering a mine would cave in only an hour lately, effectively saving their lives. In LaCrosse, Wisconsin in 2006, a bat-winged humanoid chased after a car panicking the father and son inside who could not outrun the flying beast, which thankfully eventually lost interest. Winged creatures compared to gargoyles have also been reported recently in Puerto Rico according to the Puerto Rico UFO Network. There are even more reports of winged beasties that more closely resemble a pterosaur worldwide.

Do you think the Mothman could be real? Have sightings of Mothman or similar cryptids been reported in the Midwest?

Be sure to visit Allison's YouTube channel, where you can find her on-the-ground, non-sensationalised perspectives on the Mothman cases as they continue to unfold.