Princess Leia Carried a Russian Pistol from a Blind Gunmaker

Whether you liked the new Star Wars film or not, if you believe that Disney is cashing in big time on Star Wars: The Last Jedi, you’re not alone. Besides all of the action figures, toys, apparel, jewelry and high-end electronics, it’s working on two Star Wars Lands at its theme parks in California and Florida and a Star Wars TV show. Then there’s Disney’s acquisition of 21st Century Fox's film and TV studios which released the first six Star Wars films. But Disney isn’t the only large organization looking to make a fortune on the Force. On the day the new film hit the theaters, Kalashnikov Media, the marketing arm of the Kalashnikov Group, revealed that the gun used by Princess Leia in Star Wars: Episode IV – A New Hope was a modified version of an historic Soviet pistol.

“Did you know that Princess Leia used a Soviet Margolin pistol in the original trilogy?”

According to a translation of the post on Kalashnikov Media’s Facebook page, the thin-barreled gun Leia used to fight stormtroopers after hiding plans for the Death Star in R2D2 (it also appears briefly in Return of the Jedi) was based on the Margolin or MCM pistol, a practice shooting pistol designed in 1948 by Mikhail Vladimirovich Margolin. That in itself was a heroic feat because Margolin was blind! 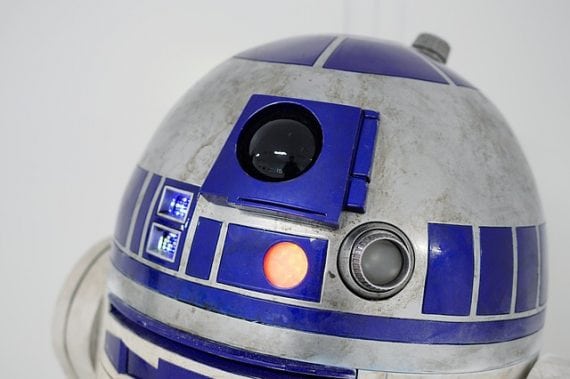 An article in Russia Beyond explains that Mikhail Margolin lost his sight from a head wound during the Russian civil war (1917-1922). While teaching at a Soviet military academy, he learned gun design by touch and created models with clay, plastic and metals. In 1948, he designed the MCM Pistol, a target shooting pistol of training and competitions.

Wait, what? A blind designer creates a target shooting gun? Critics at the time felt the same way, especially since the gun had an unusual high line of sight – a feature also used on the AK-47 which was designed at about the same time and had not yet proven itself in battle. The high sight line allowed the shooter to hold the pistol lower and aligned the barrel with the shoulder, giving improved control in rapid fire competitions and close-up encounter. All concerns were alleviated in 1954 when the MCM Pistol made its debut at the 36th World Shooting Championships in Caracas, Venezuela, and performed well. (Pictures here and here.)

So why did Princess (at the time) Leia use a modified Margolin or Defender Sporting Blaster as it’s called in the movie? The 5.6 mm gun weighed 940 grams (2 lbs.) and that may be why director George Lucas went with it, according to Kalashnikov Media.

“Set decorators chose it [the pistol] because of its elegant design. Only this pistol looked good in Cary Fisher’s petite hands.”

There you have it. Despite the fact that Leia could and did handle much larger weapons in the first and subsequent Star Wars films, the modified Margolin was chosen because it looked good in her tiny hands. What would Carrie Fisher say if she knew this?

Does this sudden interest indicate that the Kalashnikov Group is planning to capitalize on the Margolin’s role in Star Wars lore? It’s a little late for that and they probably can’t get the licensing rights for toys. However, that wouldn’t stop it from offering a line of real Star Wars pistols.

Fortunately, no one at Kalashnikov needs to worry about opening the door to an armed Leia looking for the guy who said she had petite hands.

“They Could Easily Have Swallowed A Child”