Russia is Planning a Luxury Hotel on the Space Station

Now that everyone is talking out in the open about UFOs, including the US government and military, it will only be a matter of time before outer-space hotels start opening up to cater to tourist who want to see the unidentified objects from a better vantage point than their backyards. How much time? Try right now. The Russian space agency Roscosmos announced it is planning to install a luxury hotel module on the International Space Station to cater to space tourists. Will the Russian ISS hotel minibar be stocked with vodka and Tang?

The news about this planned Red Roof-of-the-Atmosphere Inn comes from Popular Mechanics magazine (motto: Grease is our favorite scent), which revealed this week that it somehow obtained access to a proposal by Roscosmos State Corporation, the government body overseeing the country’s space program, to add a 20-ton, 15.5-meter (51 feet)-long module to the ISS whose sole purpose would be to cater to space travelers. The 92 cubic meter (3249 cubic feet) will be designed to give four visitors their own 2 cubic meter (70 cubic foot) bedroom and one-half of a 2 cubic meter “hygiene and medical” station (bathroom). This orbiting B&B will also have a common area for lounging with fellow tourists, WiFi and exercise equipment (zero-gravity weightlifting anyone?). 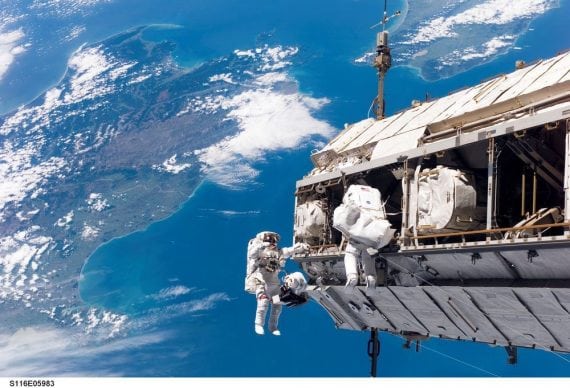 What about UFO spotting opportunities? For those on the standard package, each sleeping room will have a 9-inch (228 mm) porthole (think airplane window) while the communal lounge will have a 16-inch (426 mm) window (think small manhole cover) for four people to push and shove their way in front of for a better view. However, those who upgrade to the luxury package will get guided spacewalks accompanied by their own personal cosmonaut, who will point out the sights and say, “Look, there’s your house!” when the tourist starts to ask too many questions about strange objects whizzing by.

How much would you pay for a luxurious one-week-to-one-month stay at the ISS? If you have to ask the price, you probably can’t afford the $40 million minimum and the $4 million down payment so RKK Energia, Russia’s primary space contractor, can begin working on the space hotel. This is the same group that ran Russia’s original space tourism program which sent 7 space tourists to the ISS between 2001 and 2009, starting with American multimillionaire Dennis Tito, who paid $20 million for an 8-day stay. RKK Energia estimates it will take 5 years and 16.4 to 26.2 billion rubles ($279-$446 million) to complete its new outer-space place, so it’s looking to sign up as many people as it can for this out-of-this-world timeshare deal. They will probably be pushing the luxury package -- which includes spacewalks but requires a month-long stay, for just $20 million more.

Five years to build means the Motel ISS won’t be ready until 2022. It also means that reservations will be limited, since the US and Russia have agreed to retire the ISS in 2028. there’s no guarantee RKK Energia will be able to raise the funds or meet the deadlines without delays, cost run-ups or problems, so it might be wise to cover your space travel bets by placing a another deposit (if you can afford $40 million, you can afford a few million more) with Jeff Bezos’ Blue Origin program, which launched a space dummy on December 12th in a test of its planned suborbital tourism program, or with Richard Branson’s Virgin Galactic, which is projecting suborbital launches in 2018.

However, your chances of seeing a UFO are much better on a month-long trip orbiting 250 miles in space without worrying about NASA cutting the video feed on your window.

All it takes is money and patience.

Strange Encounters with the Mysterious Little People of…. Detroit?