Santa’s Reindeer are Females and Rudolph Had Parasites

Put the kids to bed and cover the eyes and ears of anyone who believes in Santa’s reindeer flying and Rudolph’s red nose leading … we’re about to do some carol-busting and it won’t be pretty.

Clement Clarke Moore and his classic poem, “The Night Before Christmas” (or "A Visit from St. Nicholas" for true traditionalists), took a big hit this week after a woman named Cat Reynolds posted a tweet that went viral:

MALE REINDEER LOSE THEIR ANTLERS IN WINTER AND FEMALES DON'T THEREFORE SANTA'S SLEIGH IS ACTUALLY PULLED BY A TEAM OF STRONG, POWERFUL, UNDERRATED WOMEN!!!!! YOU GO, GIRLS!! I SEE YOU!!!

Her emphatic use of all caps notwithstanding, that tweet caused such a stir that she took time from studying arctic animal husbandry for her final exams to respond to the mumbling masses with an article in The New Statesman defending her tweet, female reindeer and women in general.

“After the tweet garnered over 600,000 likes and 180,000 retweets, I learned a lot about strangers on the Internet and their feelings toward reindeer. First, an alarming number of people don’t know that reindeers are actual animals. And second, men get really, really angry when you try to take away their reindeer representation.”

It gets worse. She points out that, if you don’t want believe the science of animal husbandry and want Santa’s reindeer to be males, you may prefer the tradition in reindeer countries of using castrated males to pull sleighs … and the traditional method of castration is (brace yourself) “by biting the reindeers’ testicles with their teeth.” Keep that in mind when kissing Santa Claus.

Then there’s Rudolph, also a female. A science article in The Guardian by Kathryn Harkup reveals that reindeer noses are filled with folds full of blood vessel that warm the frigid air as they breath in and retain water vapor as they breath out. Unfortunately, those folds are nice warn hiding places for parasites – there are at least 20 different types that can reside in reindeer noses, causing more blood to flow to the nose to fight them off and giving the proboscis a bright red hue. Rudolph probably wasn’t Santa’s only red-nosed choice that night, but being the feisty female that she is, she guided his sleigh on that foggy trip with her female friends cheering her on, clogged noses and all.

Finally, Harkup gives an interesting twist to the generally accepted idea that the story of reindeer flying comes from the use of magic mushrooms – specifically, the fly agaric (Amanita muscaria), a white-speckled, red-capped ‘shroom that may also have inspired Santa’s outfit. While some have suggested that the reindeer ate the mushrooms and then began to dance and prance in a blitzin’ state, The Guardian suggests that local shaman ate the mushrooms, got high and later passed the hallucinogens in their pee, which was eaten by the reindeer, causing aforementioned dancing, prancing and blitzing. In fact, humans ate the yellow snow as well, giving origin to the phrase “getting pissed.” 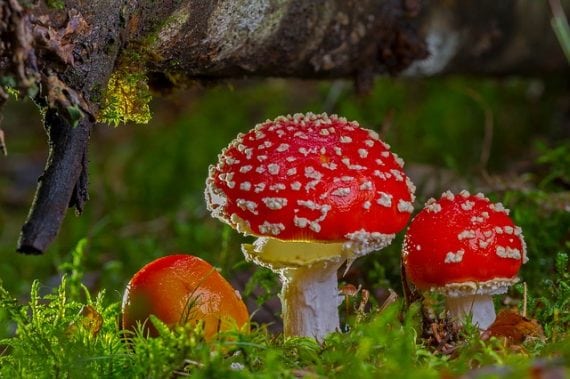 What does Santa say about all of this? He refused to comment but instead laid a finger aside of his nose and gave a nod, a wink and a laugh.