Texas is the second largest U.S. state in both area and population, spanning no less than 268,820 square miles, and with a growing population of around 28 million. Houston is its largest city and the fourth-largest in the United States; while the Dallas–Fort Worth metropolitan area is the biggest metropolitan area in the state, and the fourth-largest in the nation. Other major cities include San Antonio, and the capital: Austin.Texas contains diverse landscapes, resembling in places both the Deep South and the desert southwest. Traveling from east to west, one can observe piney woods and semi-forests of oak and cross timbers, rolling plains and prairie, and finally the desert of the Big Bend. But that is not all: deep in the heart of Texas lurks a wide array of mysteries, including tales of crashed UFOs; marauding monsters on the loose; ghosts, spooks and specters; and much more, as will now become acutely apparent.

Situated on the Big Cypress Bayou, the town of Jefferson has a long and rich history. During the Civil War, the people of Jefferson played a vital role in providing the Confederate Army with meat, hides, food samples, iron, munitions, and leather goods. But it was the years after the War that saw Jefferson really begin to shine, when hundreds of people from the devastated southern states poured into town, all seeking a new life.

Today, the town may well offer you the opportunity to see more than a few ghosts. Indeed, Jefferson is an absolute hotbed of spooky activity. Haunted hotels, spectral figures seen walking the old streets of the town, and even ghostly Civil war-era soldiers are part of the story of Jefferson. Moving on...

It was in the early hours of a hot morning in the summer of 1969 that six, terrified Fort Worth residents headed breathlessly for their local police station and told a remarkable tale. John Reichart, his wife, and two other couples had been parked at Lake Worth when a strange beast leaped out of the buckling branches of a nearby tree. Covered, curiously, in both fur and scales, it slammed with an almighty bang onto the bonnet of the Reichart’s vehicle and tried to "grab" the hysterical Mrs. Reichart, before bounding off into the endless darkness and the cover of the thick woods. Its only tell-tale calling card: an 18-inch-long scratch along the side of the car. The legend of Lake Worth's "Goat-Man" had begun.

Although this particular incident quickly gathered widespread publicity and was taken very seriously by the police – no less than four units were dispatched to the scene – it was not the first time that the authorities had heard dark tales of weird things lurking within the heart of the woods of Lake Worth. Not at all: for no less than eight weeks, sightings of a strange animal had been quietly discussed among the superstitious locals, and the police kept a careful watch on the unfolding drama, preferring to attribute the reports to the work of juvenile pranksters, rampaging around in ape costumes.

Constructed in 1911 as Dallas’s first reservoir, White Rock Lake has nine and a half miles of shoreline, thick trees, a path for walkers and cyclists, and is home to an estimated thirty-three types of mammal, and no less than fifty-four varieties of reptiles, among which are rattlesnakes, turtles, a whole variety of lizards, and horned toads. Salamanders and frogs also abound, along with an incredible 217 species of bird, including swans, pelicans, sea gulls, loons, and all manner of ducks.

And this inviting body of water is also said to be the home of a legendary ghost known as the Lady of the Lake. So the story goes, a Dr. Eckersall, a local physician, was driving home from a country-club dance late one Saturday night when he saw a young girl by the lake, who he suspected was in trouble. He quickly stopped his car, and motioned her to climb into the back seat of his vehicle. "Please, please take me home," she begged. 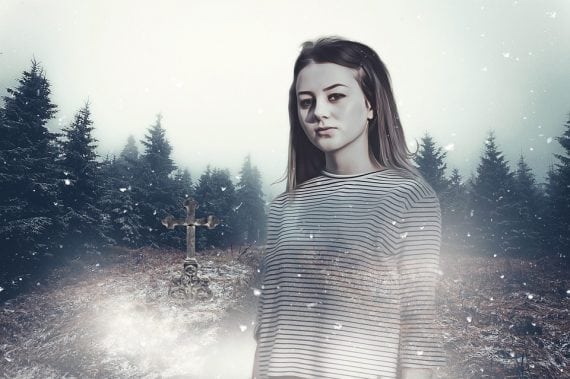 The doctor drove rapidly to her destination, and as he pulled up before the shuttered house, said: "Here we are." Then he turned around. Yes, you guessed it: The back seat was empty, except for a small puddle of lake-water dripping down onto the floorboard. He thought for a moment then rang insistently on the house bell. Finally, the door was opened by a gray-haired man. "I can’t tell you what an amazing thing has happened," began the doctor, breathlessly. "A young girl gave me this address a while back. I drove her here and..."

"Yes, yes, I know," the man wearily interrupted. "This has happened several other Saturday evenings in the past month. That young girl, sir, was my daughter. She was killed in a boating accident on White Rock Lake almost two years ago."

According to ghost-hunter Lisa Farwell: "One of the scariest reports of the ghost appeared in a 1987 Dallas Times Herald article by Lorraine Iannello. Iannello interviewed a mother and daughter, Phyllis Thompson and Sue Ann Ashman, who had a frightening encounter with the female phantom. The two were sitting on one of the boat docks at night when they spotted a white object floating in the lake. The women heard a blood-curdling scream and saw the white object roll over onto its back. The object turned out to be a body; it stared at the horror-stricken women through big, hollow sockets where the eyes should have been. Then, just as quickly, the terrifying sight disappeared."

The story of an alleged UFO crash in the little town of Aurora, Texas on April 17, 1897 has become legendary within UFO research circles. So the extremely controversial tale goes, an "airship"-type alien spacecraft is said to have slammed violently into the windmill of one Judge J.S. Proctor, resulting in the catastrophic crash of the other-worldly vehicle, and the hasty burial – by the townsfolk - of the dead, diminutive pilot at an unmarked grave in the Aurora Cemetery. To this very day, the cemetery contains a Texas Historical Commission marker mentioning the incident. A portion of the second paragraph on the marker states: "This site is also well known because of the legend that a spaceship crashed nearby in 1897 and the pilot, killed in the crash, was buried here."

Gerald, a now-retired refinery-worker lives near the southeast Texas town of Kountze, and had a startling and close encounter of the Bigfoot kind in June 1977 - interestingly enough, around the witching hour, and when he was driving past the town’s Old Hardin Cemetery, no less. Suddenly, his car’s engine began to falter and its lights faded; and Gerald, thinking that perhaps a fuse was to blame, carefully brought the vehicle to a halt at the side of the road. However, as he exited the vehicle to take a look under the hood, at a distance of perhaps fifty or sixty feet from him, Gerald saw a tall, and very skinny, dark, hair-covered figure walking across the road, "like a man but leaning forward and swinging [its] arms." Bigfoot? Maybe.

And that is merely the tip of the eerie iceberg, as I know, having lived in Texas for almost two decades.