The Changing Appearance of the UFO

For most people, any mention of the term "UFO" inevitably conjures up imagery of all-things airborne and saucer-shaped. In reality, however, unidentified flying objects come in a dizzying array of shapes – and have done so for decades. In other words, the classic Flying Saucer is merely one facet of an infinitely larger puzzle, as will now become graphically apparent. On numerous occasions throughout the latter stages of the Second World War, military pilots from Britain, Germany, Japan, Poland, and the United States reported seeing strange, seemingly intelligently-controlled, aerial globes of light that furiously pursued their aircraft, and at times even engaged in dogfights with the mystified aircrews. They were the Foo Fighters.

A Royal Air Force report of 3 February 1944, from the crew of a Lancaster bomber, describes a typical encounter: "It was a ball of red fire on port side 2 miles away at same height with yellowish red flame coming out behind and black smoke. It was 30/40 mph faster than the Lancaster. It went like this for a period of ¾ to 1 minute. It did not explode at any time. Fizzled out and not seen again. The smoke was very black and showed up well against grayish night background. It followed when Lancaster went into a dive and again on corkscrewing. It seemed to go out once but sprang into life again when Lancaster changed from dive to starboard into a corkscrew."

As the following statement – extracted from an article that appeared in the 13 December 1944 issue of the South Wales Argus newspaper - makes clear, initial theories were focused upon the idea that the Foo Fighters were the work of the Nazis: "The Germans have produced a “secret” weapon in keeping with the Christmas season. The new device, which is apparently an air defense weapon, resembles the glass balls which adorn Christmas trees. They have been seen hanging in the air and are apparently transparent."Problematic with the theory that the Foo Fighters were weapons of the Nazis, however, is the revelation that Hitler’s minions were having their own encounters with such objects, and assumed that Allied forces were responsible for their creation! Needless to say, the matter was never fully resolved and the Foo Fighters ultimately vanished as mysteriously and as quickly as they had first appeared.

The Ghost Rockets were curious missile-like objects that were predominantly seen in Scandinavian skies in 1946: one year after the Foo Fighters vanished, and only twelve months before the Flying Saucer burst forth onto the world’s stage. Astonishingly, somewhere in the region of two thousand sightings were made between May and December of that year, with August 9 and August 11 seeing the largest volume of encounters – including some that were corroborated on radar.

Interestingly, the August 1946 encounters fell directly within the peak of the annual Perseid meteor-shower. Problematic when it comes to dismissing the whole affair as a case of mistaken identity, however, is the fact that most of the Ghost Rocket incidents fell firmly outside of the time-frame of the Perseid shower. And the fact that some of the witnesses reported seeing the devices changing direction in the sky would seem to effectively eliminate meteors as the culprits.

Another conventional theory addressed at the time was the possibility that the Ghost Rockets were the work of the Russians, who were capitalizing upon the rocket research of German scientists stationed at Peenemünde in the 1940s. It is a historical fact that a number of such scientists were indeed employed by the Russians after the defeat of Nazi Germany, and did expand upon the work that had led to the production of the deadly V-1 and V-2’s that caused considerable damage to the British Isles during the War. As a result of this potentially worrying scenario, the Swedish military quickly issued a directive requesting that newspapers not report on the estimated speeds of the objects, or their trajectories; since this information would be vital to those test-flying the machines. 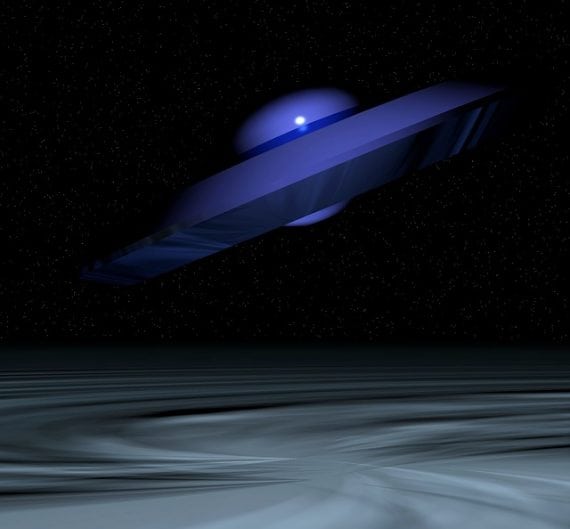 The saga of the Flying Saucer began with the pilot Kenneth Arnold, whose 24 June 1947 encounter at the Cascade Mountains, Washington State, kicked off the modern era of UFO sightings. At approximately 3.00 p.m. on the afternoon in question, Arnold was searching for an aircraft that had reportedly crashed on the southwest side of Mt. Rainier. At the time of its occurrence, Arnold’s encounter attracted the keen interest of not just the public and the media, but also that of the all-powerful Federal Bureau of Investigation. The following is a verbatim statement made by Arnold himself, and taken from previously Secret FBI records of 1947:

"I hadn’t flown more than two or three minutes on my course when a bright flash reflected on my airplane. It startled me as I thought I was too close to some other aircraft. I looked every place in the sky and couldn’t find where the reflection had come from until I looked to the left and the north of Mt. Rainier, where I observed a chain of nine peculiar looking aircraft flying from north to south at approximately 9,500 feet elevation and going, seemingly, in a definite direction of about 170 degrees."

Arnold stressed that the objects were approaching Mt. Rainier very rapidly and he was puzzled by their physical appearance: "I thought it was very peculiar that I couldn’t find their tails but assumed they were some type of jet plane. The more I observed these objects, the more upset I became, as I am accustomed and familiar with most all objects flying whether I am close to the ground or at higher altitudes. The chain of these saucer-like objects [was] at least five miles long. I felt confident after I would land there would be some explanation of what I saw [sic]."

And from that day forth, the world was forever changed: that most mysterious of all aerial intruders, the Flying Saucer, was well and truly born. For the next three decades, countless sightings of such objects were reported all across the planet; making the subject truly one of global proportions. In the 1980s, however, the Flying Saucer was firmly elbowed out of the picture by a new player in town: the Flying Triangle. 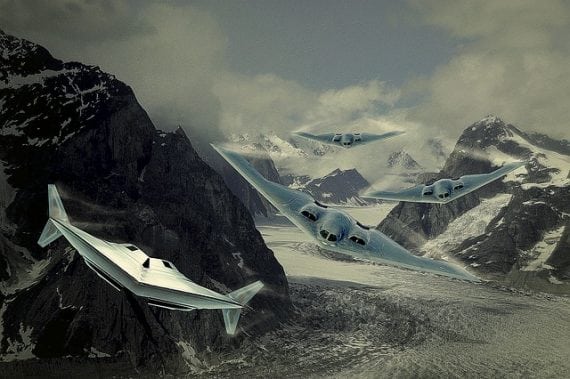 For more than two decades, sightings of large, triangular-shaped UFOs, usually described as being black in color, very often with rounded – rather than angled - corners, and that make a low humming noise, have been reported throughout the world. he sheer proliferation of such reports has led some ufological commentators to suspect that the so-called Flying Triangles are prime examples of still-classified aircraft, the development of which was secretly begun in the 1980s by elements of the United States’ Department of Defense and Air Force. Not everyone is so sure that this particular theory has merit to it, however. Consider the following.

On the night of 31 March 1993, an event occurred that was personally investigated by the Ministry of Defense’s then-UFO-investigator, Nick Pope. Reportedly, it involved the sighting of a huge Flying Triangle seen in the early hours of the morning in the direct vicinity of RAF Shawbury, Shropshire. Pope was able to speak with the chief witness to the Flying Triangle – namely, the Meteorological Officer at Shawbury – and offers his recollections on the intriguing conversation:

"Military officers are very good at gauging sizes of aircraft and they’re very precise. His quote to me was that the UFO’s size was midway between that of a C-130 Hercules and a Boeing 747 Jumbo Jet." Pope continues: "He had eight years worth of experience with the Royal Air Force; and a Met. Officer is generally much better qualified than most for looking at things in the night sky. And there were other factors too: he heard this most unpleasant low-frequency hum, and saw the craft fire a beam of light down to the ground. He felt that it was something like a laser beam or a searchlight. The light was tracking very rapidly back and forth and sweeping one of the fields adjacent to the base. He also said – and he admitted this was speculation – that it was as if the UFO was looking for something.

"The speed of the UFO was extremely slow – no more than twenty or thirty miles per hour, which in itself is quite extraordinary. As far as the description is concerned, he said that it was fairly featureless - a sort of flat, triangular-shaped craft, or possibly a bit more diamond-shaped. He also said that the beam of light retracted into the craft, which then seemed to gain a little bit of height. But then, in an absolute instant, the UFO moved from a speed of about twenty or thirty miles per hour to a speed of several hundreds of miles per hour – if not thousands. It just suddenly moved off to the horizon and then out of sight in no more than a second or so."

Although the Flying Saucers, Ghost Rockets, Flying Triangles and Foo Fighters are all integral parts of the UFO puzzle, long before each and every one of them appeared in our skies, there was yet another unknown, aerial intruder whose presence still creates controversy to this day: the Phantom Airship. Very much the product of the latter years of the 19th Century, the Phantom Airships were, as their name suggests, often Zeppelin-like devices that were seen on countless occasions during the years in question; and particularly so in the night-skies of the United States. 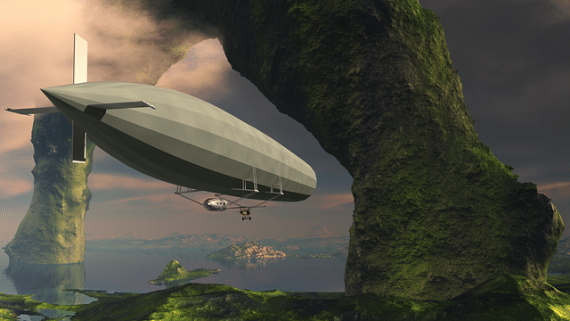 Interestingly, even back then, theories abounded that the Airships were piloted by extra-terrestrials. For example, in 1897, none other than the Washington Times reported on the theory that the mysterious vehicles represented "a reconnoitering party from Mars." Similarly, in the same time frame, the Saint Louis Post-Dispatch speculated that "these may be visitors from Mars, fearful, at the last, of invading the planet they have been seeking."

One of the most famous – or, rather, infamous – incidents of the Phantom Airship variety allegedly occurred at the little Texas town of Aurora on 17 April 1897. So the wild story goes, on the day in question, an Airship slammed into a windmill owned by a local man, Judge J.S. Proctor, practically destroying the craft, and killing its diminutive alien pilot. Strange wreckage, described as being a combination of aluminum and silver, and adorned with hieroglyphics, was rumored to have been scooped up by the locals, and the body of the alien visitor was said to have been buried in the local cemetery. Whether true, a hoax, a practical joke, or something else, the town of Aurora still to this day attracts those curious about this early Roswell-style event.

Quite clearly, UFOs are forever changing. While we could speculate endlessly upon the issue of what type of UFO will one day replace the now-ubiquitous Flying Triangle, only the intelligence behind the phenomenon know the answer to that intriguing question.

Want Nightmares? Try Sleeping on Your Left Side