The Government’s Files on the Men in Black

Does the U.S. Government have files on the Men in Black? Well, yes, to a degree. One example of more than a few revolves around the two men who, more than any others, brought the phenomenon to the attention of the UFO research community and to the public - and also to none other than the FBI. They were Gray Barker and Albert Bender. In 1956, Barker wrote a book about Bender's MIB experiences, titled They Knew Too Much About Flying Saucers. Then, in 1962, Barker published Bender's own book on the MIB, Flying saucers and the Three Men. Both men caught the attention of the FBI.

On 28 August 1953, an agent of the FBI visited Gray Barker and asked him a number of questions concerning Albert Bender’s International Flying Saucer Bureau. It turns out that Bender had mailed to Barker a package of business cards that he had printed identifying Barker as "Chief Investigator" for the International Flying Saucer Bureau. In the pages of They Knew Too Much About Flying Saucers, Barker admitted having given "four or five [of the cards] to close friends, who still had them when I checked with them one week later." It was therefore something of a surprise when the FBI turned up on Barker’s doorstep with one of the aforementioned business cards and asking probing questions. "I have always been puzzled about how the Federal Bureau of Investigation got hold of one of them," Barker later said. 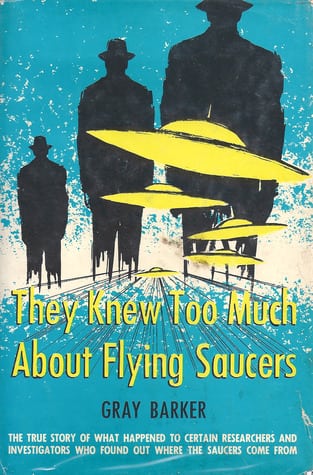 "What’s this all about?" asked the agent, sternly. Somewhat nervously, a fidgeting and sweaty Barker explained that the IFSB was simply an organization formed to investigate "flying saucer phenomena" and that the business cards were simply a means by which IFSB investigators could be identified. The FBI man then proceeded to ask Barker if he knew of a certain individual, whose name Barker could not later recall but who lived in Florida. Barker replied that he did not. This then prompted the agent to advise Barker that the man had suffered an epileptic fit and had been taken to the nearby St Mary’s Hospital. Contained within his belongings was one of Bender’s IFSB cards. By now satisfied that Barker was not acquainted with the man in question, the FBI agent merely thanked him and departed as mysteriously as he had arrived.

"Then it struck me," recalled Barker. "How in the world had anyone from Florida come into possession of one of my business cards?" As Barker told his readers, he began to seriously wonder if there really had been an epileptic man, or if this had simply been a very clever ruse to allow the FBI to covertly check out Barker, Bender, the IFSB and the story of Bender’s experience with the Men in Black. Barker voiced all of these concerns and suspicions in a lengthy report to Bender, who quickly wrote back: "I cannot for the life of me see why [the FBI] would be checking up. It certainly proves one thing – the government is more interested in the Saucers than we realize."

Half a decade later, Barker and Bender - and their deep links to the mysterious Men in Black - were once again the subjects of FBI interest. On 22 November 1958, an inquiring citizen of Oklahoma City contacted J. Edgar Hoover about the FBI and the MIB. The letter-writer said: "Recently many rumors have been printed in UFO periodicals, concerning reports that Special Agents of the Federal Bureau of Investigation have discouraged certain saucer investigators, particularly Mr. Albert Bender of Bridgeport, Connecticut, from further research into the secret of these elusive discs. Since you are the Director of the FBI, I would like to know whether or not these reports are factual or whether they are just rumors."

Hoover’s response to the letter-writer was swift: "I am instructing a Special Agent of our Oklahoma City Office to contact you concerning the matter you mentioned." A note from Hoover to the special agent in charge at Oklahoma City added: "An agent of your office should contact [the letter writer] immediately and secure copies of or information concerning the periodicals described."

In a memorandum to Hoover dated 9 December 1958, the Oklahoma office of the FBI reported that the periodical in question was titled the Saucerian Bulletin and was published by Gray Barker. The FBI further noted for Hoover’s attention that the Saucerian Bulletin reported that the three men responsible for silencing Albert Bender were from "the FBI, Air Force Intelligence, and the Central Intelligence Agency." An FBI report of 12 December reads as follows: "Bender formed the International Flying Saucer Bureau in Bridgeport, Connecticut, in 1952 to look into the flying saucer mystery. In 1953 Bender allegedly stated that he knew what the saucers are. Then 'three men in black suits' silenced Bender to the extent that even today Bender will not discuss the matter of his 'hush-up' with anyone."

A month later, on 22 January 1959, Hoover was still on the trail of Barker, Bender and the Men in Black and wrote in a memorandum to one of his special agents: "The Bureau desires to obtain a copy of the book written by Gray Barker entitled They Knew Too Much About Flying Saucers. Reportedly, the book was published by University Books, Inc., Illinois. Contact this publishing house and if possible, obtain a copy of this book."

Three weeks later, a copy of Barker’s book was in Hoover’s very own hands, as were all available copies of Bender’s Space Review magazine. The FBI subsequently noted that its files contained "no information pertaining to the hush-up of Bender." On the subject of his Space Review journal the FBI noted: "This magazine contains numerous articles and squibs concerning the sighting of flying saucers throughout the world. It does not appear to have any security significance."

This demonstrates that whoever Bender’s mysterious black-garbed visitors were, they were not FBI agents. It is highly curious to note, however, that nowhere in the declassified papers is there any mention of the FBI’s 1953 interview with Gray Barker. Was this simply an off-the-record interview? We may never know for certain. Bender quit Ufology in the 1960s. As for Barker, he continued to both write and publish - and up until the time of his death in 1984.

Psychologists Say Humans and ETs Will Get Along Just Fine