The Multiple Mysteries of Rendlesham Forest

Any mention of the mysterious locale that is Rendlesham Forest, Suffolk, England inevitably conjures up strange and surreal images of the famous UFO landing within the forest in the latter part of December 1980 – a startling event witnessed by numerous United States Air Force personnel stationed at a nearby military base: Royal Air Force Bentwaters. The bizarre affair has been the subject of a considerable number of books, numerous televisions shows, several investigations by military and governmental bodies, and unrelenting debate. Reports of strange lights, of small alien-like creatures seen deep within the heart of the woods, and of high-level cover-ups and sinister conspiracies, are all key ingredients of the case that - for many - has become known as the "British Roswell." 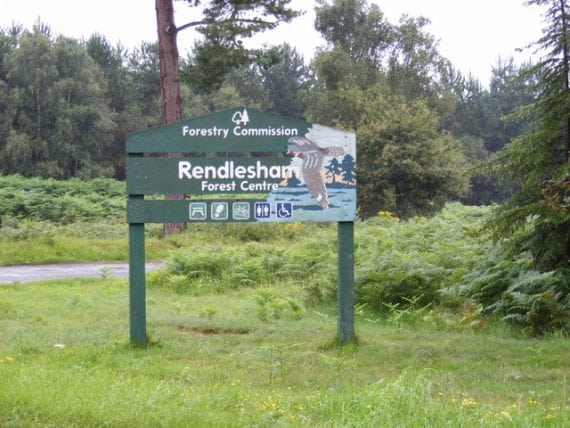 Almost forty years on, the events in question continue to provoke intense debate and controversy, with some believing that extraterrestrials really did land on British soil on that fateful night. Others hold the view that everything can be attributed to mistaken identity (of a lighthouse, no less...). Others prefer the theory that a dark and dubious military experiment, and subsequent mishap, may have been to blame for all of the fuss. Whatever the truth of the affair, the debate continues to rage. And, doubtless, it will continue to rage for many more years to come.

Rendlesham Forest covers an area that is around 1,500 hectares in size and can be found in Suffolk’s coastal belt known as the Sandlings. It is comprised of large, coniferous trees, as well as heath land and wet land areas; and is home to the badger, the fox, the red deer, the roe deer and the fallow deer. According to some people, however, Rendlesham Forest is home to far stranger things, too.

In his authoritative book Explore Phantom Black Dogs, Bob Trubshaw recorded that: "The folklore of phantom black dogs is known throughout the British Isles. From the Black Shuck of East Anglia to the Mauthe Dhoog of the Isle of Man there are tales of huge spectral hounds 'darker than the night sky' with eyes 'glowing red as burning coal.' The phantom black dog of British and Irish folklore, which often forewarns of death, is part of a world-wide belief that dogs are sensitive to spirits and the approach of death, and keep watch over the dead and dying. North European and Scandinavian myths dating back to the Iron Age depict dogs as corpse eaters and the guardians of the roads to hell. Medieval folklore includes a variety of 'Devil dogs' and spectral hounds." 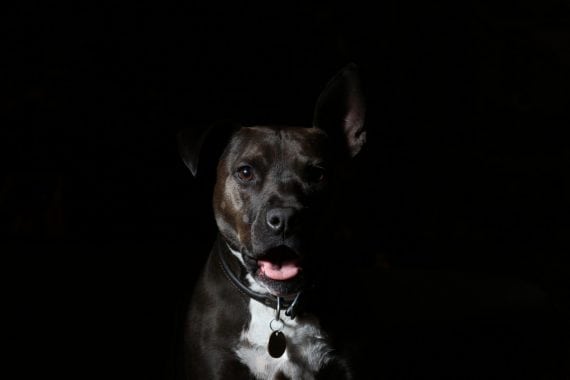 Although the image that the phantom black dog creates is one of a deadly and devilish beast that prowled the villages and towns of old England centuries ago, it is a little known fact outside of students of the phenomenon that occasional sightings of such creatures continue to surface to this very day - and from deep within Rendlesham Forest, no less. On a cold winter’s afternoon in 1983, for example, the soon-to-be-married Paul and Jane Jennings were blissfully strolling through the woods of Rendlesham when they were terrified by the sudden manifestation in front of them of what Jane would describe succinctly as "a big black dog." She elaborated that the pair had been walking along a pathway when, on rounding a bend, they came face to face with the phantom beast – something that prompted Jane to intriguingly add: "It was almost like it was waiting for us."

Reportedly, the beast’s head was clearly canine in appearance, albeit much larger than that of any normal dog. Yet, somewhat curiously, its body seemed to exhibit characteristics that were distinctly feline-like in nature. For a brief and tense moment girlfriend and boyfriend stared at the creature, which, they recalled, seemed to have an eerily mournful expression upon its face. Far more shocking, however, was what happened next. Suddenly, the beast began to flicker on and off for four or five times, then finally vanished, literally, before the Jennings’ eyes amid an overwhelming smell that reminded the pair of burning metal. Not surprisingly, the terrified couple fled for the safety of their car and quickly left the area.

Rendlesham Forest, as well as the Suffolk locales of West Wratting and Balsham, is reportedly home to an even more diabolical beast than the phantom black dog. It is a creature that has come to be known locally as the Shug-Monkey. Described as being a bizarre combination of giant dog and large ape, the creature is said to strike deep terror into the hearts of those souls unfortunate enough to cross its path – which is something that the late Sam Holland attested to. Shortly after New Year’s Day in 1956, Holland was walking through the woods with his spaniel dog, Harry, when he was horrified to see a bizarre-looking creature come looming out of the trees some forty feet in front of him. It walked upon four huge, muscular legs – "like a lion’s" – and its thick fur coat was both black and glossy. Incredibly, said Holland, the animal was easily ten feet in length; and so could not be considered anything even remotely resembling a domestic animal, or a known wild beast of the British Isles. 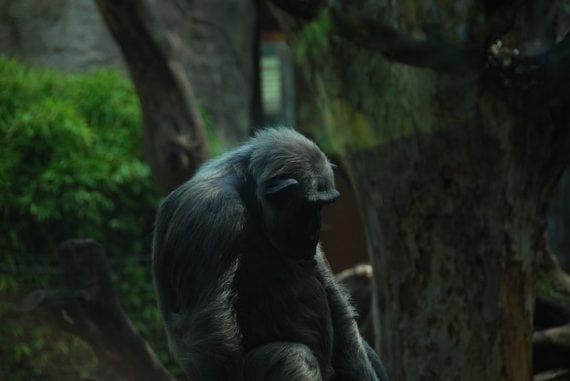 Holland recalled thinking for a moment that perhaps the animal was an exotic big cat that had escaped from a zoo or private estate; that is until it turned in his direction and he was finally able to see its terrible face. Likening it to that of a sliver-back gorilla, Holland said that the monstrous creature possessed a huge neck, widely flaring nostrils, and immense, powerful-looking jaws. For a moment or two, the animal looked intently at Holland and his whimpering little dog; then, seemingly losing interest, continued on its way and into the depths of the surrounding undergrowth. Holland would later explain that the creature looked like a strange combination of ape, dog, lion and rhinoceros. Needless to say, the British Isles is not home to any such animal that even remotely resembles the beast that Sam Holland says he stumbled upon. Yet he is adamant that his description of the monstrous entity and his recollections of the day in question are utterly accurate. Holland believed that whatever it was that he had the misfortune to run into half a century ago, it was unquestionably paranormal rather than physical in origin. But from where, precisely, he had no idea.

Rendlesham has also been the site of several intriguing encounters with what have become known as "Alien Big Cats"- or ABC’s. The infamous beast of Bodmin is perhaps more well-known than its Suffolk-based cousins; however, the reports that have surfaced from in and around Rendlesham Forest are certainly no less provocative in nature. One of the earliest, credible cases on record is that of Jimmy Freeman, whose close encounter with a big cat occurred while driving past Rendlesham Forest late one night in the mid-1970s. While the precise date has been lost to the inevitable fog of time, the details are as fresh in the mind of Freeman today as they were on the night the incident occurred.

Given the fact that the encounter had occurred around 11.15 to 11.30 on what was a dark, cloudy and slightly misty night, Freeman was driving slowly and had his lights on full-beam as he negotiated the dark and winding roads. As a result, when something large and shadowy charged across the road in front of him, Freeman could not fail to see the creature for what it was. Long, sleek and utterly black in color, Freeman is in no doubt that for a split second or two he had a brief sighting of a huge cat. Today, he says firmly: "If I live to be a hundred, I will tell the same: Rendlesham Forest has big cats."

On an eerily similar path, in October 2003, it was reported that a woman named June Fooks, of Eyck, near Woodbridge – which is on the doorstep of Rendlesham Forest – had seen "a black feline" in her garden that was "bigger than her pet Labrador." She recalled: "It all happened in a matter of seconds, but I got a really good look at it. The sun was setting, and it was shining right on it. It had a really shiny coat and a big tail. It saw me and then slinked off into the hedge." Interestingly, it transpired that a neighbor of June Fooks – Anne Downing – had seen a similar creature in Rendlesham Forest around eighteen months previously. She explained: "I was coming along a pathway with my daughter and saw this black animal in the distance. It was almost in a pouncing position and, when we got too near, it simply fled into the bush." 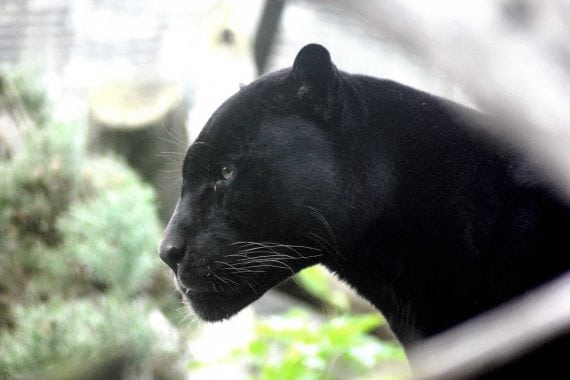 It is ironic that those who are skeptical of the Rendlesham Forest UFO case of December 1980 suggest that the airmen who were involved merely mistook the illumination from the nearby Orford Lighthouse for something more exotic. Why? Well, Orford itself is a veritable hotbed of weirdness and wild creatures. Consider, for example, the following account of Ralph of Coggershall. Recorded in the year 1200 in Chronicon Anglicanum, it describes the remarkable capture in the area of a wild-man-of-the-woods-style creature:

"In the time of King Henry II, when Bartholomew de Glanville was in charge of the castle at Orford, it happened that some fishermen fishing in the sea there caught in their nets a Wildman. He was naked and was like a man in all his members, covered with hair and with a long shaggy beard. He eagerly ate whatever was brought to him, but if it was raw he pressed it between his hands until all the juice was expelled. He would no talk, even when tortured and hung up by his feet, Brought into church, he showed no sign of reverence or belief. He sought his bed at sunset and always remained there until sunrise. He was allowed to go into the sea, strongly guarded with three lines of nets, but he dived under the nets and came up again and again. Eventually he came back of his own free will. But later on he escaped and was never seen again."

As all of the above demonstrates, while Rendlesham Forest is most associated with the UFO-themed events of December 1980, when you look closer you see that the forest has been a hotbed of weirdness for not just years or decades, but for centuries. One of John Keel's "window areas," perhaps.

Global Survey Finds the Majority of Humanity Believes in Aliens