For centuries tales have circulated concerning children brought up in the wild by animals such as wolves, apes and even sheep. Many have been found to be apocryphal or outright hoaxes. A number of such accounts, however, continue to intrigue. They indicate that, just possibly, people can be raised in - or revert to - a distinctly wild form of lifestyle. Sir Kenelm Digby, one of the Royal Society’s founders, was the first to mention the case of Jean de Liège, in 1644, having interviewed at length those who had met the boy a few years earlier.

As a child living in Belgium, and during a period of warfare, Jean took to the woods with fellow villagers. When the fighting moved elsewhere, the villagers returned home; however, Jean remained in hiding and out of human contact for approximately sixteen years. In the wild, his senses supposedly sharpened to an astonishing degree. He could smell “wholesome fruits or roots” at an incredible distance. And when he was captured at the age of about twenty-one, he was “all overgrown with hair,” and incapable of speech. Later, after having been placed into human society, he reportedly learned to talk. It's highly unlikely, though, that living in the wild would cause a person to become "overgrown" with hair. In fact, there is no evidence to suggest that such a thing could happen. Nevertheless, that aspect of the saga continues to persist. Perhaps, in view of that unlikely angle, this is a distorted tale of a child with hypertrichosis, a rare condition which can cause the body and face to become covered in hair. 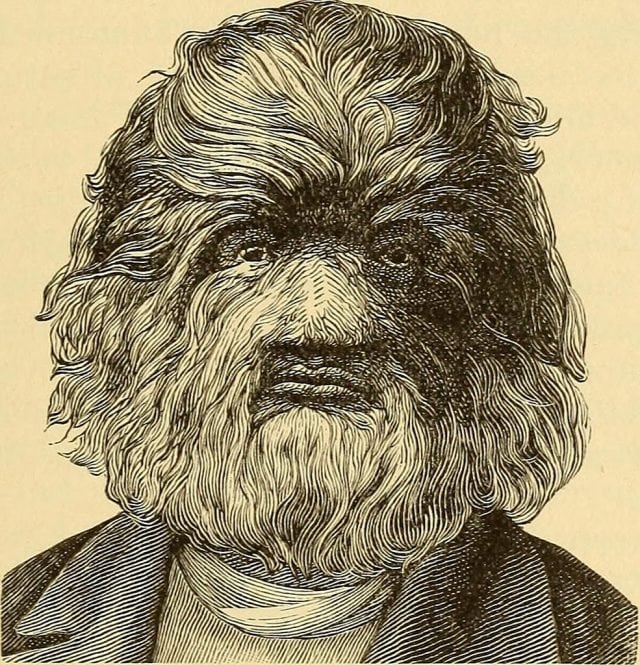 Similarly, Nicholas Tulp, a doctor from the Netherlands, described an Irish “sheep-boy” in 1672. “There was brought to Amsterdam a youth of 16 years, who being lost perhaps by his parents and brought up from his cradle amongst the wild sheep of Ireland, had acquired a sort of ovine nature,” recorded Tulp. “He was rapid in body, nimble of foot, of fierce countenance, firm flesh, scorched skin, rigid limbs, with retreating and depressed forehead, rude, rash, ignorant of fear, and destitute of all softness; in other respects sound and in good health. Being without human voice he bleated like a sheep, and being averse to the food and drink we are accustomed to, he chewed grass only and hay, and that with the same choice as the most particular sheep.”

In the United States, according to legend, in the early part of the nineteenth century a “Wolf Girl” roamed the banks of the Devil’s River near Del Rio, southwest Texas. The girl’s mother had died in childbirth, and her father, John Dent, was killed in a thunderstorm while riding for help. “The child was never found, and the presumption was that she had been eaten by wolves near the Dents’ isolated cabin,” wrote Barry Lopez in his book Of Wolves and Men. Lopez said that a boy living at San Felipe Springs in 1845 had reported seeing several wolves and “a creature, with long hair covering its features, that looked like a naked girl,” attacking a herd of goats.

A hunt commenced and on the third day the girl was duly cornered in a canyon. A wolf with her was driven off and finally shot when it attacked the hunting party. The girl was then bound and taken to the nearest ranch, where she was untied and locked in a room. That evening, however, a large number of wolves, apparently attracted by the girl’s loud, mournful and incessant howling, approached the ranch. The domestic stock subsequently panicked, and in the confusion the girl succeeding in making good her escape.

According to Lopez, the girl vanished for seven years. In 1852, a surveying crew exploring a new route to El Paso allegedly saw her on a sandbar on the Rio Grande, far above its confluence with Devil’s River. “She was with two pups. After that, she was never seen again.”

Do such “humanimals” still roam the darker corners of the United States and elsewhere? Perhaps, based upon the accounts cited above, we would be wise to keep an open mind on that particularly controversial question. The wild ones may still be with us.