Area 51’s Secret Airline is Looking for a Flight Attendant

Reports to Operations one (1) hour before scheduled flight or as otherwise assigned by supervisor.

Wait, what? That sounds like the typical job description of a typical flight attendant. However, Janet is anything but typical, which explains that last qualification. Are you interested in flying in and out of Area 51? Are you willing to serve coffee to any passenger – no matter how many arms they have or how big their heads are? Can you keep your big mouth shut about it? Janet is looking for you. 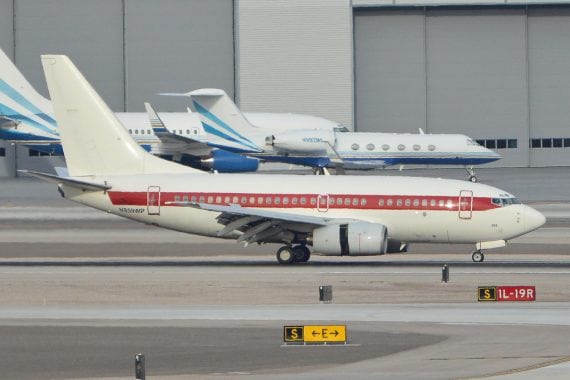 As anyone who knows anything about Area 51 will tell you, Janet is a mysterious airline operating out of a terminal at Las Vegas' McCarran International Airport that is rumored to fly military and contract employees to the Nevada National Security Site (home of Area 51), and other secretive sites, including Edwards Air Force Base (California), Hill Air Force Base (Utah) and Wright-Patterson Air Force Base (Ohio).  Anyone asking questions about it is jokingly (and occasionally nervously) told Janet stands for "Just Another Non-Existent Terminal." It has six Boeing 737-600s painted white with a red stripe and five executive turboprops painted white with blue stripes.

That’s it. Nothing else to see here. Move along. Any more questions and those men over their in black with the blue gloves will see you in that small room to the right that no one ever comes out of.

Well, that’s normally the case when you try to dig deeper into this airline. However, Janet has opened itself up for scrutiny with the flight attendant job posting on the website of AECOM, the defense contractor which operates it.

That sounds like a nice place to work, especially if you like living in Las Vegas where all Janet employees are allegedly based. The duties sound like those of flight attendants at any other airline: ensures security practices and procedures are followed; provide leadership, direction, and assistance during an emergency, including aircraft evacuation; assist and administer first aid to ill or incapacitated passengers or crew members; push heavy doors weighing up to 80 pounds; possess a current state driver’s license.

And then there’s the big one: Active Top Secret Clearance Highly Desired.

That’s not easy to get. A person cannot apply for it – the application must come from a current or prospective employer. The process can take up to two years due to the high number of background checks required. Individuals with Top Secret Clearance are assumed to have access to information or material that could be expected to cause “exceptionally grave damage to national security if it was released without authorization.” The clearance must be reinvestigated every five years.

Does this job sound like something more than checking seat belts. Closing overhead doors and passing out pretzels?

If you think you can handle it, applications are now being taken. Whatever you do, don’t say you got the information from me.

A Strange Hall Of Mysterious Mirrors