Dan Aykroyd, UFOs, and the Men in Black

There are many facets of the UFO phenomenon, and many types of witnesses who have come forward with their own extraordinary tales. These often get lost in the deluge of such reports and indeed rantings, but sometimes there is a well-know and beloved celebrity who will come forward with their own accounts, theories, and experiences. These particular witnesses and spokespeople have a way of making people listen, somewhat reinvigorating the UFO debate in the process, and certainly one of the most vocal and well-known of these is none other than the popular Canadian-American actor, comedian, producer, screenwriter, musician and businessman Dan Ackroyd. Getting his start on the hit sketch comedy show Saturday Night Live and going on to star in such beloved classics as Ghostbusters, Aykroyd is a well-known name to many people. He also just happens to be a major proponent and researcher of UFOs with some truly bizarre tales to tell.

Dan Aykroyd has never been shy about his intense interest in UFOs, and this seems to be a fascination that reaches all the way back into his childhood. The actor was fist enamored with the phenomenon when he saw a photo of mysterious lights over Capitol Hill from all the way back in 1952, an incident in which fighter planes had apparently been scrambled to chase the fast-moving objects off. This interest was only strengthened when he saw the classic sci-fi film The Day the Earth Stood Still, which he saw as a perfectly plausible scenario. Aykroyd would have the first of his own many close encounters with UFOs in the mid-1980s in upstate New York, when he claims that he woke up in the middle of the night in a panic and told his wife, “They are calling me, I want to go outside.”

Aykroyd would go on to become a fairly hard-core proponent of UFOs, and he would eventually make a documentary on his interests, called Dan Aykroyd Unplugged on UFOs, in 2005, and he even served for several years as the official Hollywood representative of the Mutual UFO Network (MUFON), and he has accrued a vast knowledge of UFO research and lore over the years that would put most UFOlogists to shame. In April of 2010, Aykroyd appeared on the well-known TV show Larry King Live, where the topic was UFOs and Aykroyd appeared as a pro-UFO representative in the debate, among a panel of scientists who had been brought together to discuss the physicist Stephen Hawking’s assertion that any aliens coming from the stars would be certainly malevolent. Aykroyd shared some famous cases of UFO abductions, such as those of Travis Walton and Betty and Barney Hill, and on the show he stated:

They are here, science should accept that they are here and look how they have come from a billion years in the future or the next dimension or wherever they are coming from. They have abducted people. 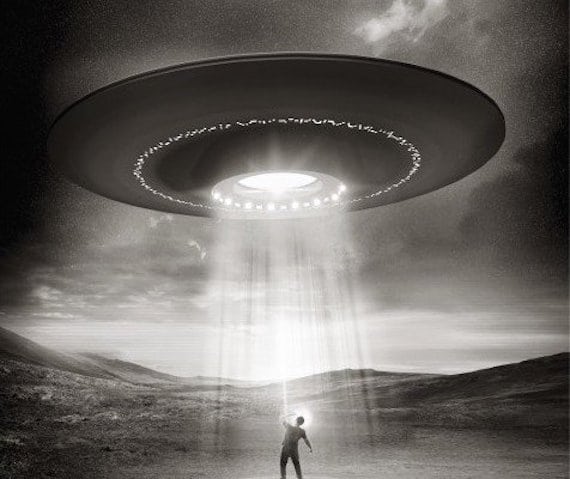 Aykroyd has appeared on other shows about his UFO beliefs, such as a 2015 episode of The HuffPost Show with host Marc Lamont Hill, where the topic turned to the strange and he talked candidly about the U.S. Air Force’s UFO alleged cover-up and some details about his own personal UFO sightings. When asked if he truly believed in UFOs, Aykroyd answered:

I do, absolutely, and I'm not alone. I have seen four, and I can’t say that they are alien craft and neither can the Air Force. The Air Force has been very interested in this. They don’t deny the existence of these hyperdynamic, super aerodynamic craft. They don’t deny. Their anguish comes in that they can’t tell you. They want to tell you anything but that they are extraterrestrial. Any excuse at all, even if they are unknown or unsolved. The Air Force cannot just come out and admit that there are extraterrestrial beings far in advanced of our culture that have built these machines. They are very interested in what is going on, but like us, they don’t know. I believe that there are probably many species coming and going and that the Air Force is very interested, but they can’t come out and say. Because then you’re going to go, ‘well wait a minute, the parish priest, the cop on the street, the President — you don’t got the power. They’ve got the power!’ You'd have complete breakdown of society.

On the show, Aykroyd went on to give some further details into his own strange UFO sightings, saying:

Two specifically were definitely aerial constructs of some kind. One of them with a light, and one of them dull gray, and they were structures – one of them going very slow, one of them hovering over me. Then there were the two that my wife and friends and I saw – a high altitude sighting many years ago in Martha’s vineyard. Two flying side by side. They were at about 100,000 feet up, and they were going fast.

Aykroyd has also gone on and on about UFOs on his Facebook page, often referencing research and books and talking about his conspiratorial ideas about government cover-ups. He actively plugged the 2014 book The FBI-CIA-UFO Connection: The Hidden UFO Activities of USA Intelligence Agencies on his page, which goes over the vast research done on declassified documents by a physicist named Dr. Bruce Maccabee, who spent thirty-six years at the Naval Surface Warfare Center. Aykroyd would say in a Facebook post of the book thus:

Ex-Naval Surface Warfare employee and physicist Dr. Bruce Maccabee has assembled the most extensively and meticulously researched body of documentary evidence ever compiled on the U.S. government’s genuine interest in the UFO phenomena. The USAF has NEVER denied the existence of these super-performance aerodynamic vehicles. The Air Force’s continued anguish over PUBLIC disclosure is not due to the military’s genuinely admitted reality of these machines’ existence but due to the government’s struggle to categorize the phenomena as being ANYTHING but extra planetary in origin. 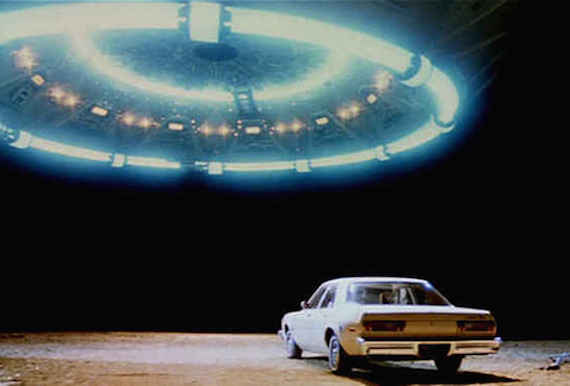 Aykroyd also continuously praises and supports the organization called Mutual UFO Network (Mufon), for which he served as a consultant for a few years, and of who which he has said:

Basically, [Mufon are] scientists from all kinds of disciplines that have formed this group to analyze what is real and what is a hoax. Now you could say every one of them is a fake - that footage of 200 whirling white dots in the sky, or the Phoenix Lights [a series of lights seen over Phoenix, Arizona, in 1997] - which 17,000 people saw - the Tinley Park sightings in Illinois, where whole suburbs saw these triangles and wedges go over at three miles an hour. Is it a mass hallucination? If so, why is it appearing on digital cameras and film? They're coming and going like taxis.

Although Aykroyd takes this research very seriously and can seemingly talk about it nonstop, he is still known to go off the deep end from time to time, to the point that even avid UFO fans might take pause, but which although fringe nevertheless seem just as well thought out as any other theories out there. When asked about why he thinks UFOs are here he has said:

There's that old theory that humankind and this planet were seen as the centre of the universe. That was thrown away - how could we be so presumptuous? Well, I subscribe to that. I think we are the centre of the universe and that is why they're coming. They're visiting because this is the planet that produced Picasso, the atom bomb, penicillin ... there are so many advances in science, art and culture. They have technology better than ours, but they didn't paint like Renoir, they don't dance like Mick Jagger, they don't write like Samuel Johnson or William Faulkner. They are envious of us. We have the most beautiful planet - the Rockies, the purple fields of the United States, the Lake District, the Pyrenees, the turquoise seas of the tropics. They don't have that. They may have gelatinous pools and crystal mountains and they've got the technology to flip from planet to planet or dimension to dimension but, you know, Keith Richards didn't come from there. I think there are possibly some hybrids here. I think many are here for good purposes and want to improve our planet but I think some are here for malevolent purposes. Probably extracting sperm and ova, or taking cow's lips and anuses for delicacies, being cruel to animals, that kind of thing.

Out of all of this, one of Aykroyd’s more bizarre tales is an incident in which he says he was confronted by the Men in Black, as he was talking to the singer Britney Spears of all people. Just before the cancellation of his TV show Out There, Aykroyd claims that he stepped out of the studio to take a call from Spears, who he had starred beside as her father in the film Crossroads. Britney Spears had called him to ask him to appear on Aykroyd’s old show Saturday Night Live with her, and as he talked he says he noticed a mysterious black car pull up on a nearby street. 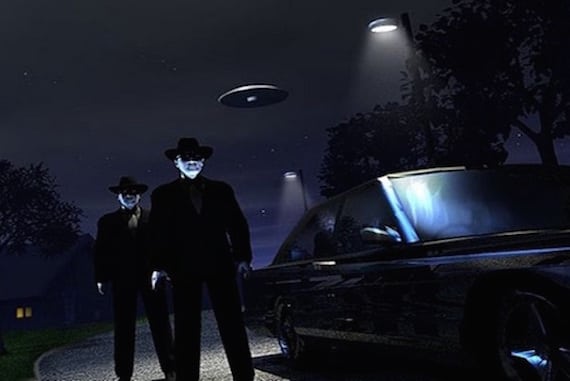 Out of the car purportedly stepped a “very tall,” pale man in a black suit, who gave him a “dirty look” before getting back into the vehicle and driving off. Oddly, the producers of the show Aykroyd was filming shortly after were told to stop shooting a show they were making about UFOs, specifically one in which they had been interviewing a Dr. Steven Greer, of the Disclosure Project, who was about to spill tons of testimony of UFO witnesses and supposed insider information. The show never made it to air. It is an odd account to be sure, and one wonders just what in the world was going on here.

It is clear that the comedy great and renowned actor Dan Aykroyd truly believes what he is saying and has the knowledge and conviction to back it up. He talks about it with such enthusiasm that it is difficult not to be somewhat drawn into his world. It may not mean that any of this is true, but it is curious how having some fame can bring one's views to the masses and get people thinking. The UFO debate has many players, theories, and directions it can go, and when a well-known celebrity opens up in the topic it tends to have wide-ranging effects. Whether any of what Dan Aykroyd says is true or not, it gives us something to think about, and is one more voice out in a sea of voices on the immortal topic of the UFO phenomenon.

Strange Object Passes Over Brazil and Lands in Peru