First Ship Landing on Europa Could Sink in Quicksand

Another staple of science fiction and horror movies may become a reality and could ruin any chance of humans landing a spacecraft – manned or otherwise – on the surface of Jupiter’s moon, Europa … one of the planetary bodies in the solar system that is considered capable of sustaining life forms. New research suggests that the surface of this moon is made of fine particles with a lot of air space in-between them. In other words, Europa appears to be covered with quicksand. Calling Indiana Jones!

Researcher at the Planetary Science Institute, led by senior scientist Robert Nelson, were studying the “photopolarimetric properties of bright particles that explain unusual negative polarization behavior at low phase angles observed for decades in association with atmosphereless bodies including asteroids 44 Nysa, 64 Angelina and the Galilean satellites Io, Europa and Ganymede” for a study published in Icarus. 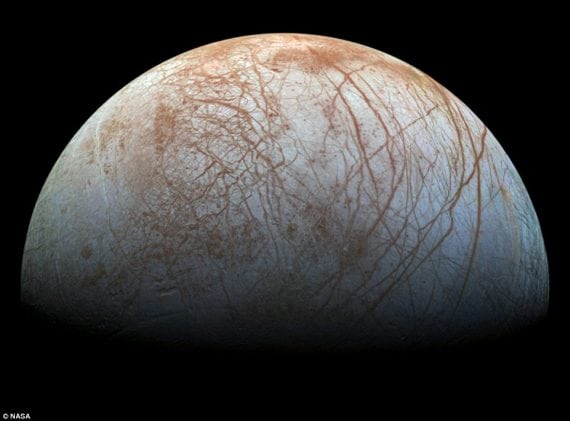 In simpler terms, the polarization of light reflected from a solar system object depends on the reflective material and on the geometry of the surface. The angle from the Sun to Europa to an observer on Earth is called the “phase angle” and any polarization having greater than a 20 degree phase angle is considered positive. It’s lower in Europa’s case, giving it negative polarization. What this means in even simpler terms is that the light reflected off of Europa indicates that its surface material is some sort of extremely fine-grained particles (a fraction of a micron), like fine powdered snow, with void space between them above 95 percent. That combination of fine particles and loose density is the formula for outer space quicksand.

Is this bad news? Fans of The Princess Bride, Indiana Jones and the Kingdom of the Crystal Skull, Blazing Saddles (movies with memorable quicksand scenes) and 1960s adventure movies (according to a survey by Slate, 3% of them showed someone sinking in quicksand or mud) know the answer. This will be bad news for the Europa Lander planned by NASA for a mission in 2024 … if this surface-skimming, photo-taking robot sinks, there won’t be a Doctor Jones or a fairy tale Giant to save it. 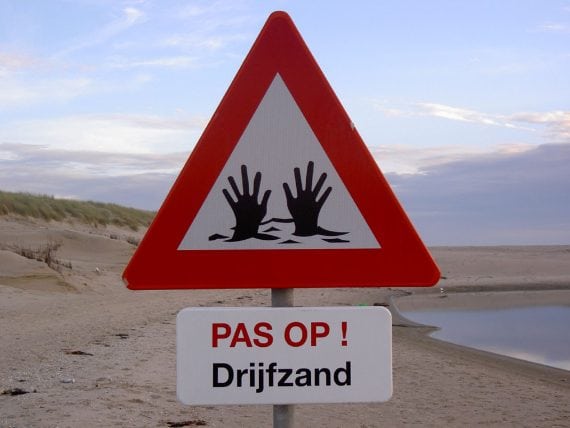 The good news is, science has proven that most movie quicksand is a myth … at least the part about getting sucked in over your head. It’s generally not that deep and you can get out by moving slowly or even by getting on your back and swimming. However, that’s quicksand on Earth. They don’t know yet what they’ll be dealing with on Europa nor if the surface is completely covered with it … that’s highly unlikely.

Quicksand on Europa adds another level of excitement to future missions to Europa … and a great plot line to sci-fi movies until we get there.

Mosquitoes Are Watching Us and Learning Our Ways