History is littered with amazing findings that have been lost to time and potential groundbreaking discoveries that have somehow fallen into the background. In the 1800s and early 1900s, there were supposedly some rather amazing such findings by a well-respected scientist, but which have nevertheless been downplayed or faded with time. It is a rather interesting historical journey by a man who may or may not have had a great impact on the field of cryptozoology and archaeology, but which is intriguing nevertheless.

Grafton Elliot Smith was born in 1871, and was an Australian-British anatomist, anthropologist, and archeologist specializing in the human and primate brain. Over his prestigious and illustrious career, he would be the first chairperson of anatomy at the Cairo School of Medicine, cataloging the brains of Egyptian mummies and the first to x-ray a mummy, Professor in anatomy in Manchester, the chair of Anatomy at the University College London, and President of the Anatomical Society of Great Britain and Ireland. He was also a Fellow of the Royal Society, and received the cross of the French Legion of Honor, the Royal Medal of the Royal Society, the Honorary Gold Medal of the Royal College of Surgeons, the Huxley Memorial Medal from the Royal Anthropological Institute of Great Britain and Ireland, and he was even knighted in 1934. Despite all of these achievements in the world of science and archeology, he was perhaps best known for his rather unorthodox and controversial theories on the origins of mankind, and his adherence to a theory known as Hyperdiffusionism.

Smith proposed that rather than Africa as the cradle of mankind, as was the general consensus, the human race had originated instead in Europe, descended from an ancient Mediterranean race. This theory was based on the rationale that mankind could not have become erect until the brain had developed to the point where the hands could be elaborately manipulated, and the remains of some of the largest brained human ancestors, including the Cro-magnon, had been found in Europe. This race he believed stretched out all over western Europe and into Egypt, with Egypt being of particular importance in Smith’s ideas on the origins of human civilization. Smith believed in the concept of “diffusionism,” which was the idea that all megalithic societies originated in Egypt, from which the people traveled forth into other areas, including Europe, influencing the neolithic culture of Europe, and that these new societies sought to emulate and imitate the culture of Egypt. Smith would say of this:

The earliest cultivators of the soil in Egypt were in fact laying the foundations not merely of agriculture and irrigation but of all the arts and craft, the social organization and religious beliefs which became an integral part of the civilization that was being built up sixty centuries ago and in later ages was diffused throughout the world.

Smith also believed that this drive to spread out was mainly fueled by the emerging science of metallurgy and the need for copper, a theory which was later expanded to include the hunt for precious stones and pearls as well. This theory was quite popular at the time because it offered a simple explanation for the spread of civilization from a single source rather than numerous autonomously developing cultures, making it attractive to archeologists, and it retained a decidedly Eurocentric slant. This was particularly true as there was a drive towards colonialism at the time, and hyperdiffusionism showed that culture and ideas could be spread throughout the world through colonies and missionaries.

In addition to helping to make these unorthodox theories more mainstream and more prominent in academic discourse, Smith also was very influential in developing ideas on the evolution of the primate brain, with brain evolution being one of his many specialties. In fact, at the time Smith was one of the world’s leading specialists on the evolution of the brain, and many of his ideas are still part of established theories today. Over the course of his career he would write hundreds of publications on the evolution of the brain, and carried out field work in addition to cataloguing the British Museum’s brain collection and acting as an archeological and anthropological advisor. During his years as a prominent specialist on brains, Smith came across many brains, in particular those of mummies, and one in particular stands out as being particularly bizarre.

In 1932, numerous newspaper articles made the rounds of the remains of an “ape man” that was allegedly retrieved from the rain forests of Sumatra and which was referred to as the Orang Letjo, and which most people know now as the Orang Pendek. The Orang Pendek is a cryptid that has long been reported from the remote mountainous jungles of the island of Sumatra, and is commonly described as a small hairy hominid standing between 80 and 150 cm (30 and 60 in) in height and covered with short, grey to reddish brown hair. The creature has long eluded all attempts to capture physical evidence, but if these news reports from 1932 are to be believed, then the prestigious Smith was actually witness to photographs of actual physical remains and perhaps even examined them himself.

In the 1 July 1932 edition of the Auckland Star, Volume LXIII, there is reported the story of a hunter who allegedly came across a mother Orang Pendek and its infant in the remote mountain wilderness of Sumatra. The mother reportedly escaped, moving off on two legs, and the baby was captured. It was described as being totally covered with hair and having no tail. Additionally it had arms that “do not hang to the knees like those of an ape,” and a skull that was “between that of an ape and a man.” The baby was carefully skinned and its remains were purportedly sent to Batavia Museum, where it was studied and photographed, with the photos sent to Holland as well. Smith made a statement on the find, saying:

Stories of ape men have been current since the time of Marco Polo. There is nothing inherently impossible, and some type of ape, with a human likeness, may have survived in the Sumatra forests, but Marco Polo's experience should be remembered. When he visited Sumatra he heard a similar story, and discovered a small, mummified ape, which people pretended was a human being.

Did Smith, who was a world leader in primate brains and evolution at the time, actually analyze this find? It certainly seems possible. Where are the remains that were reportedly found or indeed the alleged photos? It seems that this potentially groundbreaking find on the Orang Pendek has been lost to time and one wonders if the remains have been boxed up and hidden away in some dusty museum collection. Although Smith has been linked to complacency and somehow an accomplice in the Piltdown Man hoax of 1912, in which amateur archaeologist Charles Dawson claimed that he had discovered the "missing link" between ape and man in gravel beds near Piltdown, East Sussex, he was still considered at the top of his field and well-respected.

These would not be the only odd anthropological finds connected to Smith. 10 years before the news of the Orang Pendek was making the rounds, there was breaking news that Smith had found physical fossil evidence of some sort of large, man-like primate in America. One such news report was related in the 23 December 1922 edition of the New Zealand Herald, Volume LIX, Issue 18281, as well as various other publications such as the Illustrated London News of the same year, in which it is revealed that Smith appeared at a scientific meeting of the Zoological Society in London where he exhibited photographs and a cast of a fossil tooth, an upper molar to be exact, which he claimed was that of an unknown type of ape-like primate. The fossil was reportedly found by a Mr. Harold J. Cook in Nebraska among various other remains of extinct mammals from the Pliocene age. 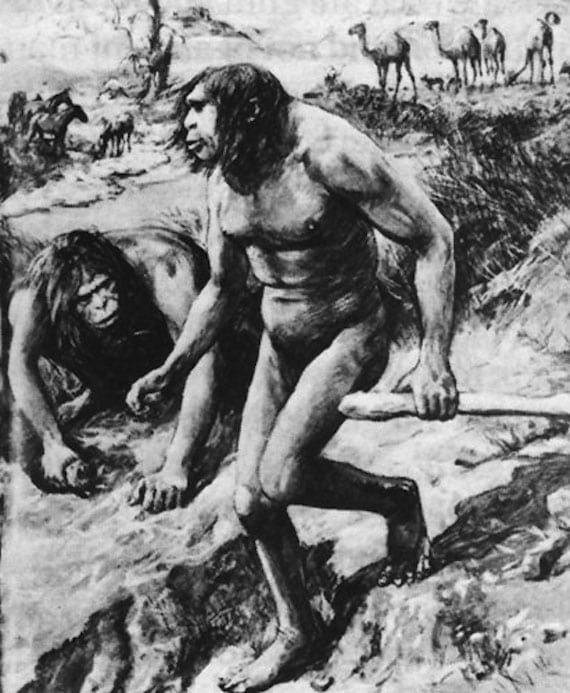 When the strange tooth was examined by other experts, such as one of the leading American paleontologists at the time, a Professor H. F. Osborn, it was stated that the tooth most certainly belonged to a primate, but from “neither an orang, gorilla, chimpanzee, nor any known race of extinct man or man-like ape,” a hypothetical creature which he called Hesperopithecus haroldcookii, but which he did not believe to be a true human ancestor, although probably closer to humans than to apes. The article then says:

If this identification be accepted, then, for the time being, America can lay claim to have been the home of the oldest ape-like man, or man-like ape, yet discovered.

Not everyone was as excited about the finding, which came to be widely known as Nebraska Man, and there was skepticism from other experts who disagreed with the unidentified ape hypothesis. Dr. Arthur Smith Woodward, keeper of geology at the British Museum of Natural History, maintained that the tooth highly resembled the last lower molar of extinct primitive bears belonging to the genus Hyaenarctos, which were already known to be in the American fossil record. According to Woodward, the tooth was more like that of a carnivore than a primate, and that it was more likely to be the tooth of a known extinct bear than that of some unknown large primate. Professor Osborn himself would later come to the conclusion that it was the remains of an extinct species of peccary called Prosthenopps.

Despite this skepticism, Smith adhered to the theory that it was the tooth of a primate, pointing to careful x-ray analysis of the tooth and examination of the characteristics of the pulp cavity that strongly suggested that it was that of “a primate, in some respect, like the chimpanzee, but definitely more human rather than ape-like.” It certainly would have interesting implications for the possible existence of large hairy hominids in North America that could account for reports of bipedal ape-men such as Sasquatch. Although the “Nebraska Man” incident is sometimes accused of being a hoax or misidentification of some other prehistoric creature, it is a curious case nonetheless, and is still discussed to this day.

It is frustrating that some of these old newspaper articles and accounts hint at concrete physical evidence, which is the Holy Grail of cryptozoology, yet no other information is forthcoming as to what the ultimate fate of such evidence was or what its ultimate status is, with some of these issues still hotly debated. Whatever happened to those supposed remains of the Orang Pendek that were found? To be sure, the stored away collections of museums undoubtedly hold amazing new discoveries that have remained hidden away because they were either misidentified at the time, not recognized for what they were, or simply filed away and forgotten. What did Grafton Elliot Smith see and what were his findings? Where did his photographs and casts go? Were there perhaps other discoveries that he was privy to and which have similarly been lost to time? These are all just more layers to this mysterious and influential figure of anthropology, and perhaps cryptozoology as well.